Welcome to Retro Television Reviews, a feature where we review some of our favorite and least favorite shows of the past!  On Mondays, I will be reviewing Hang Time, which ran on NBC from 1995 to 2000.  The entire show is currently streaming on YouTube!

The season has finally begun.  Julie won one game.  Michael lost one game.  Danny and Sam are now a couple.  Will Deering High continue its winning/losing ways?  Let’s find out!

In order to shake up the team and hopefully have a winning season, Coach Fuller decides to switch around everyone’s positions.  I have to admit that, while watching this episode, I was forced to reflect on how little I actually know about basketball.  For instance, I was stunned to discover that the players have specific positions.  I honestly thought that everyone just ran around the court and tried to steal the ball.

Chris isn’t happy about having to switch positions because he thinks that it might make it more difficult for him to get a college scholarship.  (Chris is like 5’7 so maybe it would be a good idea for him to at least consider other options.)  Chris resigns as team captain.  Coach Fuller appoints Danny as the new team captain.  Teams have captains?  I’m learning a lot from this show.  Eventually, Chris learns to put the team first and Danny hands the captainship (or whatever it’s called) back over to him.

In the B-plot, Michael gets a job working at Earl’s farm.  Chaos ensues but Michael learns an important lesson about how difficult farm work is.

This episode had one good joke, in which Mary Beth sent Coach Fuller a legal summons because her father gave her an attorney for her birthday and she figured she should make use of her presents.

Otherwise, this episode had a bit too much basketball for me, which is obviously kind of a silly complaint to make about a show that’s about basketball.  I have to admit that this show doesn’t do much for my rebellious spirit.  The main lesson was always to listen to the coach and put the team first.  Bleh.  BE A REBEL!

Deering High has a game coming up against their hated rivals, Valley High …. oh wait a minute. Sorry, Valley High was Bayside’s rival. Deering High is going up against Dover High. Earl, however, is flunking history. He has to pass his big midterm if he’s going to play. Unfortunately, a new girl is distracting Earl from studying. She’s making him stay up late and kissing him whenever he tries to study. It turns out that it’s all a plot to keep Earl from playing in the game, like that time Valley stole Screech’s lucky beret right before the big chess match. After Earl’s new girlfriend framed him for cheating on the test, Coach Fuller declared, “You let your team down, Earl.”

Good Lord, is it a team or is it a cult?

Anyway, everything works out due to the TNBC law of people always doing obviously stupid stuff. Immediately after Earl gets kicked off the team, Earl’s fake girlfriend started making out with a player on the other team in Deering High’s gym, right in the middle of the Deering/Dover game. Anyway, once it becomes clear that Earl was framed, he’s allowed to rejoin the team and Dover gets destroyed. Yay!

The B-plot dealt with a prank war between Julie and Danny. Remember the Bayside/Valley prank war?

My point is that this was pretty much a Saved By The Bell episode that got reused on Hang Time. That said, Robert Michael Ryan gave a pretty good performance as Earl and you actually did feel sorry for him when he discovered how cruelly he had been treated. Earl was just too innocent for this world.

Will Deering continue to win their games? Check back next week to find out! 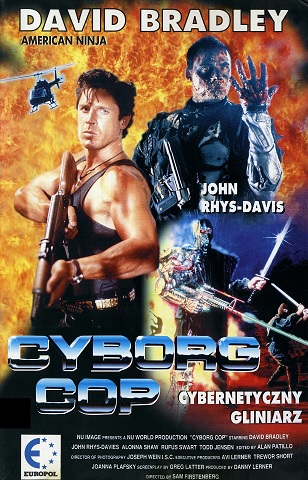 As some of our regular readers undoubtedly know, I am involved in hosting a few weekly live tweets on twitter.  I host #FridayNightFlix every Friday, I co-host #ScarySocial on Saturday, and I am one of the five hosts of #MondayActionMovie!  Every week, we get together.  We watch a movie.  We tweet our way through it.

Tonight, for #MondayActionMovie, the film will be 1993’s Cyborg Cop!  Selected and hosted by BunnyHero, Cyborg Cop stars David Bradley and John Rhys-Davies.  It’s a film about a cyborg who is a cop! The movie starts at 8 pm et and it is available on YouTube.

Following #MondayActionMovie, Brad and Sierra will be hosting the #MondayMuggers live tweet.  We will be watching 1987’s Best Seller, a classic thriller starring James Woods as an assassin and Brian Dennehy as the cop-turned-author who Woods wants to tell his story.  Both Dennehy and Woods give excellent performances in this conspiracy-themed thriller.  It is available on both Prime and Tubi and it starts at 10 pm et.

It should make for a night of intense viewing and I invite all of you to join in.  If you want to join the live tweets, just hop onto twitter, start Cyborg Cop at 8 pm et, and use the #MondayActionMovie hashtag!  Then, at 10 pm et, start Best Seller and use the #MondayMuggers hashtag!  The live tweet community is a friendly group and welcoming of newcomers so don’t be shy.  And reviews of these films will probably end up on this site at some point over the next few weeks. 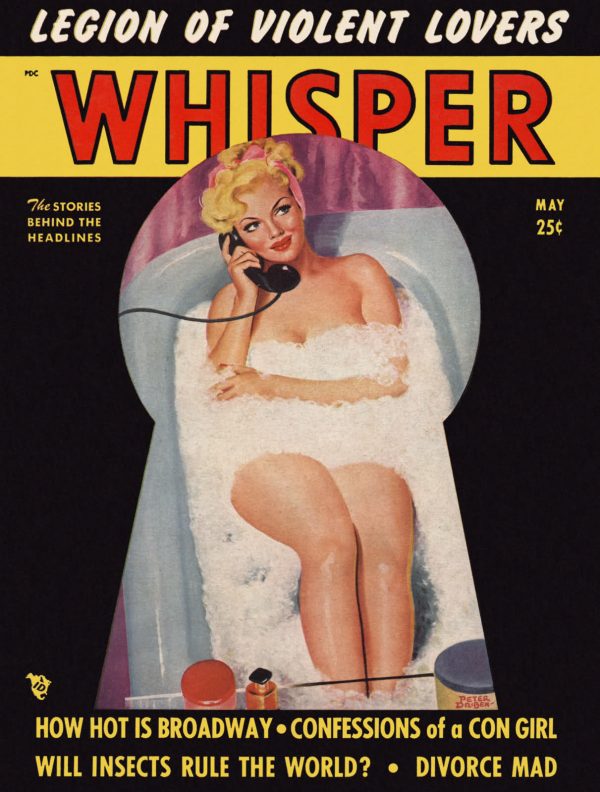 Whisper  was a pulp magazine that was published in the 40s and the 50s.  It promised “a look through the keyhole” and the majority of the stories were about public and private scandals.  Today, the scandals are forgotten but Peter Driben’s cover art is remembered and sought by collectors.

Here is a sampling of the covers of Whisper.  All of these were illustrated (and signed) by pin-up artist Peter Driben.  As with most of Driben’s pin-up covers, the models are meant to be both sexy and innocent at the same time.  The headlines provide a look at what was once considered to be shocking in America. 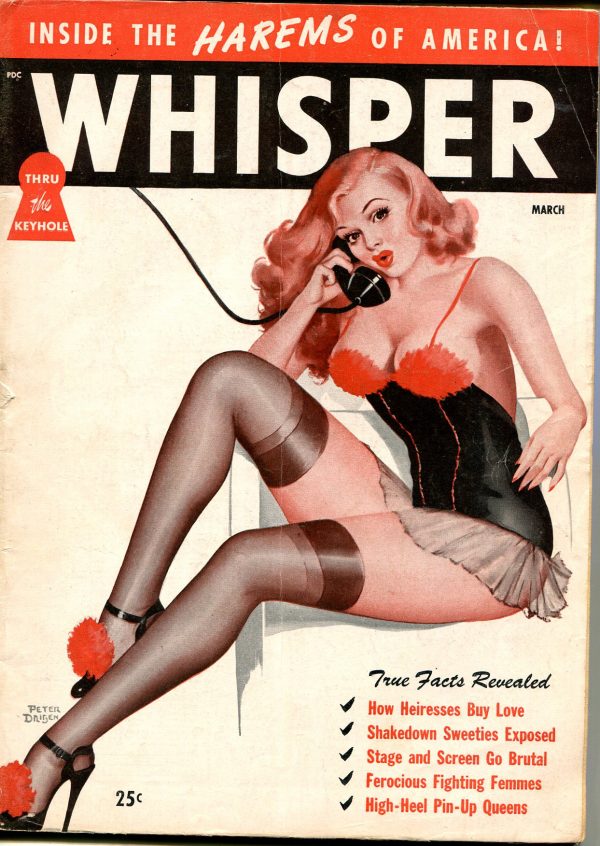 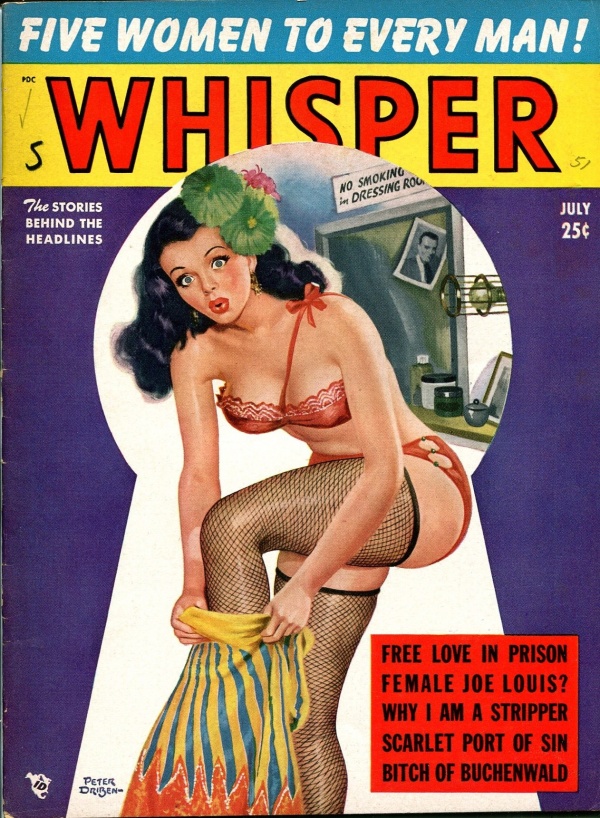 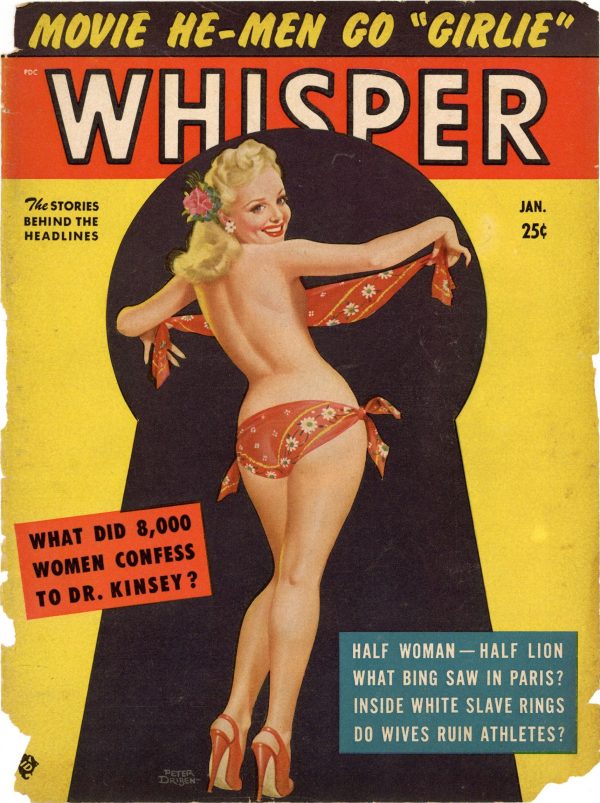 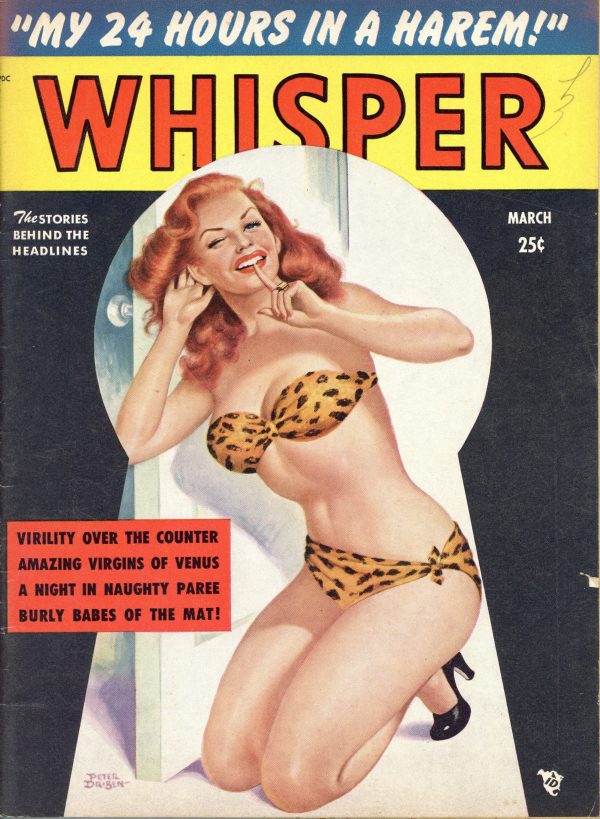 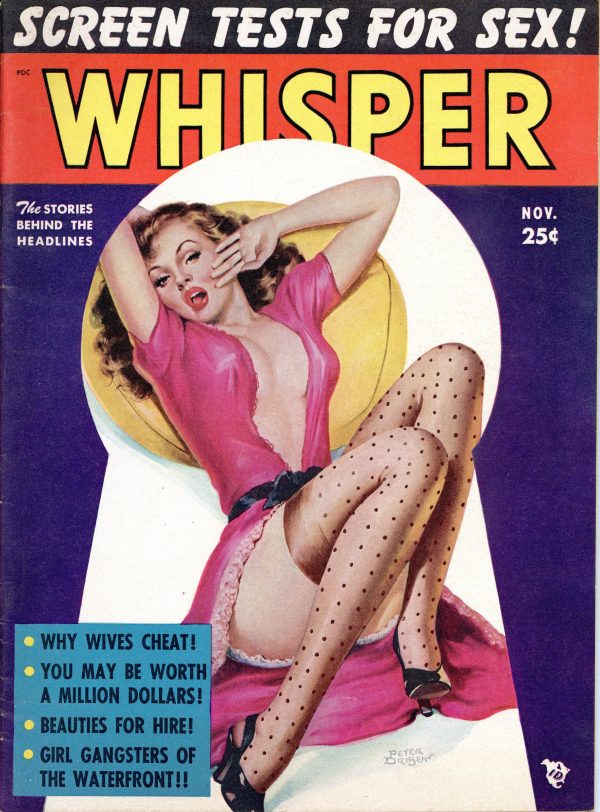 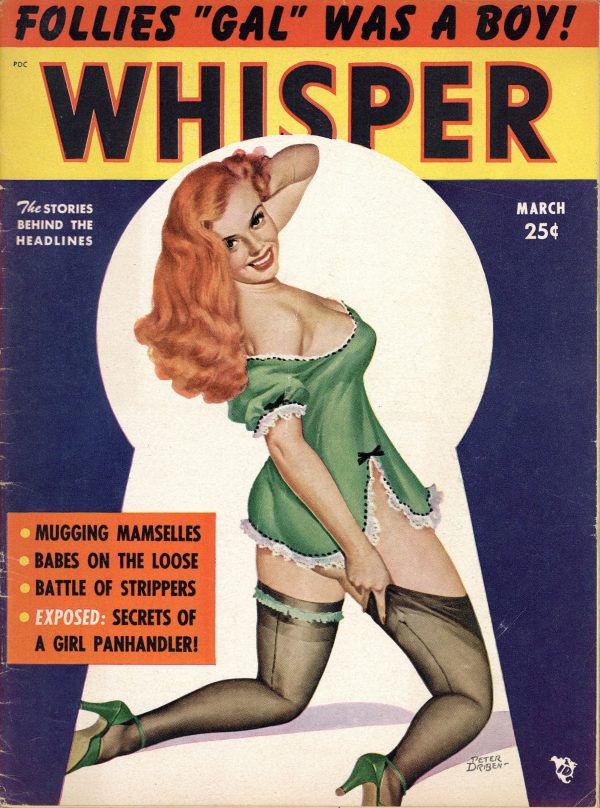 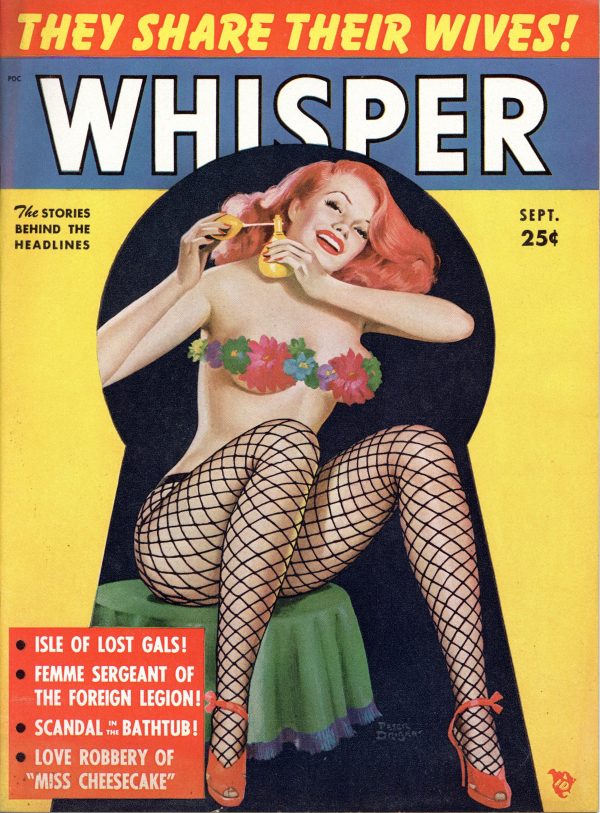 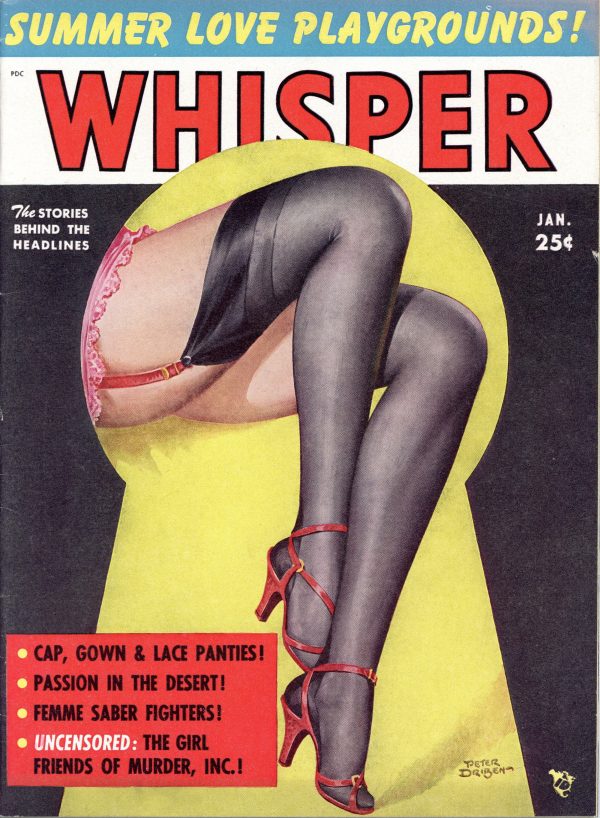 I’ve always liked this sign.  You should always be prepared.


In today’s music video of the day, Genesis takes ua on a tour of Los Angeles in 1980.  Technically, the video is actually about Phil Collins driving around the city and searching for his girlfriend but mostly, that was just an excuse to show off Los Angeles and to perhaps announce that the new, post-Peter Gabriel Genesis was ready to conquer Hollywood.

According to Tony Banks, this song was meant to serve as an homage to the Beach Boys.  That probably explains Phil’s Hawaiian shirt.

This video was directed by Stuart Orme, who directed several videos for both Genesis as a group and Phil Collins as a solo act.