For as long as I can remember, I always wanted to fall in love with a gangster.

How I Fell In Love With A Gangster is a three hour Polish film, one that the audience is told is based on the true story of Nikodem ‘Nikos’ Skotarczak (played by Tomasz Wlosok), a career criminal who became a bit of a celebrity in Eastern Europe during the late 80s and 90s.  The film follows Nikos from his unhappy childhood in Poland to his time as one of Eastern Europe’s most notorious car thieves.  He assembles his own crew and, while he does steal a lot of cars, he also seems to be a rather amiable criminal.  He’s not the type of criminal who kills people or who even threatens to kill people.  Instead, he’s just looking to make some extra money, have a good time, and defy anyone who would try to tell him what to do.  He’s the type of criminal who would rather deal with trouble by escaping out a window than by drawing a gun.  At least from the way that he’s portrayed in the film, it’s hard not to like him.  As more than one character points out, he’s hardly a gangster.

Unfortunately, things change.  Nikos does a few stints in prison.  Each time he gets out, he discovers that the underworld had become a bit more violent and that it’s becoming increasingly more difficult to stay loyal to his old business associates.  He may not be a gangster but the people around him definitely are.  The cops are still after him.  Two rival gangs expect him to support them in a gang war.  Nikos just wants to snort cocaine, spend time with his latest wife, and try to be a good father but none of that turns out to be as easy as he was hoping.  Also haunting Nikos is his own belief that his family has been afflicted with a death curse.  Every six years, one of his relatives dies violently.  Eventually, Nikos believes, it will be his turn.

It’s a bit of an odd film.  The story features a framing device, in which a young reporter interviews an older woman who was in love with Nikos.  The majority of the film is told in flashback but, throughout the flashbacks, Nikos’s friends and business partners often break the fourth wall and talk straight to the audience.  Occasionally, this is used to good effect but it still leaves the viewer wondering just who exactly is telling the story.  The film’s 3-hour running time also feels excessive.  For every scene that really works (and there are quite a few), there are other scenes that are a bit too derivative of other gangster films.  As soon as Nikos partnered up with a criminal named Silvio, it was obvious that the audience had reached the part of the film where the clever and honorable criminal mastermind would have to deal with an out-of-control subordinate.

Flaws and all, the film did work for me.  A lot of that was due to Tomasz Wlosok’s charismatic performance as Nikos.  Over the course of the film, Nikos went from being a fun-loving, hyperactive criminal to being a rather sad and defeated middle-aged man, isolated from his former associates and waiting for fate to intervene.  Wlosok was never less than compelling in the role.  Though the soundtrack was occasionally a bit too on-the-nose, the use of Moby’s One Of These Mornings added a certain poignance to the film’s final scenes.  Finally, the film itself looked great, providing a nice contrast between the industrial drabness of communist-controlled Eastern Europe and the neon-infused glory of Nikos’s life as a criminal.  In the end, Nikos emerges as a tragic figure, a man who just can’t understand how or why the underworld has suddenly become such a dangerous and unforgiving place. 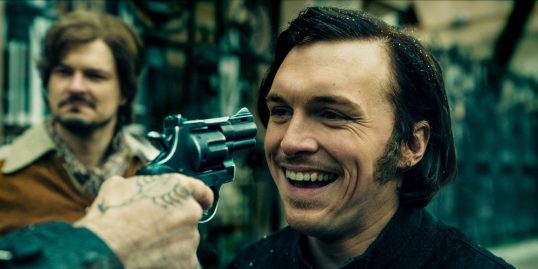 2 responses to “International Film Review: How I Fell In Love With A Gangster (dir by Maciej Kawulski)”