You have to admire the courage of a filmmaker like Darren Aronofsky.  After receiving some overdue Oscar love for Black Swan, Aronofsky probably could have settled into the type of career that Tim Burton currently has: i.e., the self-styled quirky director who makes safe studio films.  Instead, Aronofsky has continued to chart his own course as an artist by following up Black Swan with two films that seemed specifically designed to challenge audiences and annoy the complacent.

With Noah, Aronofsky dared to suggest that God’s mistake with the Great Flood was to allow anyone to survive at all.  Then, he followed up Noah with 2017’s mother!, which was a film that practically dared confused and alienated audience members to stand up and walk out.  And walk out they did.  mother! was one of the few films to score an F on Cinemascore.  I mean, typically, a bad movie will at least get a C.  You have to really piss off the audience to get that F rating.  Watching mother!, it’s obvious that pissing off the audience was a part of the film’s design.

Paramount Picture advertised mother! as being a horror film and, to a certain extent, it is.  Jennifer Lawrence plays the Mother.  She lives in a beautiful house with a poet named Him (Javier Bardem).  Him spends a lot of time talking about how much he loves the Mother but it quickly becomes apparent that he’s rather self-absorbed.  People are constantly showing up at the house to speak to and eventually worship Him and he continually lets them, regardless of how difficult it makes things for the Mother.  The Mother is reduced to begging people not to make a mess but no one listens to her.  As the crows gets bigger, fights break out.  There are sounds of war and explosions rock the Mother’s meticulously cared-for home..  Him can only smile and shrug while his visitors trash the house.  The more the Mother complains, the more cruelly she’s treated by the crowds.

Among those who show up are the Man (Ed Harris) and the Woman (Michelle Pfeiffer).  They have two teenage sons who have developed a dangerous rivalry.  Him seems to be very concerned with them but the Mother just wants them all to leave.  Once they finally do leave, Him is inspired to write his greatest work which, of course, just leads to more people showing up.  It’s a dangerous cycle….

I could actually relate to what the Mother was going through.  I tend to be a little bit on the neat side, which is a polite way of saying that I’m obsessed with keeping the house clean and tidy.  Nothing annoys me more than when a stranger comes in and drags dirt or leaves or whatever across a freshly vacuumed carpet.  When Jennifer Lawrence was reduced to begging people to just make the most basic effort towards not messing up the house, I totally sympathized with her.  Jennifer Lawrence yells so much in this movie that she actually starts to lose her voice in a few scenes.  I could relate.

Of course, Jennifer Lawrence is not just playing a homeowner who doesn’t want her house to get trashed.  And Bardem isn’t just playing a poet.  As you probably already guessed, Bardem is God and Jennifer Lawrence is the Earth and Ed Harris and Michelle Pfieffer are a surprisingly old version of Adam and Eve.  The entire film is a biblical allegory and it all gets a bit heavy-handed.  Aronofsky has said that the film was a result of “anger and anguish” but it’s obvious that all of that anger and anguish prevented him from considering that mother! would have worked better as a 15-minute short film than a two-hour epic.  It doesn’t take long to figure out what’s going on and the film occasionally gets almost embarrassingly obvious in its attempt to push it metaphor.  Aronofsky, at times, seems to think that his film is more enigmatic than it actually is.

Still, despite the fact that the film goes on for way too long and is never quite as much of a mindscrew as Aronofsky seems to think that it is, you have to admire not only the courage of Aaronofsky but also the dedication of Jennifer Lawrence.  This film was not the first high profile Jennifer Lawrence film to not be a hit with audiences (Passengers wasn’t exactly beloved) but it is the one that’s most often cited whenever anyone writes an article about why Jennifer Lawrence’s star is a bit dimmer today than it was back in the days of The Hunger Games.  Undoubtedly, some people did go to the film expecting to see a “typical” Jennifer Lawrence film, just to suddenly be confronted with Javier Bardem ripping her heart out of her chest.  But, at the same time, you have to appreciate a star who is willing to take a chance and that’s what Lawrence did her, lending her star power to a project that was thoroughly out of the mainstream.  Both Aronofsky and Jennifer Lawrence took a chance with mother! and, even if the film is not quite the triumph that some viewers may want it to be, you still respect them for having done so. 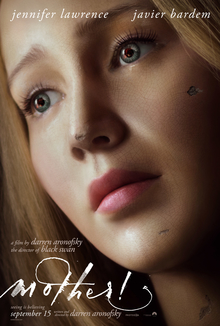