“Where are you going?  The party’s just begun.”

Sorry, Angela, the party kind of sucks.  Beyond the strange guest list — like seriously, why would any of these people be hanging out together — and the weird decision to hold it in the deserted old funeral home, there’s the fact that people are getting possessed and people are dying.  There’s a lot that I can tolerate from a party but once people start dying, it’s usually time to leave.

(Unless, of course, it’s a theme party.  I went to a Halloween murder party last year and I had a lot of fun watching as each guest was “killed off” until the eventual killer was revealed.  I drew a card telling me that I had been murdered in the master bathroom while stepping out of the shower so I ran upstairs, changed into a towel, and let out the loudest scream possible.  Now, that was a party!  That said, I can’t remember who the actual killer was so they’re still out there, probably breaking into your house at this very moment.)

As Jeff, Leonard, and I watched Night of the Demons last week as a part of the #ScarySocial live tweet, Jeff mentioned that this 1988 film had apparently been very popular on late night cable back in the day.  I could certainly see why, what with it’s combination of boobs, blood, and Linnea Quigley.  It’s about two outcasts — Angela (Amelia Kinkade) and Suzanne (Quigley) — who throw a Halloween party in a funeral parlor.  It’s a pretty boring party but it’s also an 80s party so we get to see some silly dancing before the spirits end up possessing Suzanne and Angela.  Angela does a wild dance.  Suzanne sticks a tube of lipstick into her breast.  I guess you can do that when you’re possessed by a demon.  That said, that scene still made cringe just because it made me think about all of the lipstick that I shoplifted when I was in high school and how much it would have upset to me to have gone to all that trouble just to have some possessed girl waste it by shoving it inside her boob.  One-by-one, the partiers die.  Soon, only good girl Judy (Cathy Podewell) and good guy Rodger (Alvin Alexis) are left alive but will they be able to figure out a way to escape the funeral home?  Not only do they have to climb a wall but they have to do it while dressed, respectively, like Alice in Wonderland and a pirate.  Good luck, kids!  You’re so fucking dead.

Anyway, Night of the Demons is pretty stupid but it’s a film that people have fun watching.  There’s none of the nuance that one found in Kevin Tenney’s other classic horror film, Witchboard.  Instead, this one is entertainingly over-the-top and enjoyably weird.  This is a film that was made for people who enjoy making snarky comments while watching horror movies.  As a result, it’s an ideal live tweet movie because it doesn’t require a lot of thought as much as it just requires a group of friends who are willing to validate your every comment by clicking the like button.  It’s not a particularly scary film but both Amelia Kinkade and Linnea Quigley deserve a lot of credit for throwing themselves into their roles and, at the very least, it’s got some dancing.  It’s a crowd pleaser and, I’ve recently been told, some people feel that’s the most important thing that a film can do.  Personally, being a film snob, I don’t quite agree with the assessment that it’s the most important thing but, still, one should probably never discount the importance of keeping the audience entertained.

The point is, I had fun with Night of the Demons.  Watch it with your friends. 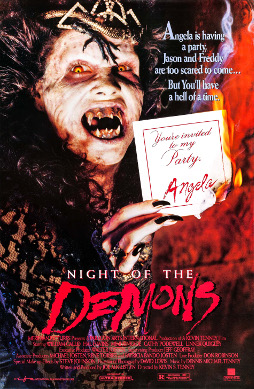