The 1984 film, Massive Retaliation, was made before I was even born but I still feel as if it was specifically designed to annoy me.

The movie begins with an endless folk song playing over the opening credits.  It’s one of those peace and love folks songs that goes on forever.  I recently did some research on the folk music of the 50s, 60s, and 70s and what I discovered is that folk singers were (and are) essentially the most self-important people on the planet.  (Pete Seeger apparently went to his grave convinced that he was single-handedly responsible for getting Lyndon B. Johnson to withdraw from the 1968 presidential election.)  When a film about nuclear war opens with a folk song, it’s never a good sign.

The film then cuts from the folk singers to a bunch of screaming kids in a van.   I mean, seriously …. AGCK!  The kids are on a road trip and the van is being driven by their older brother, Eric (Jason Gedrick).  Eric tries to keep the kids quiet but it doesn’t work, mostly because Eric is kind of a wimp.  Unfortunately, Eric picked the wrong time to go on a road trip because it looks like a nuclear war is about to break out and his parents and their friends are all heading up to a compound that they built up in the hills.

(It’s supposed to be a secret compound but it’s sitting right out in the open and there’s a paved road leading up to it so ….. yeah.  Good job.)

Anyway, the first half of the movie is divided between scenes of the adults and the kids heading to the compound.  This leads to the two groups encountering a lot of other people who are reacting to the threat of war.  This also leads to a lot of half-baked monologues about war and human nature.  The rednecks are excited about the prospect of the world ending.  Eric’s dad (Peter Donat) is looking forward to restarting civilization in the compound.  Every old person who shows up in the movie says something like, “There’s always been a war.”  The film tries way too hard to be profound, which is always an annoying trait.

Eventually, Bobcat Goldthwait shows up as a member of an evil redneck crew who wants to steal some gasoline.  Despite the fact that this is meant to be a serious film, Goldthwait uses a variation of his Bobcat voice in the role and it creates a weird effect.  Perhaps that’s the message of the film.  When society collapses, comedians will become warlords….

Anyway, Massive Retaliation is one of those self-righteously liberal and largely humorless films has a lot that it wants to say about war and humanity and society but …. eh.  Who cares?  I mean, I guess if I wanted to, I could make the argument that there are parallels to the film’s depiction of society collapsing over the possibility of war to the way some people are reacting to the COVID-19 pandemic but that would just be me trying to make this film sound more interesting than it actually is.  To be honest, the best thing about the film is the poster below, which looks like it was made for a different, better movie: 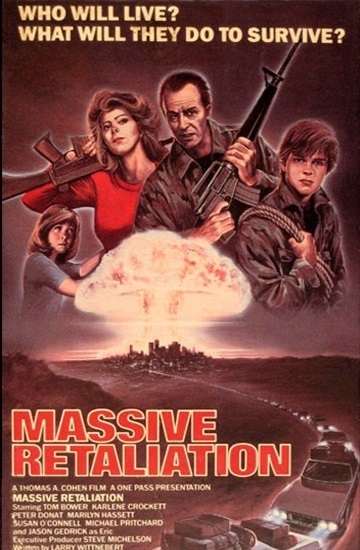 Massive Retaliation is nowhere as fun as this poster.  Instead, it’s a film that begins with folk music and ends with children forming a circle of peace.  Seriously, was this film just made to give me a migraine?

One response to “Film Review: Massive Retaliation (dir by Thomas A. Cohen)”