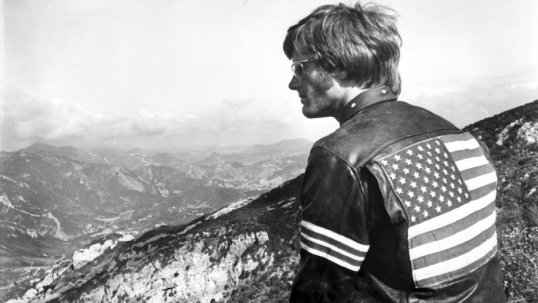 Peter Fonda has died from complications due to lung cancer.  He was 79 years old.

As an actor, Peter Fonda never got as much respect as the rest of this family.  Unlike his sister or his father, he never won an Academy Award, though he was nominated for two of them (one for writing Easy Rider and another for starring in Ulee’s Gold).  During the late 80s and the 90s, he was better known for being Bridget Fonda’s father than for the majority of the films that he appeared in during that time.  While the rest of his family was appearing in prestige pictures and working with directors like Fred Zinnemann, Sidney Lumet, William Wyler, Francis Ford Coppola, and Quentin Tarantino, Peter Fonda spent most of his career appearing in B-movies.  But today, many of those B-movies are more fondly remembered than the big films that he missed out on.

Peter Fonda made his film debut in 1963, playing the romantic lead in Tammy and the Doctor.  Fonda hated the film and often called it Tammy and the Schmuckface.  After that less-than-stellar beginning, Peter went on to find his groove as a lifelong member of the Hollywood counterculture.  In the classic biker film, The Wild Angels, he played Heavenly Blues and let the world know that all he wanted to do was “get loaded and have a good time.”  In The Trip, he played a disillusioned television director whose world is turned upside down by acid.

And then there was Easy Rider.  In this seminal independent film from 1969, Peter played Wyatt, a.k.a. Captain America.  Wyatt was the biker and drug smuggler who went “searching for America and couldn’t find it.”  This was Peter Fonda’s most famous role.  Along with acting in the film, he also produced it and co-wrote it.  (He was also responsible for keeping Dennis Hopper under control.  Or, at least as under control as anyone could keep Dennis Hopper in 1969.)  The role made Peter Fonda a symbol of rebellion, an American icon riding across the desert with the American Flag literally on his back.  Today, we still debate what Wyatt meant when he said, “We blew it.”  Peter Fonda, himself, later said that he was delivering the line as himself and not as Wyatt because he was convinced that Easy Rider would be a career-ending flop.

In the 70s and 80s, Fonda continued to play rebels.  His subsequent films were never as successful as Easy Rider, though many of them are still entertaining.  Peter made his directorial debut in 1971, with The Hired Hand, an elegiac and thoughtful Western in which Peter co-starred with another cult icon, Warren Oates.  Years later, Fonda would be among the many celebrities who made a cameo appearance in The Cannonball Run.  Of course, Peter played a biker and he got to fight Jackie Chan.

In the 90s, Peter Fonda played a lot of old hippies in many forgettable films.  However, in that decade, he also gave two of his best performances.  In The Limey, Fonda played the music producer who Terrence Stamp holds responsible for the death of his daughter.  And, in Ulee’s Gold, Fonda played a cantankerous bee keeper who finds himself taking care of his two granddaughters.  It was a role that many could imagine having once been played by Henry Fonda.  For Ulee’s Gold, Peter was nominated for an Oscar.  He lost to his co-star from Easy Rider, Jack Nicholson.

Peter Fonda continued to work up until his death.  With his passing, America loses another screen icon and a man who epitomized an era.  Rest in Peace.