(The Sundance Film Festival is currently taking place in Utah.  This week, I am reviewing films that premiered at and/or received a prize at Sundance.  Tonight, I take a look at the 2013 film, Blue Caprice.) 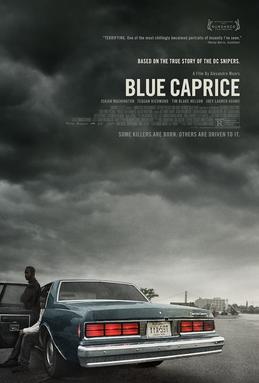 When we first meet Lee (Tequan Richmond), he is fifteen years old and living in poverty in Antigua.  One morning, he watches as his mother gets in a car with a strange man.  Before she goes, she tells Lee that she has no choice but to leave and that she will return.  Lee says nothing as his mother is driven away.

Lee’s mother doesn’t return.  Lee spends his time sitting in an empty house.  He wanders through the nearby woods.  Sometimes, he goes to a nearby town and walks around aimlessly.  It’s in that town where he first sees John (Isaiah Washington).  John is an American who is living on the island with his three children.  John spots Lee watching him and soon, Lee is eating dinner at John’s house.  John’s children ask if Lee is going to be living with them.  John says that he doesn’t know.  They ask if they can see their mother.  John explains that, if they see their mother, they’ll no longer be able to spend time with him.

Months later, John and Lee are in Tacoma, Washington.  The children are back with their mother.  John tells Lee that America is full of lies.  He says that all women lie.  He says that the army lied to him.  John says that he just wants to get his children back.  John tells everyone that they meet that Lee is his son.  John says that he loves Lee but, when John visits an old girlfriend, he has no hesitation about telling Lee to go walk around for a while.  Lee ends up staring at the speaker at a fast food drive-through in amazement.  “Do you have cheap burgers?” he asks.

John and Lee keep moving and eventually end up living with an old army friend of John’s.  Ray (Tim Blake Nelson) is a good-natured redneck.  He enjoys playing video games, smoking weed, and shooting guns.  When Lee shoots one of Ray’s guns, Ray declares Lee to be a natural.  John stares at the gun in Lee’s hand.

When he’s not trying to track down his ex-wife and children, John trains Lee.  He ties Lee up and abandons him in the woods, forcing Lee to figure out how to escape.  (“DAD!” Lee shouts as John walks away from him.)  He gives Lee a sniper manual to study.  He explains to Lee that the first step to destroying society is to make people panic.  He says that it’s important to kill random people.  After killing a man, they’ll kill a woman.  After killing a woman, they’ll kill a child.  No one will feel safe.  When Lee shows reluctance about John’s plans, John demands to know if Lee loves him…

Blue Caprice is based on a true story.  In 2002, John Muhammad and Lee Malvo shot 27 people in Maryland, Virginia, and Washington, D.C., killing 17 of them.  The title of the film comes from the car that Muhammad and Malvo lived in during their shooting spree.  Significantly, throughout the film, John and Lee are referred to only by their first names. Though the film may have been inspired by their actual crimes, Blue Caprice never claims to be an exact recreation of what happened.  Instead, the film speculates about how John was able to turn a directionless teenager into a killer.

It makes for a chilling film.  Isaiah Washington plays John as being a chameleon, a man who is so empty on the inside that he’s become very good at fooling people into believing that he’s whatever they want him to be.  John is the type who can spend the morning plotting to overthrow the government, the afternoon trying to fool a school principal into telling him where his children are now living, and the evening grilling burgers and laughing with the neighbors.  The film leaves no doubt to John’s evil but it’s attitude towards Lee is more ambiguous.  Tequan Richmond captures the transformation of Lee from being a withdrawn teenager to a cold-blooded killer.  Was Lee capable of being a killer before he met John or was he transformed by the older man?  That’s the question that both the film and the audience struggles with.

Blue Caprice got good reviews when it played at the 2013 Sundance Film Festival, thought it was ultimately overshadowed by Fruitvale Station.  It’s a disturbing film and not an optimistic one, which is perhaps why, post-Sundance, it never received quite as much attention as it deserved.  It may not be a pleasant film to watch but it is one that definitely leaves an impression.