(Hi there!  So, as you may know because I’ve been talking about it on this site all year, I have got way too much stuff on my DVR.  Seriously, I currently have 166 things recorded!  I’ve decided that, on February 15th, I am going to erase everything on the DVR, regardless of whether I’ve watched it or not.  So, that means that I’ve now have only have a month to clean out the DVR!  Will I make it?  Keep checking this site to find out!  I recorded Fatherly Obsession off of the Lifetime Movie Network on December 26th, 2017!) 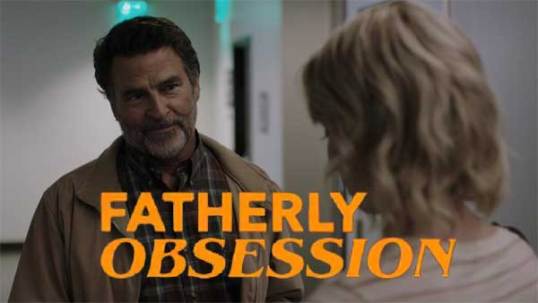 Alyssa Haroldosn (Molly McCook) is a stand-up comedian who has recently moved from Jackson Hole, Wyoming to Los Angeles.

That makes sense, doesn’t it?  I mean, I’ve never been to Wyoming, though I did once live in Colorado and I imagine that’s kind of like being in Wyoming.  Still, I imagine that there’s probably more opportunities for a comedian in L.A. than in Jackson Hole.  Then again, it also seems like there would be considerably less competition in Wyoming than in California.  Actually, if Alyssa really wanted to go some place with no competition, she should have moved to Colorado.  Nobody’s funny in Colorado…

But, to get back to the movie, it turns out that Alyssa didn’t just move for her career.  She also moved because 1) her family was way too clingy and 2) she had a stalker.  When we first meet her, she’s living in a cheap motel room and calling 911 nearly every night.  But then she’s lucky enough to meet a handsome realtor named Oliver (Jack Turner).  Oliver not only appreciates a good fish taco but he also knows of a good, empty apartment!

There’s only three issues with the apartment:

You can probably already guess what happens but Fatherly Obsession does add a few new elements to the typical Lifetime stalking formula.  When Robert — like all Lifetime stalkers — spies on Alyssa’s apartment, he doesn’t just watch her on his computer.  No, Robert uses virtual reality glasses!  What that means is that, at random moments, Robert materializes in Alyssa’s apartment and watches her go about her day.  It’s a nicely creepy twist to the usual Lifetime formula.

The biggest problem with Fatherly Obsession is that Alyssa’s a comedian and, as a result, the dialogue is often excessively quippy.  I spent the first half of the movie worried that Alyssa was going to spend the whole movie almost exclusively speaking in one liners.  Then Oliver started talking about fish tacos and I was just like, “Oh my God!  MAKE IT STOP!”

But the film got better as it went along.  Though her character sometimes drove me crazy, Molly McCook did a good job of capturing both the pain of being a stalked and the difficult of recovery.  Ted McGinley was also incredibly creepy as Robert.  Fatherly Obsession was a typical Lifetime stalking film but it had enough interesting moments to make it worthwhile for fans of the genre.

3 responses to “Cleaning Out The DVR: Fatherly Obsession (dir by Daniel Ringey)”