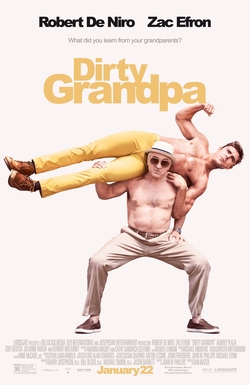 Epix is doing a free preview this weekend so, earlier tonight, I watched Robert De Niro and Zac Efron in Dirty Grandpa.  You may remember Dirty Grandpa as being the film that came out in January and made a ton of movie despite the fact nobody will admit to having seen it.

Myself, I hope that the cast of Dirty Grandpa was paid in cocaine because then, at the very least, I could be assured that they had a better time making the movie than anyone else has had watching it.  The plot, as it is, features De Niro as a widower who is obsessed with getting laid and Efron as his straigher-than-straight grandson who takes him down to Daytona for Spring Break.  Efron is engaged to Meredith (Julianne Hough) who we’re supposed to dislike because of …. reasons, I guess.  The film certainly hates her, even though all she’s trying to do is plan a nice wedding.  De Niro would rather Efron get together with a boring political activist (Zooey Deutch).  Meanwhile, De Niro himself is obsessed with Deutch’s friend, played by Aubrey Plaza.

Anyway, this is one of those films that’s even worse than it sounds.  The pacing is so off that even the scenes that should work fall flat and visually, the film resembles a high quality YouTube video.  The majority of the humor is racist, misogynistic, and homophobic (but, of course, we’re not supposed to notice because the “good” girl is vaguely defined as being a liberal political activist).  Zac Efron, who is really only a credible actor when he’s playing dumb (read into that whatever you want), is miscast as someone who actually has something that’s going on in his life and Aubrey Plaza, one of the most unique comedic performers working today, is almost totally wasted.  Both Zooey Deutch and Julianne Hough struggle within the confines of a script that obsessively hates women.

As for Robert De Niro, his performance actually isn’t that bad.  But that doesn’t change the fact that he’s Robert freaking De Niro playing a role that could have just as easily been performed by Johnny Knoxville in old age makeup.

Anyway, I watched Dirty Grandpa because I wanted to see if it was as bad as everyone said it was and it was.