I have to admit that, as much as I love watching old movies, there’s a part of me that’s more than ready to move onto the next Mill Creek box set, the Nifty Fifties.  But, before I do that, I have to finish up the Forties.  Fortunately, I just watched the 25th film included in the Fabulous Forties and I am happy to say that I am now halfway done with this project!  Yay!

As for the film itself, it’s a 63-minute film from 1941.  Though it was later retitled Drums of Africa, it was originally called Jungle Man.

As for what Jungle Man is about … well, it’s mostly about stock footage.

There is kind of a plot.  Wealthy Bruce (Weldon Heyburn) and his friend Alex (Robert Carson) want to go to Africa so that they can see the legendary City of the Dead.  Bruce’s fiancée, Betty (Sheila Darcy), decides to accompany them because she wants to visit her brother (Charles Middleton), a missionary.  Once they get to Africa, they also meet a doctor (Buster Crabbe) who is trying to find a cure for a fever that is wiping out the native population.

(Of course, tigers don’t live in Africa but that’s just the type of film this is!)

Even when our heroes finally reach the City of the Dead, we don’t actually see them walking around the city.  Instead, we see them staring into the distance and then immediately cut to some still shots of what Wikipedia identifies as being Cambodia’s Angkor Wat.  Of course, no attempt is really made to match any of the shots.  If Jungle Man was made today, they could just CGI the Hell out of it.  But since it was made in 1941, audiences had to suspend their disbelief and accept shots that didn’t particularly match up with any other shots and a storyline that was pretty much determined by whatever stock footage the producers had available.

On the plus side, it’s only 60 minutes long and some of the stock footage is fun, particularly if you like cute monkeys or fierce tigers.  For the most part, it’s silly but inoffensive.

And you can watch it below! 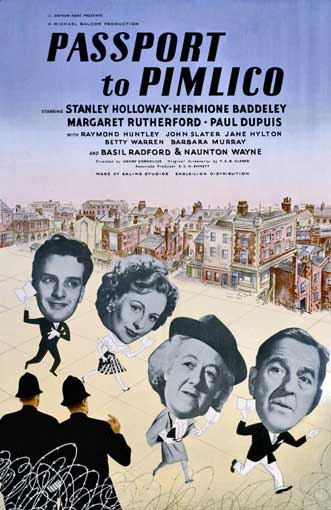 Passport to Pimlico opens in London.  World War II may be over but the city is still in the process of rebuilding.  War-time rationing is still in effect and all the residents of Pimlico regularly have to deal with the endless red tape of bureaucracy.  As well, there’s still unexploded German bombs littered around the neighborhood.  When a group of local children accidentally blow one of those bombs up, it leads to the discovery of a previously hidden cellar.  Inside the cellar is everything you could hope to find in a mysterious room: artwork, jewelry, and coins.  There’s also a parchment from the 15th Century, in which the king of England ceded the neighborhood to the final Duke of Burgundy.  Because no one knew that the charter existed, it has also never been revoked.  As a result, all of the citizens of Pimlico are actually citizens of dukedom of Burgundy.

That means two things: First off, the citizens are legally required to live under the laws of Burgundy, despite the fact that the dukedom no longer exists and those laws haven’t been changed since the 1400s.  Secondly, the neighborhood is no longer governed by the restrictive bureaucracy of postwar Britain.  In short, Pimlico — or Burgundy, as it is now called — is a free and independent state.

Soon, the nation of Burgundy is being overrun by greedy businessmen and enthusiastic shoppers.  The British respond by surrounding Burgundy with barbed wire and announcing that no one may cross the border.  The Burgundians react by demanding that anyone riding the underground through their country have a passport or run the risk being kicked off the train.

And things only escalate from there.  The British government is desperate to put Burgundy in its place while the citizens of Burgundy are determined to maintain their independence.  If Passport to Pimlico were made today, this is probably one of those situations that would either end in tragedy or with everyone learning not to question the whims of the government.  Fortunately, Passport to Pimlico was made in 1949 and, as a result, it is a genuinely warm-hearted comedy that celebrates both individual freedom and patriotism.

And really, it’s an enjoyable little film.  The cast is full of British character actors, all of whom deliver their dialogue with just the right amount of snark.  I enjoyed it and I have to admit that I related to it a bit.  As I look at America today and I think about what it’s going to be like in 2017 (regardless of who wins the presidential election because, let’s be honest, they all suck), there’s a part of me that would love a chance to get out of this country and be a Burgundian.

Until then, I guess I can just watch Passport to Pimlico.

The 23rd film in Mill Creek’s Fabulous Forties box set was an hour-long “comedy” from 1942.  The name of the film was Freckles Comes Home and I have to admit that I’m struggling to come up with anything to say about it.  That’s the thing about these Mill Creek box sets.  Occasionally, you’ll come across a really good movie and, even more frequently, you’ll come across a really bad movie.  But often times, you find yourself watching filler.  If I had to guess, Freckles Comes Home was probably a movie that was made to act as the 2nd half of a double feature.  Not much money nor effort was put into it.  It’s not terrible and it’s certainly not good.  It’s just sort of there.

With a title like Freckles Comes Home, I was expecting this movie would be about a lost dog but it turns out that I was wrong.  Freckles (played by Johnny Downs) is a human being.  He’s returning home from college because a friend of his has inherited some real estate and isn’t sure what to do about it.  While sitting on the bus home, Freckles spends so much time talking about how much he loves his hometown that the man sitting next to him decides that maybe he’ll make that town his home as well.  Unfortunately, that man is Muggsy Dolan (Walter Sande).  As you would expect with a name like Muggsy, Dolan is a criminal on the run.

Back in town, Freckles attempts to convince his father not to build a road that will go through his friend’s property.  He also romantically pursues a childhood friend named Jane (Gale Storm), despite the fact that everyone insists that Jane can do better than Freckles.  (Personally, I was wondering why — in the year 1942 — a young man like Freckles wasn’t overseas, fighting for his country.  DON’T YOU KNOW THERE’S A WAR ON, FRECKLES!?)  Meanwhile, Muggsy is plotting to rob the town bank…

And then there’s Jeff (Mantan Moreland), who is the porter at the local hotel.  Jeff thinks that he has a machine that will allow him to find buried gold.  And since Jeff is an African-American in a 1940s film, it’s impossible to watch the way the movie treats him without cringing.  There’s a few scenes where Moreland, as an actor, subtly suggests that Jeff is smarter than the movie gives him credit for and certainly, Moreland’s performance is the most memorable in the film but that really doesn’t make the role any less demeaning.

Anyway, Freckles Comes Home was largely forgettable.  I assume that audiences in the 1940s may have enjoyed it (especially if it was included on a double bill with a more interesting movie) but, seen today, there’s just not that much to be said about it.  It exists, it’s something of a time capsule, and that’s pretty much all there is to say about it.