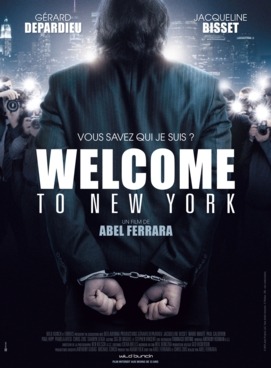 Gerard Depardieu is naked a lot in Welcome to New York and I know you’re probably being snarky and sarcastically thinking, “Well, then I’m definitely going to track down this film…” but actually, the frequent display of Depardieu’s body gets to the heart of what makes his performance so memorable.  Playing an extremely unsympathetic role, Depardieu doesn’t hide the character’s depravity from the audience.  He reveals every inch of the character, from his flabby body to his empty soul.  It takes courage to bring such an unsympathetic character to life and talent to keep the audience watching and fortunately, Depardieu has both of those.

Welcome to New York opens with Depardieu (as himself) talking to a group of reporters and explaining why he’s decided to play a character based on Dominique Strauss-Kahn in Abel Ferrara’s upcoming movie.  It’s an interesting way to start, both because it features Depardieu’s scornful opinion of politicians and because it leaves no doubt that, even if Depardieu’s character has been renamed Devereaux, Welcome to New York is directly based on the Dominique Strauss-Kahn case.

(Dominique Strauss-Kahn, of course, was the wealthy French socialist who many thought was going to be the next President of France until he was arrested after raping a hotel maid in New York City.  As a wealthy and well-connected white man, he was acquitted of raping the maid, who neither wealthy, well-connected, or white.   Throughout the trial, the usual collection of elitists complained about how Americans just didn’t understand French culture but, ultimately, Strauss-Kahn’s political career was ended by the scandal.)

I have to admit that during these first part of the film, I was often tempted to turn off Welcome To New York.  No, it wasn’t that the film was too explicit.  Instead, my problem was that Devereaux was such a dull character.  Devereaux has a lot of sex during the first third of the film but, at no point, does he seem to enjoy it.  Instead, he is detached from everything happening around him and it doesn’t exactly make for compelling viewing.

But, as the film played out, I realized that we weren’t supposed to find Devereaux in any way compelling.  Instead, Devereaux is portrayed as a hollow and empty shell.  For him, sex is all about entitlement and power.  After his is arrested for raping the hotel maid, Devereaux appears to be more surprised than anything else.  Rather than feeling regret at being caught or even fear that he might be convicted, Devereaux seems to be shocked that a man of his wealth would be held responsible for his actions.

After Devereaux is arrested, the film’s pace picks up a bit.  Devereaux’s wife, Simone (Jacqueline Bisset), flies to New York and takes over her husband’s defense.  It’s not that Simone feels that Devereaux has been wrongly accused.  In fact, Simone really doesn’t seem to care much for her husband in general.  However, Simone is determined that Devereaux is going to be the next president of France and she certainly has no intention of allowing some American criminal case to stand in his way.  Bisset gives a chilling performance as the almost fanatically driven Simone.

Welcome to New York is not always an easy film to watch but, thanks to Depardieu and Bisset’s ferocious performances, it’s a film that will reward patient viewers.

3 responses to “Playing Catch Up: Welcome to New York (dir by Abel Ferrara)”