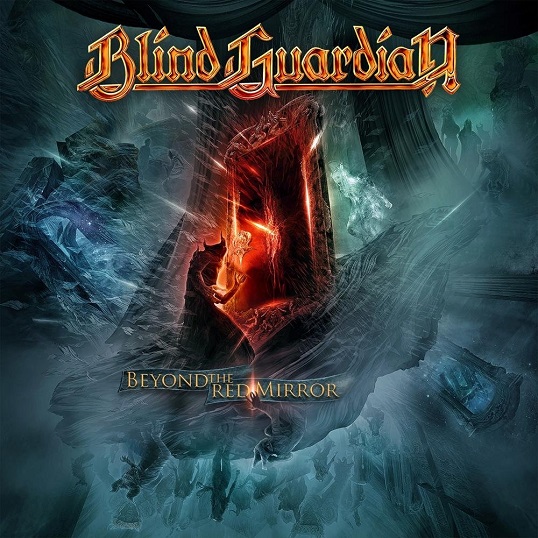 If Blind Guardian are not by now regarded with the sort of reverence generated by Metallica or Iron Maiden, it is a crime against heavy metal. Formed slightly before I was born, they might be the longest tenured band in existence that still carry extraordinarily high expectations. No one realistically expects a band to stay at the peak of their inspiration for thirty years, but Blind Guardian are the exception. They’ve never shown their age or wavered towards mediocrity. Does Beyond the Red Mirror keeps that tradition running strong?

“Yes” is the short answer. A thousand times “yes”, and only a fool would deny it. But when you’re talking about a band that released the unequivocal greatest power metal album of all time, there is still plenty of room for discussion.

Blind Guardian pulled off a pretty tough transition in 2002. They followed up Nightfall in Middle-Earth (1998), their magnum opus by nearly everyone’s measure, with a relatively significant change in style. A move like that has spelled disaster for many great bands, but when Blind Guardian traded in an edgier, crisper production for smooth and seamless symphonic beauty on A Night at the Opera (2002), it totally worked. Their next two albums continued in that direction, and I never had the slightest cause to question it. While A Twist in the Myth (2006) ranks relatively low in their discography for me, that resulted from what I felt was a bit of lackluster songwriting–not pervasive, but present enough to leave the album somewhat diminished in the shadow of its two groundbreaking predecessors. At the Edge of Time (2010) was a grand return to form, definitively proving that this band would not suffer a slow decline as the years caught up to them.

Beyond the Red Mirror opens up with a lot less steam than “Sacred Worlds” lent to At the Edge of Time. The first track, “The Ninth Wave”, kicks off with a pretty typical epic introduction, complete with a professional choir and orchestra, but it’s the sort of sound that really hinges on what will follow. We’re used to a sort of constant rise from symphonics into metal, but “The Ninth Wave” is far more brooding at the outset. “Underwhelming” might be the right word for any other band, and nothing about the lead in really grabs me, but let’s not forget what band this is. I feel pretty neutral–not negative–about the album until the first chorus kicks off. And when that point is reached–“Sail on till you reach the promised land. We all drown in the fifth dimension. The ninth wave.“–you get this big dump of pent-up anticipation that you never knew you had. The five year wait is over. Beyond the Red Mirror is here, and the chorus carries all the grandeur you knew would be coming. It feels so complete and full, so Blind Guardian to the core, that the introduction isn’t sour in retrospect. Instead, the slow motion into glory lets the album creep into you. One second you’re waiting for something to happen, the next you’re in love, and they don’t have to resort to anything jarring or sudden to create the effect.

“Prophecies”, “At the Edge of Time”, and “Grand Parade” follow this trend of paced execution, keeping you wrapped in the warm vibe that is Blind Guardian’s sound while ebbing and flowing along. Not out of place on A Night at the Opera, these four tracks suit the album’s production well and deliver without any misgivings.

“Miracle Machine” serves as the album’s only ballad, and the other five tracks… they’re pleasantly not what I expected. For all the big name orchestras involved in recording Beyond the Red Mirror, Blind Guardian actually get pretty old-school. “Ashes of Eternity”, for instance, is heavily driven by rhythm guitar, and André Olbrich’s tasty solo near the middle is cast far more in the spotlight than it might have been on previous albums. “The Holy Grail”, “Sacred Mind”, and “Twilight of the Gods” follow a similar pattern, while “The Throne” exists somewhere in between. My initial reaction to these songs was not entirely positive, but they’ve almost all grown on me over time. They make for an interesting perspective on Blind Guardian’s career. Hansi Kürsch’s gorgeous vocals still feel fairly well rooted in the A Night at the Opera sound, but Marcus Siepen and André Olbrich are bringing back a lot of the band’s more classic power metal sound. With Hansi still largely dominating the choruses and rhythm and lead guitar being more focal in between, the songs take on a novel sort of vibe that feels like quintessential Blind Guardian but does not point directly to any one previous era in the band’s illustrious history.

I definitely dig it, yet I don’t feel like Beyond the Red Mirror will leave quite the lasting impact on me that Nightfall in Middle-Earth, A Night at the Opera, and At the Edge of Time did. The problem, aside from the lack of a really stand-out ‘bard’ track–“Miracle Machine” is nice but has none of the sing-along appeal of say, “Curse My Name” or “Skalds and Shadows”–lies in the production. I can’t help but feel like Olbrich and especially Siepen are getting the short end of the stick throughout. Like the three albums before it, Beyond the Red Mirror sacrifices a lot of crispness to encompass the massive volume of vocals and orchestration. That worked really well before, but here I just don’t know. Lead and rhythm guitar alike rang with crystal clarity on Nightfall in Middle-Earth, and that was a major part of what made the album perfect. If guitar is to play a more central role again, it would be nice if I could properly hear it. My one beef with Beyond the Red Mirror is that, while the band continues to evolve in positive ways, their producer may be failing to keep up.

I think that’s a big issue. This album is awesome, but I would love it so much more if they’d filled the symphonic void with louder, crisper guitar. That goes for about half of the tracks. I just sometimes feel like a few modest tweaks would have made them better. I’m looking forward to seeing some quality live videos of these songs pop up on Youtube, because I think a live venue may do them better justice. For now, Beyond the Red Mirror earns entry into my Blind Guardian playlist with ease, but I’ll not be revisiting it quite so often as Nightfall, Night at the Opera, or Edge of Time.

If you want another song to check out, I think “Prophecies” is my favorite. “The Ninth Wave”, “Ashes of Eternity”, and “Grand Parade” come close.

5 responses to “Review: Blind Guardian – Beyond the Red Mirror”