Ever since I first saw the commercial during Whitney, I have been looking forward to seeing Beautiful & Twisted.  Not only was it true crime (which is one of my favorite Lifetime movie genres) but it also featured Rob Lowe.  Rob has appeared in a few Lifetime films and they always seem to bring out his best.

The film is narrated by Ben Novack (Rob Lowe), who starts things off by telling us that he’s dead.  We see how Ben, the eccentric son of a millionaire hotelier, first met and subsequently married a stripper named Narcy (Paz Vega).  Ben likes collecting Batman memorabilia.  Narcy likes money.  They both like kinky sex.

However, Ben is often unfaithful to Narcy and finds himself on the receiving end of her often violent tempter.  When Narcy finds out that Ben is planning on leaving his fortune to his mother (Candice Bergen), Narcy has her murdered.  And when she worries that Ben might like her daughter (played by Seychelle Gabriel) more than her, Narcy has Ben brutally murdered.  Not only does she get her brother to beat him to death but she also demands that his eyes be gouged out of his head.

Amazingly enough, this is all based on a true story.

This is one of the best Lifetime films that I’ve seen in a while!  It was stylish, it was melodramatic, it was occasionally funny, and it was over-the-top in the best way possible.  The settings were opulent, the clothes were to die for, and the pace was relentless.  Even the music was great!  Seriously, if you’re going to make a movie about kinky sex and murder among the wealthy, you should at least have fun with it.  And, despite all of the grisly murders, Beautiful & Twisted was definitely fun.

Rob Lowe was sympathetically weird as Ben while, in the role of Narcy, Paz Vega gave a performance worthy of an old school femme fatale.

All in all, Beautiful & Twisted is exactly the type of movie that we Lifetime viewers have been hoping for.

It all worked.  This one of the best Lifetime movies ever!

Well, I have to admit that I’ve never had anyone killed and I doubt that I ever will.  I’m just not the murderous type, regardless of what you may have heard.  However, much like Narcy, I’m not above using my cleavage to get what I want.

If there’s any lesson to be learned from watching any of these Lifetime true crime films, it’s that you shouldn’t murder anyone because, regardless of how cute or clever you may be, you will eventually end up getting caught.  And then someone will make a movie about you and you’ll end up with a bunch of snarky people on twitter talking about how crazy you are.  It’s better to just get a divorce. 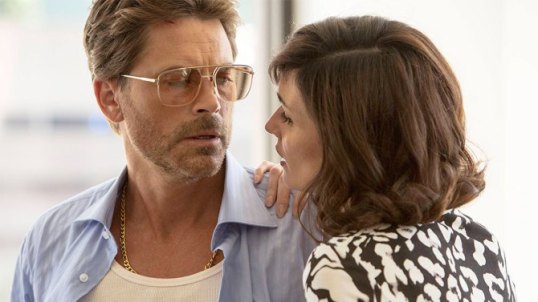