From the opening scene, Under the Skin is a dream of dark and disturbing things.

In Scotland, a silent motorcyclist (Jeremy McWilliams) finds a young woman’s dead body lying on the side of the road.  He picks up the body and puts it in the back of a van.  Inside the van, a naked woman (played by Scarlett Johansson) takes the dead woman’s clothes.  As soon becomes apparent, both the motorcyclist and the woman are not human.  They’re aliens and they’ve come to Earth on a mission that is deliberately left obscure.  Though they never speak to each other, the motorcyclist always seems to be nearby.

The woman drives the van across Scotland.  She stops men in the street and, after asking for directions, then attempts to coerce them into her van.  (What makes these scenes especially effective is that the majority of them actually feature Johansson talking to nonactors who just happened to be nearby when she drove up.)  The woman smiles and flirts and has little trouble convincing the majority of the men she meets to get into the van with her.

She drives them to an isolated building where the men follow her inside.  As they step into a pitch black room, both the woman and her latest man start to undress.  The naked man starts to walk towards the woman and is so hypnotized by the sight of her that he doesn’t even realize that the floor has become liquified and he’s sinking.  As Johansson watches coldly, each man eventually vanishes, leaving behind only his empty skin.

(Warning: The two scenes below are definitely NSFW.  Watch with caution.)

Detached from her surroundings, the woman can only watch as real human beings go about their lives.  When she sees a man unsuccessfully try to save a drowning couple on the beach, she reacts by striking the man on the head with a rock.  She drags the man away, leaving the couple’s terrified toddler on the beach.  When the motorcyclist later visits the beach, he too ignores the child.  (Perhaps no scene left me more disturbed and inspired more nightmares than this one.)

It’s only when the woman picks up a man with a severe facial disfigurement (a poignant performance from a nonactor named Adam Pearson) that she finally starts to show some emotion.  The man is as much of an outsider as she is, with the main difference being that he can’t hide who he really is under a disguise.  The woman feels sorry for him and this sudden shock of empathy causes her to reconsider her mission.

However, even as the woman attempts to flee to the Scottish highlands, the motorcyclist is never far behind.  And, unfortunately, neither are real humans…

Under the Skin is pure cinema, a collection of scenes that alternate between being naturalistic and surreal, disturbingly serious and darkly humorous.  Perhaps appropriately for a film about appearances, Under the Skin is a movie that is full of haunting images, the type that, 8 months after first being seen, remain vivid in your mind.  It’s up to the viewers to decide what those images mean.

(For all of the discussion that I’ve seen online about what Under the Skin is truly about, it seems pretty obvious to me that the main message of the film is that guys are so led by their penis that they’ll even allow themselves to sink into a liquid void if there’s a chance they might get laid beforehand.)

Under the Skin has been a player (albeit a minor one) in the precursors leading up the Oscars.  A few of the braver critical groups have nominated it for best picture and have also honored Scarlett Johansson for her wonderful work as an outsider who is both slowly discovering what it means to be human while also dealing with the reality that, try as she might, she will never truly belong in this world.  However, with all that in mind, Under the Skin is probably too divisive and unique a film to ever truly appeal to the Academy.

Under the Skin is also a film that we’ll still be discussing years from now. 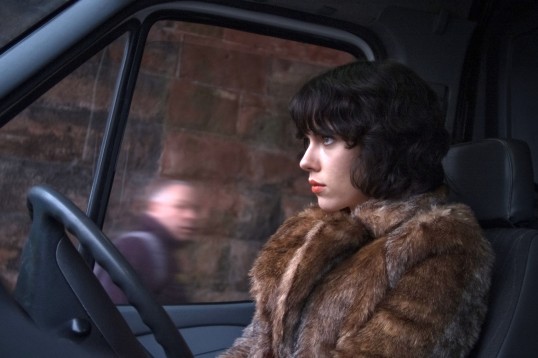 6 responses to “For Your Consideration #9: Under the Skin (dir by Jonathan Glazer)”