For the past two and a half weeks, we’ve been taking a chronological look at some of the best, worst, most memorable, and most forgettable teens films ever made.  We started with two films from 1946 and now, 43 films later, we’ve reached the end of the 80s.  And what better way to close out the decade that is often considered to be the golden age of teen films than by taking a look at two films from 1989 that both paid homage to the films that came before them and also served to influence the many films that would come after.

When people talk about Say Anything…, they usually seem to talk about the fact that it was the directorial debut of Cameron Crowe (who, it must be said, launched the golden age of teen films by writing Fast Time At Ridgemont High) and that it features what may be John Cusack’s best performance.  Famously, Cusack apparently felt that — after performances in Class, Sixteen Candles, and Better Off Dead — he was through playing teenagers.  But then he read Crowe’s script and was so impressed by it that he agreed he would play a student one last time.

It may, however, have helped that the character Cusack plays, a likable and easy-going kickboxing enthusiast named Lloyd Dobler — is only briefly seen as a student.  He graduates from high school early on in the movie.  That majority of Say Anything… deals with the summer right after high school.*  Lloyd has an unlikely but heartbreakingly real romance with Diane Court (Ione Skye), the valedictorian.

Cusack is so charming as Lloyd (and, needless to say, he gets all of the best lines) that I think people tend to overlook the fact that Ione Skye is equally as good.  Diane is actually a far more challenging role than Lloyd.  Whereas Lloyd is distinguished by his confidence and his friendly manner, Diane is neurotic, shy, and unsure of herself.  She’s won a scholarship to study in England and is scheduled to leave at the end of the summer but she’s scared of flying.  Even worse, her father, Jim Court (John Mahoney), is being investigated by the IRS.  As the summer progresses, Diane is forced to deal with the fact that not only has her seemingly perfect father broken the law but, when he’s confronted with his crimes, he uses his daughter as his excuse.  Yes, Jim seems to be saying, I stole money but I only did it to give you the best life possible.

Everyone seems to remember Say Anything… as the film that has that scene where Lloyd serenades Diane by holding that radio over his head.  And yes, that’s a wonderfully romantic scene, even if it’s been parodied so many times that it’s probably no longer as effective as it was when the film was first released.  But for me, Say Anything… is truly about Diane growing up and realizing that her father is not the saint that she thought he was.  (Making this realization especially upsetting is the fact that, initially, Mahoney is so likable in the role.)  You’re happy that Lloyd is there for her and you truly do come to love him because he is the perfect boyfriend, but ultimately, Say Anything… is Diane’s story.

(That said, though, I have to admit that some of my favorite scenes are just Lloyd talking to his friends.  Lili Taylor gives a great performance and how can you not laugh at Jeremy Piven hanging out at the convenience store?)

Ultimately, of course, the film works because both Lloyd and Diane come across as real human beings.  They’re not just boyfriend and girlfriend.  Instead, they’re two very likable characters who have been lucky enough to find each other.  In the end, you love Lloyd not because he’s funny or quirky but because he loves Diane for who she is.

Of course, it also helps that Say Anything has the perfect ending. 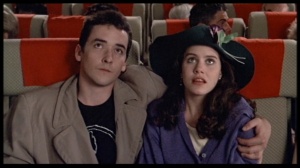 * On a personal note, the summer after I graduated high school was the best summer of my life because I spent most of it in Italy!  Viva Iatalia!