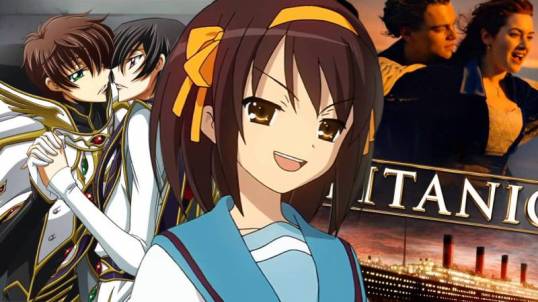 What was one of the hobbies teens of any era enjoyed doing before, during and after school?

That is a question that could have many answers and all of them would be correct. Of late, the answer of “shipping” classmates, fictional characters and everything in-between has become such a cutthroat past-time amongst teens and those teen-at-heart that on-line wars have cropped up when certain people think their “ships” is the only OTP and everything else are non-canon and thus not worthy of mention or attention.

Yeah, I could barely understand what I just said there, but being a confessed otaku I know enough of this “shipping” and “OTPing” and all the other made up words people younger than I have created to help enhance their obsessi….enjoyment of anime, films and books.

This AMV perfectly illustrates the extent people go through to make sure everyone knows their pairings of characters is the one true one. I’ve studied wars which have started like this.

Song: “I Ship It” by Not Literally


Gus Van Sant’s dream-like 2003 film Elephant is not an easy film to review.  Working with a non-professional cast and avoiding any easy answers or traditional narrative tricks (and indeed, the film ends with the fates of most of the characters still unknown), Elephant is ultimately a disturbing and nightmarish film.  It’s also an important film, one that examines the violence that runs through our current culture.

I’m one of the lucky ones.  I managed to get through all 12 years of my public education without ever getting shot at.  There’s quite a few people my age who can’t make the same claim.  I’d be lying if I said that I spent a lot of time in school obsessing over whether or not someone was going to start shooting but now, when I look back, I sometimes wonder how close I may have come.  One of the scarier things about the typical profile of school shooter is that we’ve all known somebody who fits it.  Sometimes, I can’t help but wonder if I just got lucky.  Maybe the guy who was planning on shooting up my school couldn’t get his hands on a gun.  Maybe, at the last moment, he changed his mind and decided to leave his gun in his locker instead of taking it out before the start of second period.  We come into contact with thousands of people over the course of our lives and we can never for sure what any of them are truly thinking or planning.

According to Wikipedia, there were a dozen school shootings in the U.S. during the time I was in high school.  Thankfully, none of them happened at my high school but, as I looked over the list, I couldn’t help but wonder why my classmates and I were spared the trauma of random violence while the students at Rocori High School in Cold Springs, Missouri were not.  Were we somehow better or more deserving than the students at Rocori?  Had they done something wrong or had we done something right?  Why were they forced to deal with violence while I was spared?  It all just seems so random.

And that’s the terrifying thing about random violence — it is, in the end, all so random.  We always tend to look for explanations afterward.  We try to assign blame and we try to come up with a reason because we know that, if we can explain random violence, then we can do something about it.  But, far too often, there are no reasons.

Elephant perfectly captures this randomness.  The film’s ensemble of characters spend what for many of them will be their final hours randomly wandering through their high school and their lives. Three mean girls eat lunch and then duck into toilet stalls where all three of them proceed to throw up.  John (John Robinson) searches for his drunk father (Timothy Bottoms) who may be wandering around the campus.  Awkward Michelle (Kristen Hicks) goes from her gym class to the library, little aware that she will soon be the first to be confronted by the gunmen.  Once the shooting starts, silent jock Bennie (Bennie Dixon) walks through the body-strewn halls, a potential hero until he is randomly shot.  The film is full of flash forwards and flashbacks, in which we see Alex (Alex Frost) and Eric (Eric Duelen) planning their rampage and we’re given clues as to their motives but we’re not given any answers.

Perhaps most memorable of all, at least to me, is the character of Eli (Elias McConnell), an aspiring photographer who gets one picture of Alex and Eric as they enter the library.  Up until that moment, the entire film has pretty much centered on Eli.  We’ve gotten to know him.  We’ve come to like him.  And yet, when Eli is shot, it happens almost as an afterthought.  One minute, he’s standing in the background and the next moment, he’s gone.  And we’re left to wonder if he survived or if it was even him who got shot.  Ultimately, what we realize is that, in that one split second, Eli ceased to be.  Even if he does survive being shot, he’ll never be the same person we saw earlier.  Even if he wasn’t shot, he’ll always be one of the students who went to that school.  In the end, we may have cared about Eli but none of that could stop the random violence.

Elephant is not an easy film to watch but then again, it shouldn’t be.  (If you want to read a bunch of comments from some people who just don’t get it, you can go read the simple-minded comments that some of them have posted over on the movie’s page at the imdb.) Elephant is a dark and troubling film, one that gave me nightmares after I saw it.  It’s a film so effective and powerful that one viewing is more than enough.

(Incidentally, one of Elephant‘s credited producers was JT Leroy, the pen name of Laura Albert whose books inspired a similarly difficult but powerful film, Asia Argento’s The Heart is Deceitful Above All Else.) 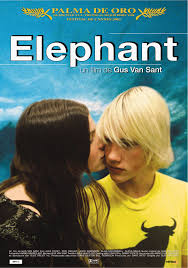