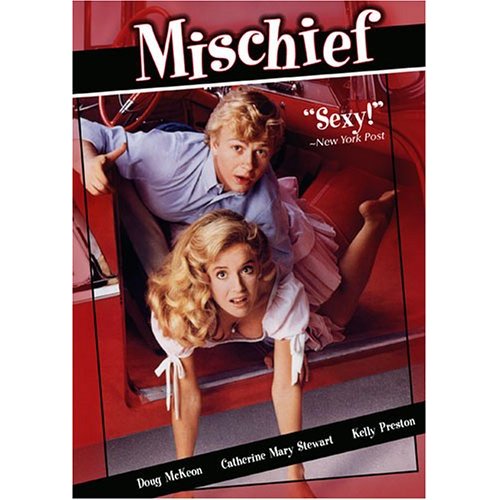 Have you ever noticed how, occasionally, a totally obscure film that was made several decades ago will suddenly show up on either Starz or Encore and, the next thing you know, it’s only like every other day?  That was the case a few months ago when, at times, it seemed as if the only thing playing on cable was a teen comedy from 1985 called Mischief.

After I saw it listed in the guide a few dozen times, I thought to myself, “Somebody at that station must really like that movie.”  So, one night, I actually took the time to watch it and discovered why that mysterious person loved this movie.  Mischief may not be as well-known as some of the other films in this series of Back to School reviews but it’s still a pretty good movie.

Like so many of the teen films that were released in the 70s and 80s, Mischief takes place in the 1950s.  (I assume that’s because most films about teenagers are made by adults who want to both relive and perhaps change the past.  I suppose that’s one reason why so many films released today are set in the 1990s.  In another ten years or so, all of the new high school films will be set in 2003.)  The very shy and clumsy Jonathan (Doug McKeon) has a crush on the beautiful but unattainable Marilyn (Kelly Preston).  Fortunately, Jonathan is befriended by Gene (Chris Nash) who is the prototypical rebel without a cause.  Gene wears a leather jacket.  Gene rides a motorcycle.  Gene doesn’t get along with his alcoholic, violin-playing father (Terry O’Quinn, in full asshole mode here).  Gene even stands up to the school bully (D.W. Brown) and starts dating the bully’s ex-girlfriend, Bunny (Catherine Mary Stewart).  Most importantly, Gene helps Jonathan finally develop the confidence necessary to ask Marilyn out.

And, for a while, Gene & Bunny and Jonathan & Marilyn make for the perfect foursome.  But, as we all know, perfection can never last in a coming-of-age story.  Jonathan starts to discover that he and Marilyn are not quite as compatible as he originally assumed that they were.  As for Gene, he has to deal with his increasingly violent and drunken father…

That last paragraph probably makes Mischief sound a lot more dramatic than it actually is.  Make no mistake about it — while Mischief does deal with some serious issues — it is primarily a comedy and a pretty good one at that.  McKeon is endearingly clumsy in his initial attempts to get Marilyn to notice him and Nash — even though he’s playing a very familiar character — is likable as well.  Perhaps the smartest thing that Mischief did is that it made Gene cool but it didn’t make him too cool.  The film’s best scenes are the ones where Gene momentarily surrenders his rebel facade and reveals that he’s just as confused as everyone else.  Catherine Mary Stewart and Kelly Preston are well-cast as well, with Preston especially doing a good job at making a potentially unsympathetic character likable.

In many ways, Mischief is a pretty predictable film.  I think it features probably every single cinematic cliché that one would expect to see in a film about the 50s.  But the film itself is so likable and good-natured that it doesn’t matter if it’s predictable.  It’s just a good, enjoyable movie and what’s wrong with that?

(Incidentally, the screenplay for Mischief was written by Noel Black, who also directed the previously reviewed Private School.) 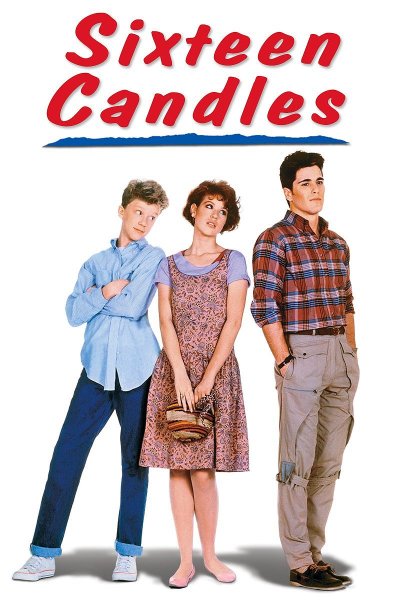 The 80s are often considered to be the golden age of teen films and that’s largely due to the work of one man, John Hughes. A  former advertising copywriter and a contributor to National Lampoon, Hughes went on to direct and write some of the most influential films of all time.  By deftly mixing comedy with themes of alienation, rebellion, and youthful disillusionment, Hughes changed the way that teenagers were portrayed onscreen and his influence is still felt today, in everything from Juno to Superbad to Easy A to … well, just about any other recent film starring Michael Cera.

(Okay, I know Michael Cera was not in Easy A but it really seems like he should have been…)

Hughes made his directorial debut in 1984 with Sixteen Candles, a comedy about love, birthdays, and weddings set in an upper class suburb of Chicago.  (I have to admit that, much like with My Tutor, one reason that I like this film is because I like seeing where everyone lives.)  As the film opens, Samantha Baker (Molly Ringwald) is not having a particularly good time.  For one thing, everyone is so wrapped up in her older sister’s wedding that they’ve forgotten about Sam’s sixteenth birthday.  Her house is full of wacky grandparents (and one foreign exchange student named Long Duk Dong).  At school, Sam is in the unenviable position of being neither popular enough nor unpopular enough to actually be noticed by anyone.  Instead, she’s just there.  She has a crush on Jake Ryan (Michael Schoeffling) but is convinced that Jake doesn’t even know that she’s alive.  (Of course, she’s wrong.)  She’s also being pursued by a character who is occasionally referred to as being “Farmer Ted” but is listed in the end credits as simply being “The Geek.”  (I’m going to refer to him as “The Geek” because Farmer Ted makes him sound like he should be killing people in a SyFy original movie.)  As played by Anthony Michael Hall, The Geek isn’t your typical high movie nerd.  Instead, he’s the outspoken and confident king of the nerds and he’s proud of it.  The Geek is madly pursuing Sam and has made a bet with his friends (including John Cusack) that he’ll not only have sex with her but he’ll prove it by bringing them her panties.  (BAD GEEK! — but fortunately, Anthony Michael Hall gives such an energetic and likable performance that you can forgive him.)

There are parts of Sixteen Candles that have not aged well.  And, by that, I’m mostly referring to the character of Long Duk Dong, who is so well-played by Gedde Watanabe that it’s tempting to ignore just how racist the portrayal of his character really is.  As well, I know that a lot of my more erudite friends would probably only briefly look away from their copy of Thomas Piketty’s Capital In The 21st Century, just long enough to pronounce that Sixteen Candles is essentially a film about “first world problems.”

Well, maybe it is.  But I don’t care.  I like it.  John Hughes’s script is full of classic lines and funny characters, Anthony Michael Hall is likable as the Geek, and, as played by Michael Schoeffling, Jake Ryan is the epitome of the perfect guy.  If your heart doesn’t melt a little when he says that he’s looking for true love, it can only be because you don’t have a heart.  And finally, Sam remains a character that we can all relate to.  As played by Molly Ringwald, she’s the perfect sullen everygirl.

Of course, an undeniable part of the charm of Sixteen Candles comes from the fact that it really is a film that could not be made today.  Sixteen Candles may take place in an entirely different world from films like The Pom Pom Girls and Suburbia, but it’s still just as much of a time capsule.

First off, there’s about a thousand apps out there that will make sure that you never forget anyone’s birthday.  If the film was made today, Sam’s parents would have checked their e-mail and found a message from Facebook telling them that “Samantha Baker has a birthday this week!”  They could have just written “Happy birthday to a wonderful daughter!” on her wall and half of Sam’s problems would have been solved.

Secondly, it’s doubtful that, if the film was made today, the Geek would be able to get away with just showing everyone’s Sam’s panties.  Instead, they would have demanded nude pics, which would have then been posted on the internet for the entire world to see.  And let’s be honest: “Can I send my friends naked pics of you?” doesn’t quite have the same ring to it as “Can I borrow your underpants for ten minutes?”

*And, no, I haven’t read Piketty’s tome.  I have a life to live and movies to see. 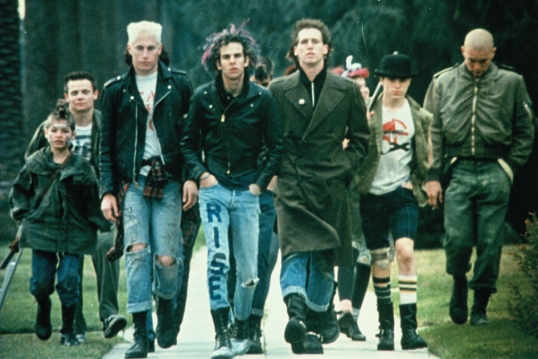 I’ve been reviewing film on this site for over four years now and one theme that I find myself returning to, time-after-time, is that I love movies that serve as time capsules.  I love movies that were made specifically to capitalize on specific trends, culture, and fashion.  Many people dismiss these films as being dated but that’s precisely why I enjoy them.  I just love seeing how the world once looked and how life was once lived.

The 1984 film Suburbia definitely falls into that category.  Produced by the legendary Roger Corman and directed by documentary filmmaker Penelope Spheeris, Suburbia tells the tale of The Rejected, a group of teenage runaways and other outcasts who, having both rejected and been rejected from conventional society, now illegally live in an abandoned house in the middle of the suburbs.  The film focuses on two runaways — Sheila (Jennifer Clay), who was abused by her father, and Evan (Bill Coyne), who is fleeing an alcoholic mother.  Both of them — along with yet another runaway named Joe Schmoe (Wade Waltson) — are invited to live in the “T.R. House” by the group’s leader, Jack Diddley (Chris Pedersen), on the condition that all three of them allow themselves to be branded with the letters “T.R.”  In short, when you’re rejected, you’re rejected for life.

Eventually, all three of them settle into life at the house.  Joe and Sheila start a tentative relationship.  Evan brings his younger brother Ethan (Andrew Pece) to the house.  They spend their days frightening their conventional, middle class neighbors and being harassed by a group who, rather ominously, refer to themselves as “Citizens Against Crime.”  When they need food, they either steal it or they rummage through other people’s garbage.  Jack’s stepfather, a cop named Bill (Donald Allen), drops by the house and tells them that they need to leave before someone tries to make them leave.  The Rejected, however, refuse to forced out.  It all leads to both violence and tragedy…

What makes Suburbia an interesting film (even for someone like me, who would probably be spit at by the residents of the T.R. House) is that Spheeris is both clearly on the side of the Rejected but, at the same time, she also makes no attempt to idealize them.  The film does not shy away from showing that the residents of the T.R. House are, for the most part, angry, violent, and self-destructive.  However, Spheeris suggests that, in a society that continually tries to co-opt and neuter all forms of rebellion, the Rejected don’t have much of a choice but to continually go to the next extreme.  She finds a humanity and a beauty in their often hopeless existence because, even if they are doomed, at least they’re going to be doomed on their own terms.

Spheeris filled the film with non-actors and local Los Angeles musicians (A very young Flea plays one of the residents of the house) and, as a result, Suburbia features some of the most wooden performances and awkward line readings that I have ever seen or heard.  But, what the cast lacks in acting ability, they make up for with the right attitude and the right look.  And you can see that in perhaps the film’s best and most iconic scene, the infamous punk parade.

And you can watch that parade below!