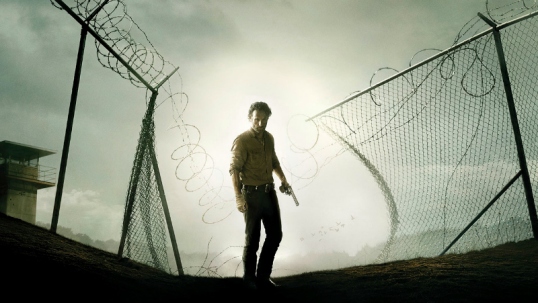 “You can’t be afraid to kill.” — Carol Peletier

This week the godfather of the zombie genre was interviewed and the question of The Walking Dead was brought up. Well, it would seem that George A. Romero turned down the offer to direct a couple of episodes of The Walking Dead. His answer was that the show was really just a soap opera with the occasional zombie. His answer hasn’t sit well with fans of the show while those who have been major critics and detractors of it feel content at hearing their argument validated. Yet, it’s those very words that probably just gave the best answer as to why The Walking Dead the show continues to get huge ratings and just gain more and more fans with each new season…with each new episode.

Yes, it is a soap opera with zombies and we all know just how ridiculously popular soap operas can be when it hits a particular button with the general public. I think the writers and producers of the show know this to be true.

“Indifference” marks the fourth episode of the new season and it focuses on that very soap opera-ish aspect of the show that Romero spoke about in his interview. Yet, as the show delves more on the character interactions and conflicts with this episode it does so minus the flaws from past attempts which led to nowhere and no growth for the characters involved. Tonight’s episode explores the theme of not just the indifference which has settled on some of the survivors but also the concept of entropy which the zombie apocalypse itself has ultimately brought to the world from it’s very onset.

We see the time spent between Carol and Rick during this episode a battle of wills between two characters who become integral part of the groups survival dynamics since season 1. Yet, we see only true growth with Carol in this season. She has come a long way from the meek, silent abused housewife from season 1 to a battle-hardened leader-type who’s willing to make the difficult decision in behalf of the group. This used to be Rick’s role in the past three season, but the burden of leadership seemed to have weighed too much on this father of two. His decision during the timeskip to stop being the group’s leader and just become a farmer looks more and more like the very indifference and entropy tonight’s episode has been exploring.

Does Carol’s actions in killing both Karen and David make her out to be villain or does it just goes to show that she’s learned not to be afraid to kill if it means saving the rest of the group. She knows that what she did many wouldn’t understand, but she also knows that Karen and David were already dead and a danger to everyone. Her decision to unilaterally kill the two might have been correct when thought through logically, but Rick doesn’t see it that way. His reaction and decision to exile Carol was Rick’s emotional and attempt to hold onto the concept of humanity for the sake of Carl and Judith. Even as he drives away he understand that his decision might be wrong, but his narrow vision on trying to protect his children from calculated and logical decisions was another form of Rick’s indifference at the world as it is now and not as he wants it to be.

There’s change coming on the show’s group dynamics and we just don’t see it between Carol and Rick, but just as important between Tyreese and the rest of the scavenging group, Bob and Daryl and between Daryl and Michonne. We see Tyreese’s continue his change from the compassionate survivor who confessed to not having the stomach to killing the zombies day in and day out. His inconsolable rage from losing Karen (to a certain extent one of his last grasps in keeping his humanity) has made him a liability as he loses focus in his rage. yet, it’s this very indifference to whether he lives or dies that could become Tyreese’s ultimate wake-up call to become a better survivor in the long-run. The same couldn’t be said for Bob who we find out has already seen two groups of survivors not make it through with him being the only survivor. Just like Rick he has retreated back from trying to make things work through the very bottle he himself confessed probably killed Zach in the season’s premiere episode.

The show has improved from season to season. Season 4 looks to be more focused than seasons past. It still has some problems with having too many characters who do nothing but act as cannon fodder and/or plot devices (example Ana and Sam just for tonight’s episode). But even with the show looking like it’s just about talking and more talking it still manages to move the story forward when in the past it led things in circles. Yes, it’s this very dialogue-heavy and interpersonal conflicts that gives the show it’s soap opera label, but this season it’s this very drama that has made it very interesting on top of entertaining.

While Romero’s decision to turn down directing episodes of the show was based on this very soap opera-ish part of the show one has to remember that zombie fiction, even Romero’s very own classic films from Night of the Living Dead, Dawn of the Dead to Day of the Dead lived off of the very soap opera-like narrative and conflicts that The Waling Dead just happens to use and mine with each new episode. I don’t think the show will ever shed this part of it’s storytelling style. It’s a major appeal to the legion of fans who love and follow the show. It’s both a pro and con for the series. The question that continues to be explored with each new episode is whether Scott M. Gimple as the series’ new showrunner will be able to sustain this pace and not lose it in the end the way Mazzara did in season 3.

So, originally, The Wolf of Wall Street was the movie that everyone was expecting to dominate the Oscar race.  Then, a few months ago, it was announced that the film might be held back until 2014 while director Martin Scorsese put the finishing touches on the film.  And then, just as suddenly, it was announced that The Wolf of Wall Street would be released this year, on Christmas Day to be exact.

And with that announcement comes a second trailer!

To be honest, neither one of the film’s trailers really feel like trailers for a Scorsese film.  Then again, that’s the same thing that many of us said about Hugo.

This trailer has been out for nearly a month now so I’m a little late in sharing it.  However, after having watched this trailer play before every single movie that I’ve seen since the month of October, I have to say that there is no film that I am more looking forward to seeing than American Hustle.

(You can check out the first trailer for American Hustle here.)