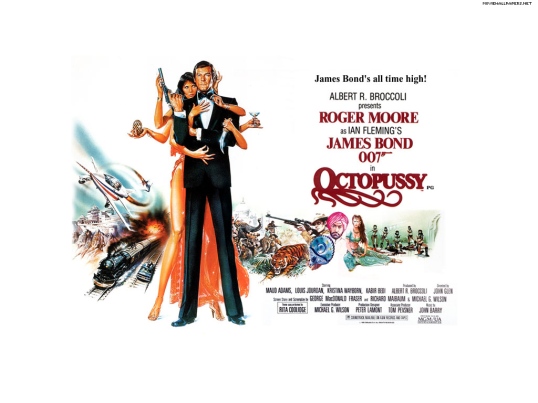 We’re at the home stretch in the Roger Moore-era of Ian Fleming’s James Bond film series. During his time in the role as Britain’s super spy extraordinaire we’ve seen him put his own personal stamp on the role. It was a daunting task seeing the role had been played by Sean Connery early in the film series and had done such a great job of making the character such a cultural icon that anyone following him would forever be compared. Moore doesn’t just hold his own, but has built such a loayl following in the role that many consider his portrayal of Agent 007 as the best in the series.

His Bond when compared to Connery’s portrayal was more the witty charmer who tried to use his wits and brains to solve problematic (usually dangerous ones) situations he finds himself in. Connery’s Bond was more the physical type whose charm belied a much darker personality streak that Moore’s portrayal could never pull off no matter how the writers tried.

The Roger Moore-era also redefined the franchise as more more about action and less and less thriller with each new film. This culminates in Moore’s most action-packed film in the role with the 13th Bond film (produced by EON) in Octopussy.

The film begins with one of the more impressive opening sequences in the series as we find Bond in the middle of an undercover mission in Cuba. This intro’s stunt work with Bond piloting a mini-plane in and around Cuban airspace to escape and, at the same time, fulfill his mission remains a highlight in the series where each new film tries to raise the bar in terms of well-choreographed and very complicated action scenes.

Octopussy sees Bond traveling to India, East and West Germany to halt the nuclear and warmongering ambitions of a Soviet general who sees his country’s nuclear disarmament talks with the West as inviting defeat for the Soviet Union. We also have the theft of priceless Russian treasures like the Faberge Eggs being used to finance this general’s plan to complicate bond’s main mission. The plot for Octopussy is a reminder of the time it was filmed in. Reagan and Thatcher had a strong control of the West and their confrontational attitudes towards the Soviet Union and it’s satellite states made people believe that the world was on the brink of war. This public sentiment affected the fiction and entertainment of the time with Cold War thrillers becoming ascendant once more.

As much as the basic outline of the film’s plot looked to be impressive on the face of it the way the story unfolded was quite a hit-and-miss affair. I put some of this on the shoulders of it’s director John Glen who seemed more interested in moving the story from one action scene to the next while paying just the minimum of lip-service to the quieter scenes that occur in-between.

This being Moore’s sixth Bond film we pretty much know how his Bond operates. So, it falls to fleshing out his rivals and enemies to help create a much more interesting film beyond the extravagant action scenes. We learn about the agendas and personalities of Bond’s rivals through too much exposition info dumps. Even the title’ character of Octopussy (played by Maud Adams) we don’t get to learn much of other than a brief personal history dialogue she has with Bond the first time we meet. Of Bond’s two enemies in the film one is the warmongering General Orlov (played by Steven Berkoff) who comes off like an over-the-top caricature with a distinct speech pattern to match. The other is the exiled Afghan prince Kamal Khan who comes off a bit more fleshed out as Octopussy’s covetous partner-in-crime. Louis Jourdan as Kamal Khan plays the role with a sense of panache and joie de vivre that at times he’s able to match Moore’s Bond in the charisma department whenever the two share the screen together.

What should interest people about Octopussy are the very action scenes I spoke about earlier. From the opening sequence in Cuba to a thrilling race against time that traverses from East Germany to West Germany to stop a nuclear weapon from detonating it’s no wonder some people consider Octopussy as a favorite. I enjoyed the film for these very sequences despite missteps in the overall execution of the plot and inconsistencies in the performances of the cast. Yet, the film had the DNA to be much better and after repeated viewings one could see that in the hands of a different filmmaker and changes in the cast this sixth Moore-era Bond film had the potential to be one of the best.

Octopussy would mark the start of the franchise’s decline in the face of much more violent and action-packed action films of the 80’s. The film tried to keep up with this rising trend in action filmmaking during the 80’s. It was able to succeed in a fashion in making the series much more action-packed (though quite bloodless in comparison to what was about to come out of Hollywood in the coming years), but in doing so the film’s storyline and characters suffered that the film doesn’t hold up the test of time unlike some of the early Connery and Moore films.

On a side note, the film did have one of my favorite Bond song’s with Rita Coolidge singing “All Time High” in the intro sequence. A song title that was quite ironic considering that the film definitely didn’t hit an all time high.