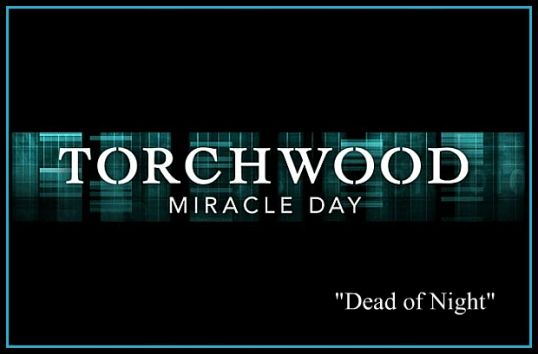 Torchwood: Miracle Day has now reached it’s third episode and we’re beginning to see a few more clues as to the truth about the so-called “Miracle Day” event which automatically made everyone on the planet Earth immortal (with the exception of the planet’s previous lone immortal Capt. Jack Harkness who became mortal instead). The series has been a bit slow about the reveals and dropping of clues and with only 10-episodes to this season it’s going to be interesting to see how Davies and his writers will tie things up when the tenth episode rolls around.

“Dead of Night” is the name of this latest episode and it’s actually quite an apropo title. The episode happens mostly at night and it’s during the darkness of night that we get a glimpse at some of the darker sides of some of the characters on the show. First, we see the team on the run after the bungled attempt by CIA deputy director Friedkin (Wayne Knight) to apprehend Matheson and the remaining Torchwood team at Dulles International. It’s interesting to notice how Rex and his fellow agent in Esther Drummond seemed out of sorts realizing that they’ve been betrayed by the very agency they work for (and maybe the very country they serve loyally) while both Jack and Gwen seem to take it all in stride as if they’ve been there and done that. Some have mentioned that the show doesn’t seem to be classic Torchwood and I can see where they’re coming from. The additions of the American characters to the team and the transplanting to US soil has created a different tone to the show which seem to be harder for the veteran fans to accept at the moment.

It’s definitely not the writing or the acting which has given this show an almost dual nature and feel. Tonight’s episode was written by Jane Espenson (who helped write the excellent sixth episode of Game of Thrones, “A Golden Crown”) and the flow of the show seemed to have improved for the previous one. Most of the set-up’s been completed and now the team is up and running once again with a new problem to solve. It’s that very problem which drives this episode as Jack and his new team begin to uncover one of the major clues that goes a long way into explaining the true nature of “Miracle Day”. I do think that finding out a major pharmaceutical conglomerate might have had a hand or knew in advance about “Miracle Day” wasn’t too much of a surprise. The way the episode paints PhiCorp and their plans for their wonder drug seems like the bad dream for everyone trying to overhaul the nation’s health care system for the better.

The show further explores Capt. Jack Harkness’ current situation as he begins to accept the fact that he’s finally dying (aging being the correct term people would use, but not for one so used to being immortal) and he doesn’t do as well as some would want him to. His emotional and drunken late-night call to Gwen after a one-night’s dalliance with a stranger picked up at a club brings back some emotional baggage and the sexual tension between the two. There’s an almost air of desperation in John Barrowman’s performance in this scene which should show new fans to the show that the series won’t be all about action and intrigue. There’s a reason the series has cultivated such a rabid fanbase and it’s been the performance by the actors, first and foremost. Eve Myles performance as Gwen on the receiving end of Harkness’ call were at times empathic, sad and frustrated as if she thought this was something the two were past but now have been brought back to the surface.

The other major performance of the night belongs to Bill Pullman’s pedophile murderer, Oswald Danes. His character still continues to be the show’s cipher. We’re still not sure what to think of Danes. He’s being made out to be a sympathetic character in one moment then a devious manipulator trying to find whatever advantage he could get his hands on to keep himself safe. We finally do get an idea who Danes is during a confrontation between him and Harkness and it spoke volumes at just how banal evil really is and it’s current face happens to be Bill Pullman’s. It’s going to be interesting to see how Danes, PhiCorp and “Miracle Day” will tie together once this season gets deeper into it’s main story.

“Dead of Night” was better than the last episode but still shows some growing pains as the writers are still coping with some of the major changes to the show’s usual tone. While some long-time fans of the show seem to not be as accepting of these changes I think it’s these changes that show’s growth in the series and such things do take time to find their footing. I expect more growing pains in the coming episodes, but I do think that this episode goes a long way into  establishing the melding of old Torchwood with the new Torchwood.