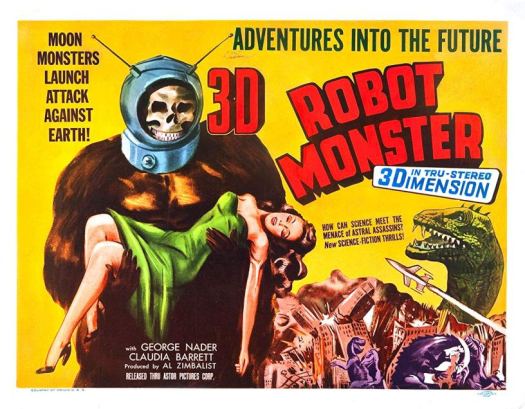 My friends at The Film Detective are hosting a Drive-In Monster Movie Party all this month, and asked me to join in on the fun! When I received the list of movies they’re showing, I jumped at the chance to watch and review ROBOT MONSTER, that infamous no-budget classic directed by Phil Tucker, featuring an alien called Ro-Man who looks like a gorilla wearing a diving helmet. And honestly, how can you not love that!!

ROBOT MONSTER consistently makes critics’ all-time worst movie lists, derided for its technical ineptitude, overwrought acting, absurd dialog, and flat-out senselessness. It’s all that, to be certain, but I look at things through a different (some would say “shattered”) lens. First, did I enjoy it? The answer: a resounding yes! The movie may not be on a par with CASABLANCA or THE SEARCHERS , but it didn’t bore me or make me want to shut…

Last week, I did an overview of producer Irwin Allen’s first two sci-fi shows, VOYAGE TO THE BOTTOM OF THE SEA and LOST IN SPACE. Today, Allen’s final shows in the quartet, THE TIME TUNNEL and LAND OF THE GIANTS!

Where Allen’s LOST IN SPACE was juvenile fantasy, his next series THE TIME TUNNEL (ABC, 1966-67) took a more serious tone. Scientists Dr. Doug Phillips (Robert Colbert ) and Dr. Tony Newman (James Darren), working on the top-secret government Project Tic-Toc, become “lost in the swirling maze of past and future ages… (and) tumble helplessly toward a new fantastic adventure, somewhere along the infinite corridors of time” (at least according to the opening narration!). Project director Lt. Gen. Kirk (Whit Bissell ), ‘electrobiologist’ Dr. Ann McGregor (Lee Meriwether), and electronic genius Dr. Raymond Swain (John Zaremba) track the pair through those “infinite corridors” and try to assist in navigating them…

Irwin Allen  (1916-1991) wore many different hats during his long career: magazine editor, gossip columnist, documentarian, producer, director. He helped usher in the Age of the Disaster Movie with such 70’s hits as THE POSEIDON ADVENTURE and THE TOWERING INFERNO, but before that he was best known as the producer of a quartet of sci-fi series from the Swingin’ 60’s. From 1964 to 1970 he had at least one sci-fi show airing in prime time… during the 1966-67 season, he had three, all complete with cheezy-looking monsters, campy humor, stock footage, guest stars (some on their way up… some down!), special effects by Oscar winner L.B. Abbott, and music by John Williams (who later scored a little thing called STAR WARS )! Here’s a look at the Amazing Sci-Fi Worlds of Irwin Allen:

Are you ready for some Danish horror? Well, don’t get too excited; REPTILICUS is a giant monster flick that doesn’t really deliver the goods. The monster itself is on a par with THE GIANT CLAW , the film’s stuffed with stock footage and needless padding, the acting and dialog are way below average. Yet I’ve always liked this loopy movie; it has an endearing charm of its own, and is entertaining in spite of its limitations.

“High above the Arctic Circle”, copper miner drilling into the Earth’s crust hit flesh and bone. Scientists are called in, and sample’s are sent to the Copenhagen Aquarium. A piece of tail is kept in a refrigeration unit, until a sleepy scientist forgets to lock the door tight. The tail begins to rapidly regenerate, and turns into a giant prehistoric lizard dubbed Reptilicus. The giant lizard gets loose and begins to wreak the usual giant lizard…

Last year’s “Halloween Havoc” took a bug-eyed look at THE FLY , so this year we’ll buzz in on it’s sequel. RETURN OF THE FLY was done on a much lower budget and trades in the original’s Technicolor for black and white, but it’s got a lot going for it. A creepy atmosphere and a strong performance from Vincent Price help lift the movie above it’s admittedly ‘B’ status, and while not wholly successful, it is fun for “Bug-Eyed Monster” fans. 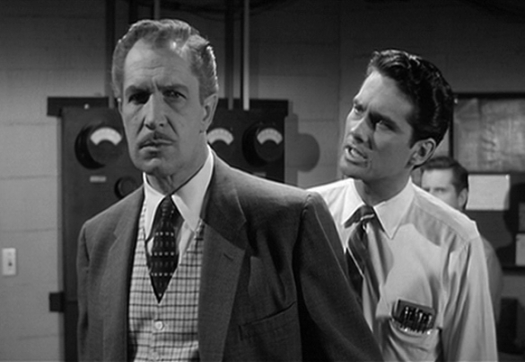 The film opens at the rain-soaked graveyard burial of Helene Delambre, widow of Andre and mother to young Philippe, who’s now all grown up. Uncle Francois (Price) finally relates the truth about Andre’s mad experiments with matter disintegration/reintegration to Philippe, and the brooding youngster now wants to resume his father’s work and vindicate his legacy. Together with his fellow scientist Alan Hines, Philippe begins to reassemble his father’s machinery, moving… 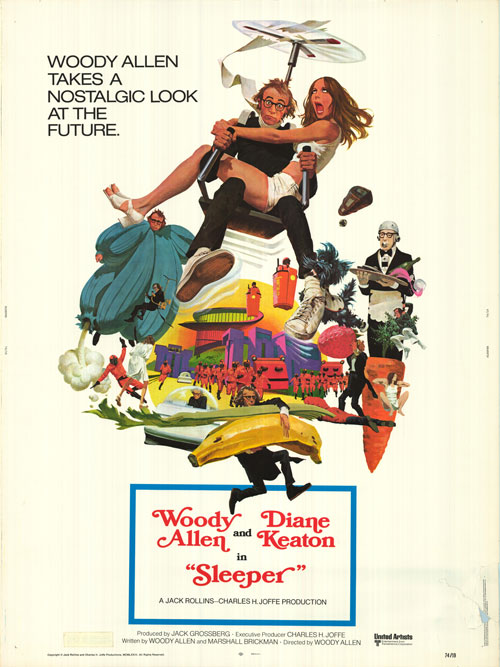 (I’m posting a bit earlier than usual so I can head up to the Mecca of baseball, Fenway Park! Go Red Sox!!)

Full disclosure: I lost interest in Woody Allen around the time he decided to become a “serious” filmmaker beginning with INTERIORS. Sure, I thought ZELIG and PURPLE ROSE OF CAIRO were funny, and A MIDSUMMER’S NIGHTS SEX COMEDY had its moments. But for me, the years 1969-1977 were Woody’s most creative period, spanning from the absurd TAKE THE MONEY AND RUN to the Oscar-winning ANNIE HALL. Landing right about midway in that timeline stands his brilliant sci-fi satire SLEEPER, which owes more to Chaplin and Keaton than Asimov and Arthur C. Clarke. 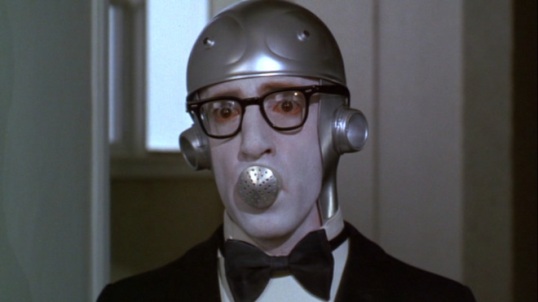 The fun begins when Miles Monroe (Allen) is woken from his cryogenic sleep in the year 2173. Two hundred years earlier, Miles had been the proprietor of the Happy Carrot Health Food store, and went in for minor surgery on…

We all love a good cheese-fest every now and then, right? Well, THE GREEN SLIME delivers the limburger by the rocket-load, with its rock bottom special effects, silly looking monsters, overwrought dialog, and a cool heavy-metalish theme song (Who was that singer belting out the tune? More on that later!). This MGM/Toei Studios mashup was made with a Japanese crew and American cast, with an Italian pedigree, no less.

An asteroid codenamed ‘Flora’ is hurtling toward a collision course with Earth, and Comm. Jack Rankin is sent to space station Gamma-3 with orders to blow the thing to smithereens. Gamma-3’s Commander, Vince Elliott, holds a longtime grudge against Rankin, and his fiancé Dr. Lisa Benson just happens to be Rankin’s ex. I smell a love triangle brewing! Rankin, Elliott, and other crew members blast off to the asteroid to plant explosives, but there’s this Blob-like, pulsating ooze around gripping their…

It had to happen sooner or later so, with the new ROGUE ONE: A STAR WARS STORY being released tomorrow, I figure now is a good time to take a look at one of the biggest films of the 1970’s, STAR WARS (retitled A NEW HOPE for you revisionists, but to me it’s still just STAR WARS). I’m pretty sure everyone reading this post is familiar with the story, so rather than rehash the plot, I’m just going to dive right into some points of interest for classic film fans.

First off, the movie was originally imagined as a loving homage to serials like FLASH GORDON and BUCK ROGERS. Writer/director George Lucas originally intended to remake FLASH, but couldn’t obtain the rights, so he created his own space opera universe, cobbling bits and pieces from Edgar Rice Burroughs, Joseph Campbell, The Bible, and other sources, including the movies he grew up with and admired…

I don’t know about you but I would never expect to see body modification, body horror, or genetic experimentation in a ninja themed manga.  It’s all in Masahi Kishimoto’s Naruto.

Disclaimer: THE CONTENT BELOW IS FILLED WITH SPOILERS! PROCEED AT YOUR OWN PERIL!

Madara Uchiha implanted his rival, Hashirama Senju’s DNA into his body and gained his botanical manipulation ninjutsu.  A strange growth that resembled Hashirama appeared on his chest as a result.

Obito, descendant of the legendary Uchiha clan, was grievously injured in combat and would have perished without Madara’s intervention.  Madara replaced damaged limbs with White Zetsu parts (a White Zetsu is essentially an artificial plant being derived from Hashirama Senju and possessing botanical manipulation and shape shifting abilities).  Obito could sprout thorns and grow trees from his Zetsu parts. 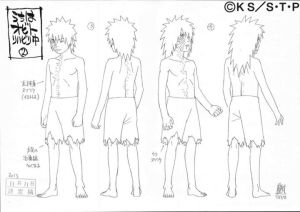 Nagato, a descendant of the Uzumaki clan and recipient of Madara’s Rinnegans (a Rinnegan is an ocular mutation possessed by the creator of ninjutsu, the Sage of the Six Path). He was able to manifest black rods on his back which enabled him to animate cadavers, replicate the Rinnegan within them, and utilize the Sage ninjutsu through them.  He is able to “operate” 6 proxies remotely, see through their eyes, and coordinate attacks. 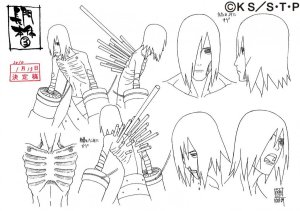 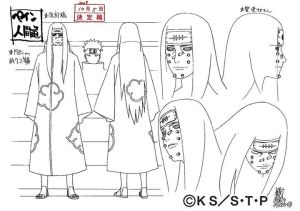 Kabuto, the medical ninja and faithful apprentice of Orochimaru, build upon the genetic research of his master & experimented on himself. He integrated his master’s true form (Orochimaru’s true form is serpentine and composed of a mass of white snakes as a result of his experimentation) into himself and the genetic material of Orochimaru’s elite minions.  Kabuto’s skin became scaly and white, his eyes became serpentine and he gained a body similar to a naga (with a chimera tail). When he entered Sage Mode, he regained humanoid legs, grew horns, and the “chimera tail” moved to his belly button.  His “tail” could replicate the forms of the genetic donors & manifest their unique abilities. 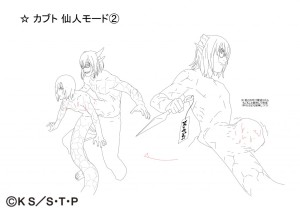 Shin Uchiha is a former test subject and experiment of Orochimaru. His unique body accepted all transplanted organs and genetic material.  He was cloned in order to discover the secret of his unique physiology.  He possesses a transplanted Sharingan eye in his right eye socket (a Sharingan is an ocular mutation unique to the Uchiha clan and consumes a massive amount of energy when transplanted in and used by non-Uchiha).  He has numerous Sharingans all over his body.  He can teleport with his fully evolved eye and control objects he marked telekinetically. He can see through a proxy Sharingan creature and utilize the teleportation ability.

It’s still just a little over 3 months before we get the premiere of Guillermo Del Toro’s return to the big-screen. It’s hard to believe that it’s almost 5 years since he last made a film (Hellboy 2: The Golden Army). His time wandering the world of Middle-Earth for three years and the last two developing his upcoming film and we now just have 3 months to wait for what could either be one of the biggest films of 2013 or a colossal failure.

Pacific Rim looks to introduce the well-worn and popular concept of the giant robot vs. kaiju from Japan to the rest of the world. Fans of this very Japanese pop-culture phenomena have been excited over this film since it was first brought up by Del Toro a couple years ago and more since then. Some have nitpicked that the trailers and teasers have made the film look like an offspring of the Michael Bay Transformers series, but then again all we’ve seen so far have been the robots. There’s still the surprise of how the kaiju will end up looking.

One thing I’ve learned about Guillermo Del Toro’s films have been that whether one likes them or not they’re never lazy affairs. He gives everything to the project and makes sure that his overall vision never get compromised by studio interference (one reason why he seems to back out of doing his dream project At the Mountain of Madness).

So, below are some of the latest promotional posters that show the five giant robots from five Pacific Rim nations who have volunteered to help fight the kaiju. 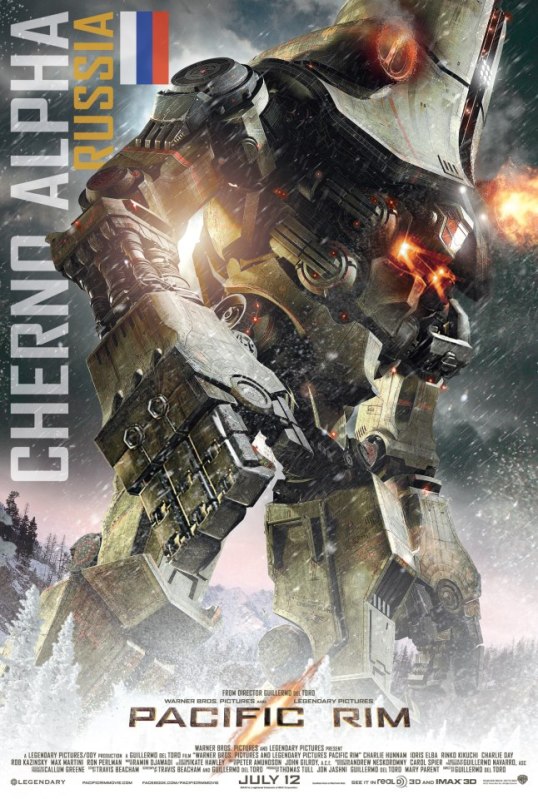 Gipsy Danger from the USA