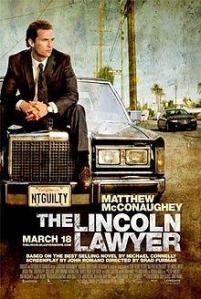 When I’m not writing about movies or reality television, I work for a lawyer.  Some people would describe me as being a receptionist but personally, I prefer the term office administrator.  (Actually, what I’d really prefer would be to have people refer to me as “Dr. Bowman,” but that’s in the future.)  As a result of my job, I’ve become jaded as far as “legal thrillers” are concerned.  The fact of the matter is that most lawyers aren’t slick, most trials aren’t exciting, and most surprise witnesses will probably have their testimony ruled inadmissable.  (Assuming, of course, that the testimony is allowed in the first place.  It won’t be.)  Add to that, attorney-client privilege is always presented as being some sort of grave and somber power like the one ring to unite them all.*

All of the usual legal thriller elements show up in Brad Furman’s new film, The Lincoln Lawyer.  Slick attorneys, melodramatic courtroom theatrics, and a lot of discussion about attorney-client privilege, The Lincoln Lawyer has them all but, fortunately, director Furman presents these cliches with so much energy and such a fine attention to detail that you don’t really mind the fact that you’ve seen this movie a hundred times in the past.

In the Lincoln Lawyer, Matthew McConaughey plays a lawyer who operates from the backseat of his car and who finds himself hired to defend a spoiled rich kid (Ryan Phillippe) who has been accused of raping a prostitute.  After McConaughey takes the case, it quickly becomes apparent to both him and his lead investigator (a nicely eccentric turn from William H. Macy) that not only is Phillippe guilty but he’s a serial murderer as well.  Phillippe, however, quickly reveals that he doesn’t care if McConaughey knows that he’s guilty.  After all, since McConaughey is Phillippe’s lawyer now, McConaughey can’t go to the police.

Ryan Phillippe makes for an imposing villain and Margarita Leviera (she played Lisa P. in Adventureland) also gives a sympathetic performance as his latest victim.  However, the film is really a showcase for Matthew McConaughey who is at his full McConaugheyness here.  Not only do you believe him as the type of lawyer who would operate out of the backseat of a car but you also totally buy it when he has to deliver potentially awkward lines like, “I’m trying to set things right!”  This is probably his best performance to date, one in which all the bad acting habits of the past are totally appropriate for the character.  If nothing else, The Lincoln Lawyer is worth seeing if just for Matthew McConaughey.

*Seriously, if you call up your lawyer and tell him that you’re planning on trying to blow up California in three weeks, attorney-client privilege isn’t going to protect you.  So, don’t do it.


We already have the first full trailer for the upcoming Thor film this coming summer season. Fans have been eagerly awaiting the next big trailer from Paramount Pictures and Marvel Studios. While a teaser trailer was shown during the Super Bowl there still hasn’t been an official trailer for Joe Johnston’s Captain America: The First Avenger. Now that wait is over as Paramount Pictures have finally unleashed the first official trailer.

Captain America: The First Avenger is still set for a July 22, 2010 release.


I was at work this afternoon when my boss — who had just gotten to the office after spending the day in court — approached my desk and said, “Lisa, you like old movies, don’t you?”

“Kinda sorta,” I replied and I tried to say that with just a hint of a coy little smile to let him know that I absolutely love movies — new and old — but I’m not sure if he noticed.

“Did you know Elizabeth Taylor died today?” he asked.  I guess I didn’t answer quickly enough because he then added, “She was a movie star, might have been a little bit before your time.”

Well, just for the record, I do know who Elizabeth Taylor was.  And even though she pretty much retired from acting before I was even born, she was hardly before my time because — whether it was by appearing in classic films like A Place in the Sun and Giant or films like Cleopatra and Reflections in a Golden Eye that were so bad that they somehow became good — she became one of those timeless icons.

I think there’s probably a tendency to be dismissive of Elizabeth Taylor as an actress because her private life, in so many ways, seemed to epitomize every cliché of old school Hollywood scandal and glamorous excess.  However, you only have to watch her films from the 50s to see that Elizabeth Taylor actually was a very talented actress who, even more importantly, had the type of charisma that could dominate the screen.

I think that’s why it was so strange to hear that Elizabeth Taylor had died.  It was a reminder that, as opposed to just being an image stored on DVDs that can be viewed as often or as little as one might choose, she was actually a human being just like the rest of us.