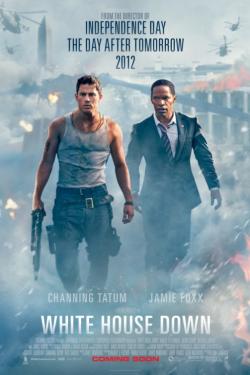 To say that the 2012 film White House Down is stupid is probably unnecessary.  After all, the film was directed by Roland Emmerich and Emmerich specializes in making stupid films.

And, in many ways, White House Down is prototypical Emmerich film, a long and self-important collection of mayhem and heavy-handed pontification.  In the case of this film, liberal President Sawyer (Jamie Foxx) is pushing for a treaty that will magically bring about world police.  Naturally, a bunch of evil right-wingers (including characters played, somewhat inevitably, by James Woods and Richard Jenkins) don’t want world peace so they hire a bunch of mercenaries who attack the White House.  It’s all a part of a plot to force Sawyer to launch a nuclear attack on Iran because … well, why not?  Fortunately, aspiring secret service agent (and kick-ass combat veteran) John Cale (Channing Tatum) is there to work with the President and save the country.

And, since Emmerich is from the bigger is always better school of filmmaking, many familiar landmarks are blown up and it takes the film well over two hours to tell its simplistic story.  To be honest, if your action movie can’t get the job done in under two hours, then you’re going to have problems.  Once a viewer has spent two hours watching one movie, it’s inevitable that he or she will start to question the film’s logic.  If the film’s clever enough, all lapses and inconsistencies can be forgiving.  If the film is White House Down, it’s a lot less easy to be forgiving.

Of course, from a political point of view, Emmerich tries to have it both ways.  For anti-government types like me, it’s always fun to watch Washington D.C. blow up.  For those on the right, White House Down presents a situation that can only be solved by heroes with guns.  And, of course, Democrats can view White House Down as wish fulfillment, an alternative timeline where Barack Obama actually is as sincere and effective as they wish him to be.

In fact, if anything saves White House Down, it’s the chemistry between Foxx and Tatum.  Wisely, neither one of them appears to be taking the film that seriously and both of them seem to be having a lot of fun blowing things up.  Channing Tatum, in particular, deserves some sort of award.  How many bad films have been made tolerable by Tatum’s willingness to laugh at himself?  I’ve lost count but White House Down definitely benefits from his presence.  He and Foxx make Emmerich’s style of filmmaking as tolerable as it will ever be.

As always, you can vote for up to 4 films and write-ins are allowed.

I know that most people will probably be voting for either Man of Steel or World War Z but for me, June is all about The Bling Ring and This Is The End.

White House Down was directed by one of my least favorite directors, Roland Emmerich.  However, there’s also a chance that Channing Tatum might take his shirt off at some point during this film so I’ll probably end up seeing it.

Personally, I just hope the film starts with Derek Jacobi desperately jumping out of a cab and running into a theater so he can challenge everything we’ve ever believed about national security.