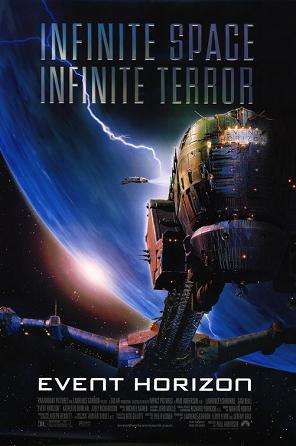 Event Horizon, a sci-fi/horror hybrid from 1997, is one of those films that starts out with a series of title cards:

Yay!  Only 16 more years to wait until we’re finally on Mars!

“2040 Deep space research vessel ‘Event Horizon’ launched to explore boundaries of Solar System. She disappears without trace beyond the eighth planet, Neptune. It is the worst space disaster on record.”

Wow, that sucks.  But things happen…

Alright, let’s get this story going!

Seven years after it disappeared, the Event Horizon suddenly sends out a distress signal.  It turns out that it didn’t blow up like everyone assumed.  Instead, it’s still out in space.  The surly crew of the Lewis & Clark is called off of leave and sent on a rescue mission.  (And when I say surly, I do mean sur-ly!  Seriously, nobody on the Lewis & Clark is in a good mood … ever!)  Accompanying the crew is Dr. Weir (Sam Neill), the scientist who designed the Event Horizon.  Captain Miller (Laurence Fishburne) may not be happy about having Dr. Weir on his ship but, then again, Captain Miller always seems to be annoyed about something.

Soon, the crew members are having hallucinations.  The ship’s doctor (Kathleen Quinlan) sees her son running through the ship.  Captain Miller sees the burning corpse of a friend that he had to abandon during a previous mission.  Another crewman appears to be possessed and attempts to commit suicide by opening up the airlock.  Dr. Weir has visions of his dead wife.  Things get darker and darker.  People die.  Eyes are ripped out of sockets.  A video of the original crew is found and it’s like something out of a painting by Hieronymus Bosch.  Miller wants to blow up the Event Horizon.  Dr. Weir replies, “We are home!”

Seriously, Event Horizon is a curious film.  I’ve seen it a few times and I have to admit that it’s never quite as good as I remembered.  If you want to get really technical about it, Event Horizon is a poorly paced film that is overly derivative of the Alien franchise and it features perhaps the worst performance of Laurence Fishburne’s career.

(Yes, even worse than his performance in Contagion…)

But, at the same time, even if I’m always somewhat disappointed with the film, Event Horizon is also a movie that stays with you.  Whatever flaws the film may have, it is genuinely scary and disturbing.  Director Paul W.S. Anderson does a good job of turning that spaceship into the ultimate floating haunted house and, even more importantly, he keeps you off-balance.  This is one of the few horror films where literally anyone can die, regardless of whether they’re top-billed or have an Oscar nomination to their name.  Whatever the evil is that has possessed the Event Horizon, it is ruthlessly and sadistically efficient.

Plus, there’s that video.  If you’ve seen the movie, you know what I’m talking about.  Anderson has complained that the studio made him cut a lot of footage out of the video but what remains is disturbing enough.  Seriously, you’ll never want to hear another Latin phrase after watching Event Horizon.