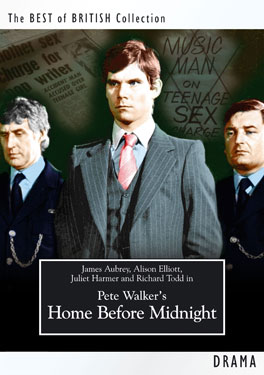 If there’s any director who deserves to be rediscovered and be given a critical reevaluation, it’s … well, I was going to say that it’s Pete Walker but honestly, I’ve only seen a handful of Walker’s films.  And really, my admiration of Walker as a filmmaker is largely due to one film, 1974’s Frightmare.  So, I’ll just say that, based on Frightmare, Walker might deserve a critical reevaluation.

It’s going to be a quick look because there’s really not that much to say about Home Before Midnight.  The film opens with two 14 year-old girls hitchhiking.  Carol (Debbie Linden) is blonde and wild.  Ginny (Alison Elliott) is brunette and responsible.  They end up getting picked up by a truck driver who quickly decides that he’d rather just give a ride to Carol.  So, Carol and the driver drive off together and Ginny ends up alone and, once again, hitchhiking.  Eventually, Ginny is picked up by Mike (James Aubrey), a songwriter in his 30s.

Not realizing that Ginny is only 14 years old, Mike takes her back to his flat and they have sex.  Afterward, Mike discovers just how young Ginny is and tells her that they can be friends but that they can’t have sex because it’s illegal.  Ginny agrees.

And then Mike and Ginny end up having sex again anyway…

Anyway, as you can probably guess, things don’t go well as far as Mike and Ginny’s “romance” is concerned.  Though Ginny swears to her parents that she and Mike are just friends, her parents see Mike being interview on television, along with an unlikely rock star named Nick (Chris Jagger, far less charismatic brother of Mick).  When Mike is asked if he has a girlfriend, Nick announces that not only does Mike have a girl but her name is Ginny.  Soon, Ginny is moving on to boys her own age and Mike is on trial.

As someone whose first “serious” boyfriend was 9 years older than her and who has always appreciated a certain maturity in men, there were a few bits of Home Before Midnight to which I could relate.  Occasionally, the first part of the film even captures the excitement of having a secret and forbidden love.

But ultimately, the film just fails.  To put it lightly, Home Before Midnight is no An Education.  Instead, it’s a painfully boring film, one that pretends to examine a serious issue but then doesn’t even play fair.  We’re told that Ginny is 14 but the actress playing her was 20 and looked and acted like she was close to 30.  As well, about 90 minutes into the film, Ginny’s personality is totally changed, the better to portray Mike as somehow being a victim.  The film makes so many excuses for Mike and the camera spends so much time lingering on Ginny’s frequent naked body (and remember, Ginny is being played by a 20 year-old but is only supposed to be 14) that it actually becomes creepy to watch.

Ultimately, the most interesting thing about Home Before Midnight is the fact that it features Mick Jagger’s younger brother, Chris, in a supporting role.  Chris Jagger looks close enough to Mick that you would guess that they were related.  But Chris has absolutely none of Mick’s charisma and it’s actually funny to hear Chris continually being described as being one of the biggest stars in the world.  Chris Jagger makes Justin Bieber look like Adam Levine.

If you still want to see this boring and creepy movie, it’s currently available on Netflix.  However, I would suggest that your time would be better spent watching any other Pete Walker film.