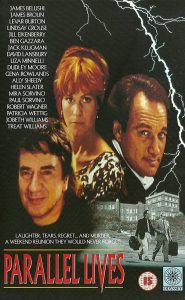 A large group of people gather together one weekend for a fraternity/sorority reunion.  Since college, some of them have become rich and powerful.  Some of them are now famous.  Some of them are now seedy and disreputable.  They all have college memories, though there’s such a wide variety of age groups represented that it’s hard to believe that any of them actually went to college together.  After the men spend the day playing practical jokes and touch football and the women spend the night talking about their hopes and dreams, they wake up the next morning to discover the someone has murdered Treat Williams.  A pony-tailed sheriff (Robert Wagner) shows up to question everyone.

Parallel Lives was made for Showtime with the help of the Sundance Institute.  Today, it’s a forgotten film but, for some reason, it was very popular with American Airlines during the summer of 1997.  That summer, when I flew to the UK, Parallel Lives was one of the movies that we were shown.  (It was the second feature.  The first feature was Down Periscope, a submarine comedy starring Kelsey Grammar.  Fourteen year-old me enjoyed Down Periscope but, in retrospect, it wasn’t much of a flight.)  A month and a half later, when I flew back to the U.S., Parallel Lives was again one of the films shown on the flight!  For that reason, I may be the only person on the planet who has not forgotten that a film called Parallel Lives exists.

Parallel Lives, I later learned, was an entirely improvised film.  The huge cast were all given their characters and a brief outline of the film’s story and they were then allowed to come up with their own dialogue.  Unfortunately, no one did a very good job of it and the men were reduced to bro-ing it up while the women spent most of the movie having extended group therapy.  The story doesn’t add up too much and, even when I rewatched it from an adult’s perspective, I wasn’t sure what I was supposed to get out of everyone talking about how different the real world was from college.  Technically, the film’s a murder mystery but you can’t improvise a successful murder mystery.  This film proves that point.

Of course, it doesn’t help that there are 26 characters, all trying to get a word in at the same time.  Some of the roles don’t make much sense.  Dudley Moore shows up, playing an imaginary friend.  (How do you improvise being a figment of someone’s imagination?)  James Brolin introduces himself to everyone as being, “Professor Doctor Spencer Jones” and that appears to be as far as he got with his improv.  Ben Gazzara is a gambler and Mira Sorvino is the prostitute that he brings to the reunion while Mira’s father, Paul Sorvino, moons the camera several times.  Jack Klugman is a senator with Alzheimer’s and Patricia Wettig is his daughter.  The majority of the movie centers around Jim Belushi, playing a reporter and falling in love with JoBeth Williams.  Liza Minnelli, Helen Slater, Levar Burton, Lindsay Crouse, Matthew Perry, Ally Sheedy, and Gena Rowlands all have small roles.  How did so many talented people come together to make such a forgettable movie and why did American Airlines decide it was the movie to show people on their way to another country?  That’s the true mystery of Parallel Lives.