Yes, this video was directed by Eric Idle of Monty Python fame.  Idle appears in the video, as does Neil Innes.  (Innes plays several roles, including the woman pushing the carriage at the start of the video.)  This video was shot on the grounds of Harrison’s estate, Friar Park (which was also known as, you guessed it, Crackerbox Palace).  The video made its debut on the November 20th, 1976 episode of Saturday Night Live.  SNL, that week, was hosted by Paul Simon and featured both Simon and Harrison as the musical guests.

The name Crackerbox Palace was originally used as the name for the Los Angeles estate that was owned by Lord Buckley, a comedian who was admired by Harrison and whom it was felt that Harrison physically resembled.  Harrison wrote the song after meeting Lord Buckley’s former manager, George Grief.  Harrison also payed homage to Blazing Saddles in the song, repeating Madeline Khan’s famous line of “It’s twoo, it’s twoo” during the instrumental breaks.

This whimsical video reflects Harrison’s sense of humor (not to mention Idle’s).  Harrison, with his reputation for being the spiritual Beatle, never seems to get enough attention for his sense of humor. 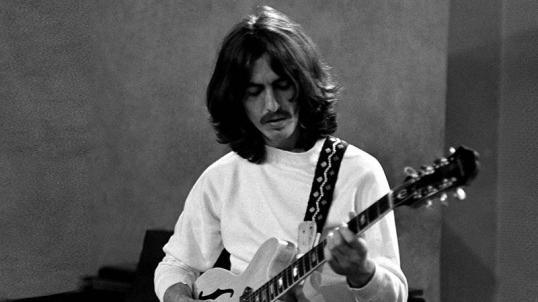 Today would have been the 77th birthday of my favorite members of the Beatles (not to mention The Traveling Wilburys), George Harrison.  Harrison died far too young but he left behind a legacy of music that is celebrated to this day and will still be celebrated long after the rest of us have moved on.

While everyone knows George from his music, what is often forgotten is that Harrison is also often credited with helping to revive the British film industry.  After the break-up of the Beatles, Harrison partnered with Denis O’Brien and formed HandMade Films.  At a time when British cinema was struggling both financially and artistically, Harrison served as executive producer for some of the best films to come out of the British film industry.  Harrison championed many talented British directors and he used his clout to get many otherwise difficult project produced.  It’s fair to say that, if not for his support, the members of Monty Python would never have been able to make the then-controversial Life of Brian, which is now widely regarded as one of the best British comedies ever made.

Today, on his birthday, here are four shots of four films executive produced by George Harrison. 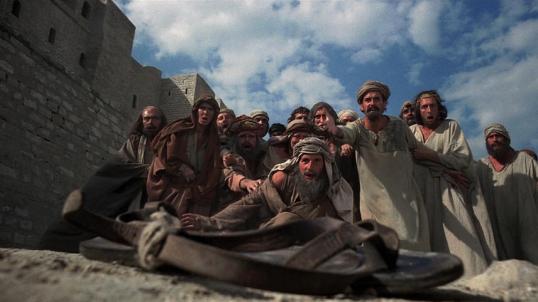 The Missionary (1982, directed by Richard Loncraine)

Withnail and I (1987, directed by Bruce Robinson)


Believe it or not, this song was inspired by a leaking roof.

One a rainy day, George Harrison discovered that the roof of his Friar Park home had a leak.  Harrison said that while watching the rain water leak through the roof, he realized that by surrendering to the problem and declining to make the effort to fix it, he was merely making the problem worse and this led Harrison to the realization that he “loved everyone.”  (That’s really a classic George Harrison story, isn’t it?)  Those feelings inspired Harrison to write this song, which went on to be the lead single off of his 1979 album, George Harrison.  I assume that he also fixed the roof though I have no way to be sure.

This video was directed by Neil Innes.  If that name sounds familiar, it’s probably because of the work that he did with Monty Python and the Bonzo Dog Doo-Dah Band.  Interestingly, Innes was also a member of the Rutles, a pastiche of the Beatles in which Innes played lead singer Ron Nasty.  More recently, Innes was a member of the brilliantly named Idiot Bastard Band.  This video is a good mix of Innes’s sense of humor and Harrison’s spiritual nature.


There were actually two videos released for George Harrison’s cover of Got My Mind Set On You.  I shared the better-known version yesterday.

The other version features Alexis Denisof, trying to win the heart of a young woman at an arcade by winning her a toy ballerina.  George and the band appear in a hand-cranked movie viewer.

Like the other version, this video was directed by filmmaker Gary Weis.  Along with the videos for Got My Mind Set On You and several short films for Saturday Night Live, Gary Weis also directed the videos of Paul Simon’s You Can Call Me Al and Walk Like An Egyptian by the Bangles.

The video above features George Harrison’s performing the song in a study while the furniture dances along to the music.  Just as that’s not actually George doing a backflip, the video wasn’t shot in George Harrison’s actual study.  Admit it, though.  If you ever heard someone say, “George Harrison was in his study,” you’d imagine the room looking just like the one in this video.

This video was directed by Gary Weis, who is probably best known for the short films that he directed for the first five seasons of Saturday Night Live, including the famous short where an elderly John Belushi visits the graves of all the other Not Ready For Prime Time Players and marvels at the fact that he outlived them all. 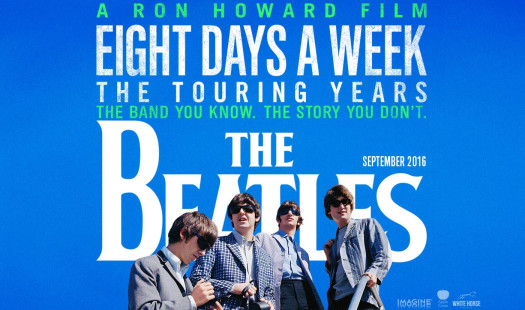 Beatle fans will have a blast watching THE BEATLES: EIGHT DAYS A WEEK – THE TOURING YEARS, director Ron Howard’s 2016 rock doc covering the Fab Four’s career from their earliest club days through the height of Beatlemania, until they stopped touring for good in 1966. The film features rare and classic footage of The Beatles live in concert around the globe, juxtaposing their rise with news events of the day and interviews with all four members. 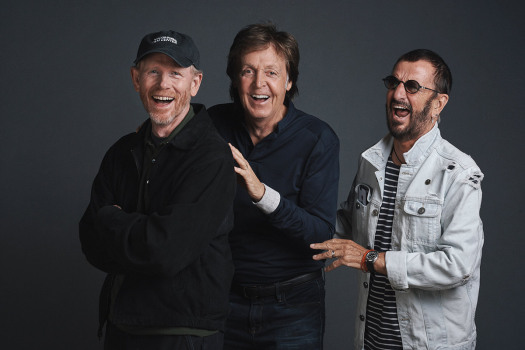 Howard conducted brand-new interviews with Paul McCartney and Ringo Starr, and included archival interviews with the late John Lennon and George Harrison. Through these and behind the scenes clips and press conferences, we get a sense of what it was like to be at the center of all the Beatlemania  madness. Ringo says it best: “We just wanted to play… playing was the only thing” far as these talented musicians were concerned, but…

June 2, 1967. The beginning of the so-called “Summer of Love”. The underground hippie culture was grooving toward the mainstream. And those four loveable mop tops, The Beatles , released their eighth album, “Sgt. Pepper’s Lonely Hearts Club Band”, on America’s shores, ushering in the concept of “concept albums” that still reverberates in music today. The Fab Four were Fab no more, but genuine artists, with a little help from their friend, producer George Martin.

The Beatles had stopped touring  the previous year, tired of the grind and the hysterical screaming that drowned their music out. They had done some experimenting in the studio with “Revolver”, their previous LP, but “Sgt. Pepper” was something different. Martin and the band members, influenced by both The Beach Boys’ “Pet Sounds” and Frank Zappa’s “Freak Out!” discs, utilized then cutting edge studio techniques (tape loops, sound effects, varying speeds) and instrumentations (sitar, harmonium, Mellotron, tubular bells, even…


I have never seen Mommie Dearest (1981), so I can’t speak to the tie-ins with that film. Wikipedia does assure me that the music video is inspired by both the book and the film. That’s actually kind of interesting. I say that because the song can only be inspired by the book since the album this was on came out two months prior to the release of Mommie Dearest. The music video was released at the same time as the film. That means the song and music video were only inspired by the book. This is according to Billboard magazine, circa September 19th, 1981

Going purely off of the music video, it seems to be doing several things. The first being that Joan Crawford was a force to be reckoned with that should strike fear into people’s hearts if she were to suddenly come back to life. I wouldn’t say that part is explicitly directed at her daughter Christina, but people in general. The second thing would appear to be a commentary on stable studio actors who are all waiting to be stars or struggling to hold on to stardom (Crawford and Davis), and having no problem killing off anyone who got in their way. That part being represented by the Catholic schoolgirls who act like vampires. However, that could also all be part of the way Christina was raised by Joan Crawford. That’s what some sites imply. The music video also seems to be saying that the greatest horror is that she lived so much under the watchful eye of her mother that she became her until we see her broken free to be left silently wiping the makeup off her face by the pool. It could be that the entire video is supposed to be one of Christina Crawford’s nightmares. Of course it’s all speculation based on the music video. I have not seen the movie, nor read the book. I just couldn’t resist spotlighting this during October.

The music video was filmed at Beulyland in Los Angeles that was allegedly the former home of silent film star Mabel Normand, also according to the aforementioned release of Billboard Magazine.

Richard Casey directed it, and appears to have only done a handful of music videos before going on to do other work in film.

If you’ve seen Kubo and the Two Strings, you’ll understand why.

Though I won’t spoil the movie, I will say that, when this Regina Spektor cover of George Harrison’s classic song started to play, there was not a dry eye to be found in the Alamo Drafthouse.

If you haven’t already, be sure to see Kubo this weekend!  Let’s make it the number one film in the country!

(It’s a Sunday night, February 9, 1964. Everybody’s watching THE ED SULLIVAN SHOW to get a peek at this new phenomenon called Beatlemania. The adults in the room are disgusted, saying things like “They look like a bunch of girls!”, “They must be sissies!”, and “Yeah yeah yeah? What the hell kind of song is that??” They just don’t get it.  But the six-year-old kid watching along does, and a lifelong obsession with rock’n’roll is born…)

From the opening shot of the Fab 4 being chased down the street by screaming teenyboppers to the final clanging guitar notes of the title tune, A HARD DAY’S NIGHT makes a joyful noise introducing The Beatles to the silver screen. John, Paul, George, and Ringo come off as a mod version of the Marx Brothers with their anarchic antics, guided by the deft hand of director Richard Lester. Shot in cinema verite style, this zany, practically…