In the 1951 film, Bride of the Gorilla, Raymond Burr plays a plantation manager who commits a murder.  Unfortunately, for him, the murder is observed by a witch who promptly puts a curse of Burr.  Now, every time the sun goes down, Burr transforms into a gorilla and goes wild in the jungle.

Basically, it’s kind of like The Wolf Man, just with a less sympathetic protagonist and a gorilla instead of a werewolf. Just in case we missed the similarities, Lon Chaney, Jr. plays the film’s nominal hero, a police commissioner who suspects that something weird might be happening with Burr.  Apparently, the plan was originally for Chaney to play the gorilla and for Burr to play the policeman but, because Chaney was dealing with a serious alcohol problem at the time, the roles were reversed.

Also in the cast, playing the role of Dina, is Barbara Payton, the tragic actress who is best known for being at the center of a love triangle involving actors Tom Neal and Franchot Tone.  In 195000, Neal attacked Tone and beat him so severely that Tone spent 18 hours in a coma.  Tone was notably shaky onscreen for the rest of his film career while Neal spent a few years in prison.  After the incident between Tone and Neal, Payton could only get roles in B-movies like this one.  Tragically, she would pass away, in 1967, of heart and live failure.  She was only 39 years old. 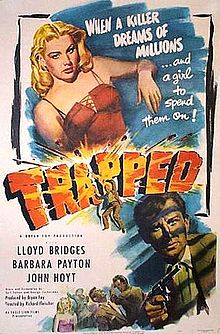 After being disappointed with Guest In The House, I decided to go ahead and watch the sixth film in Mill Creek’s Fabulous Forties box set and I’m glad that I did.  1949’s Trapped turned out to be an entertaining little discovery.

Eventually, the narration ends and the actual movie begins.  Fortunately, the rest of Trapped more than makes up for that awkward introduction.  The film opens with a bunch of Treasury agents looking over a phony twenty-dollar bill.  The bill is almost perfect and the agents believe that it was printed using plates designed by one of the world’s greatest counterfeiters, Tris Stewart (Lloyd Bridges).  The only problem is that Stewart is in prison.  Obviously, someone else has gotten their hands on Stewart’s plates.

Stewart is upset that someone is getting rich off of his work.  So, he strikes a deal with the Treasury Department.  In return for being released, he will help them track down his plates.  The Treasury Department agrees and arranges for Stewart to “escape” during a phony prison break.

However, Stewart has plans of his own.  As soon as he’s out of jail, he knocks out his handler and escapes for real.  Tris is not only planning on tracking down his plates but he’s also going to go back into business printing and passing phony money.  He also reunites with his girlfriend, nightclub hostess Meg Dixon (Barbara Payton).

When he meets Meg, he discovers that she has a new admirer.  Johnny Hackett (John Hoyt) likes to hang out whenever Meg’s working.  Even though Johnny appears to have a thing for Meg, he and Tris still become friends.  Tris is even willing to bring Johnny in on the operation but, what Tris doesn’t realize, is that Johnny Hackett is actually Treasury agent John Downey (John Hoyt)…

Shot on location in some of the seediest parts of 1940s Los Angeles, Trapped is a fast-paced and exciting film noir.  (This is one of those films, like The Black Book, where shadows are literally everywhere.)  Lloyd Bridges (who, as a young man, could have passed for Kirk Douglas’s brother) gives a great performance as the charming but ultimately cold-hearted Tris Stewart while John Hoyt does a fairly good job as the conflicted Downey.  Barbara Payton, one of the more tragic figures from Hollywood’s Golden Age, does such a good job as Meg that it’s even more tragic to consider that, just a few years after making Trapped, her career would be destroyed by alcoholism and personal scandal and she would eventually end up as a homeless prostitute on Sunset Boulevard.

Trapped was a good discovery and you can watch it below!