Over on Through the Shattered Lens Presents the Oscars, we are continuing to reimagine Oscar history, one year at a time! Today, we take a look at the year 1918. World War I ended, the Spanish Flu wiped out 5% of the world’s population, and the Academy embraced Tarzan of the Apes! 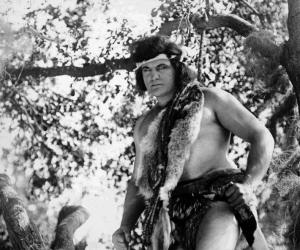 A scene from Tarzan of The Apes

1918 was a year of dominated by war and pestilence.  As the world seemed to be intent on destroying itself, both the Academy and American filmgoers embraced escapism.

Overseas, the Great War continued to drag on.  With no end to the fighting in sight, there were fears that the American public would turn against the war and their elected leaders would withdraw American soldiers from the fighting.  The British government, realizing the potential of film as a propaganda tool, contacted director D.W. Griffith and offered to help him make a film.  The end result was Hearts of the World, an epic war film that starred Lillian Gish as a French girl who struggles to survive and find true love as the Germans raid her village.

Lisa and I continue to reimagine the Oscar history, one year at a time. Today, we look at 1917. The U.S. enters World War I, the Pickfords take over Hollywood, and, for the first time, the entire membership of the Academy gets to vote.

On March 4th, 1917, President Woodrow Wilson took the oath of office and began his second term of President.  Just a few months earlier, he had run for reelection on a platform of maintaining American neutrality in the war that was ravaging Europe.  His slogan was “He Kept Us Out Of War,” and it was enough to allow him to survive one of the closest elections in U.S. History.

One month later, the U.S. declared war on Germany and entered into what would come to be called World War I.

Whereas the previous year had been dominated by films, like the Award-winning Civilization, that promoted neutrality and world peace, 1917 saw the release of several films that were designed to support the American war effort.  The pacifism of Civilization was forgotten as the box office embraced…