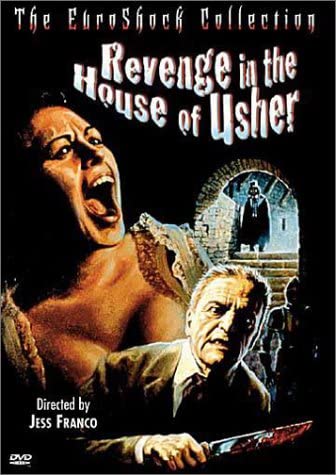 In the 1982 Spanish horror film, Revenge in the House of Usher, Antonio Mayans plays Dr. Alan Harker.  Harker receives an invitation to visit the estate of his former mentor, Prof. Eric Usher (Howard Vernon).  Usher is elderly and in poor health.  He’s attended to by several mysterious servants, including his physician, Dr. Seward (Daniel White).  While trying to figure out what has led to Prof. Usher’s current state, Harker discovers that….

Well, here’s where it gets confusing, as things tend to do whenever one tries to discuss the later films of director Jess Franco.  There are actually three different versions of Revenge In the House of Usher and each one of them tells a totally different story.  In the first version, Usher is revealed to have been a decadent, Giles de Rais-style serial killer who has murdered hundreds of women through the years and who is now being haunted by their vengeful ghosts.  Apparently, that version didn’t go over well when it made its debut at the 1983 Festival Internacional de Madrid de Cine Imaginario y de Ciencia-ficción.  The audience booed and laughed and Franco couldn’t convince any distributors to purchase the film from him.

So, Franco filmed thee more scenes that established that Usher wasn’t just a serial killer but that he was also a vampire!  (This explains why two characters in this Edgar Allan Poe adaptation were suddenly given names from Dracula.)  This reception of this version was not considered to be much of an improvement on the reception of the version where Vernon was just a serial killer.

With the backing of Eurocine, Franco then put together a third version of the film.  This time, he turned it into another Dr. Orlof film, though Howard Vernon’s character was still referred to as being Prof. Usher.  In this version, Harker discovers that Usher and his elderly servant Morpho (Olivier Mathot) have spent years abducting women from the village and using their blood to keep Usher’s daughter alive.  This leads to a solid 15 minutes of flashbacks to Usher’s past activities, all of which are taken directly from The Awful Dr. Orlof.  Just as in the other two version of the film, Usher is haunted by the ghosts of his victims.  As his mental state deteriorates, so does his castle.

As far as I know, the third version of the film is the only one that currently exists.  The first version is now considered to be lost.  For his part, Franco claimed that the first version was a misunderstood masterpiece but he was still willing to turn it into another Orlof film so that he could at least make some money off of it.  Franco may have been an often frustrated artist but he was also a pragmatist.

Considering its production history, it’s not surprising that Revenge in the House of the Usher is a bit of a disjointed film.  It’s only 91 minutes long (and 15 of those minutes is taken up with black-and-white footage from The Awful Dr. Orlof) but this film still feels like it has several false endings.  There were so many times that I thought the film had to be over, just for it to keep going.  Watching the film, one can sense that Franco is willing to try almost anything to finally wrap the film’s somewhat incoherent story up.  That said, Howard Vernon brings the right amount of haughty decadence to the role of the decaying Usher and Franco’s decision to film in an actual castle (and to largely utilize natural light) does give the film perhaps a bit more atmosphere than one would expect.  This is a lesser Franco film but it does do a good job of capturing the bizarre logic of dreams.  The film is, at times, so incoherent that it’s actually rather fascinating.

2 responses to “International Film Review: Revenge in the House of Usher (dir by Jess Franco)”