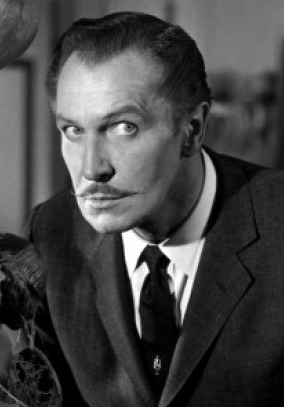 Price was born 111 years ago, in St. Louis, Missouri.  When he first began his film career in the 1930s, he was promoted as a leading man and he was even tested for the role of Ashley Wilkes in Gone With The Wind.  (Imagine that!)  However, Price would find his greatest fame as a horror icon.

Among the fans of Price’s horror films was a young animator named Tim Burton.  In 1982, Price and Burton would work together for the first time, with Price providing the narration for a short, stop motion film that Burton had written and directed.  Called Vincent, the film was about a seven year-old boy named Vincent who wanted to be — can you guess? — Vincent Price!  The six-minute film follows Vincent as he gets involved in all sorts of macabre activities.  Of course, as Vincent’s mom points out, Vincent isn’t actually a monster or mad scientist.  He’s just a creative child with an overactive imagination.  (To say the short feels autobiographical on Burton’s part would be an understatement.)  The animation is outstanding and full of wit but it really is Vincent Price’s wonderful narration that makes this short film a classic.

Both Price and Burton would later call making this film one of the most creatively rewarding collaborations of their respective careers.

2 responses to “A Blast From The Past: Vincent (dir by Tim Burton)”