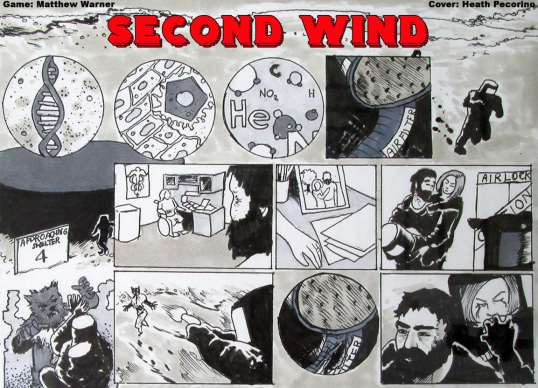 Society has collapsed.  Biological warfare has changed the majority of humans into werewolves.  Those who have not been infected live in locked-down shelters.  You live in Shelter 5, with your second wife Lorraine.  You used to live in Shelter 4 with your first wife, Wendy.  Wendy kicked you out after she found out that you were cheating on her with Lorraine.  Things have been tense ever since.

Now, Lorraine’s pregnant.  The midwife has told you that the delivery is not going as planned.  A C-section has to be performed to save the lives of both Lorraine and the baby.  (With humanity nearly wiped out, the survival of your baby could give hope to those few who remain.)  You have to get a doctor but that means making you way across the desert wasteland and the ruined city to Shelter 4.  Not only do you have to save the life of your second wife but you’re going to have to convince your first wife to help you do it.  You only have a few hours to make it and all of the shelter’s hoverbikers are damaged beyond use.  Best of luck!

Second Wind is an interactive fiction game for adults.  The stakes are real.  The puzzles require thought.  Your mistakes have consequences.  Puzzles are usually my great downfall when it comes interactive fiction.  Timed challenges are my second greatest downfall.  As you can probably guess, I had to play Second Wind a few times before I got anything close to a good ending and, even then, it was only as good as any ending can be when the world’s gone to Hell in a bucket without anyone even enjoying the ride.  But the challenge made the eventual success even more rewarding.  When playing a game like Second Wind, the best advice would be to remember that using google is not the same as cheating and that Occam’s Razor is your friend.  It also helps to take notes because a lot of the game’s puzzles depend on remembering numbers and then inputting them into the keypads necessary to enter the shelters.

I dug Second Wind.  It’s better-written than most and the descriptions are so vivid that you’ll feel like you’re in that apocalyptic desert, trying to make your way back home.  And if you really do get lost, there is a walk-through that explains the puzzles without leaving you feeling too ashamed for not being able to figure them out for yourself.