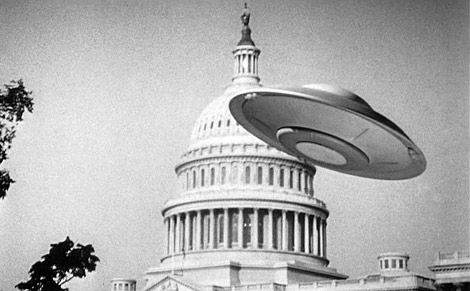 In Earth vs. The Flying Saucers …. well, the plot is right there in the title.  In a semi-documentary style, this film tells the story of what happens when a bunch of flying saucers come to Earth.  Unfortunately, the inhabitants of those flying saucers aren’t looking to open up a new trading route.  Instead, they want to enslave humanity and, as always, it falls to America to save the world.

This film is probably best known for the scenes of the flying saucers crashing into monuments and buildings in Washington, D.C.  The special effects were done by Ray Harryhausen.

The film was originally black-and-white.  The version below is colorized.  I’m not a huge fan of colorization in general but I do have to say that they did a pretty good job with Earth vs. The Flying Saucers.  While the film may not be as deeply philosophical as Plan 9 From Outer Space, it’s still pretty enjoyable.