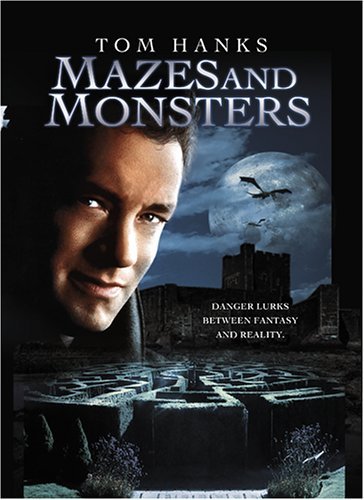 For today’s horror on the lens, we’ve got the 1982 made-for-TV movie, Mazes and Monsters!

Mazes and Monsters!  Sounds pretty scary, doesn’t it?  Well, have no fear.  Mazes and Monsters is just a role-playing game, one that definitely should not be mistaken for Dungeons and Dragons despite the fact that it’s exactly the same as Dungeons and Dragons.  Except, of course, for the fact that one game takes place in a dungeon and the other takes place in a maze.

A group of rich kids love playing Mazes and Monsters but, when they take it a step too far, it leads to the newest member of their group having a nervous breakdown, fleeing to New York City, and fighting demons that only he can see.  Our delusional hero is played by an actor named Tom Hanks.  Hey, whatever happened to him?

Anyway, Mazes and Monsters is kind of silly.  You’re going to get sick of Chris Makepeace’s hats pretty quickly.  It imagines a world where the most popular and attractive kids on campus just can’t wait to pretend to be clerics and magic users.  And yet, in its own melodramatic way, the film works.  If you’ve ever wanted to see Tom Hanks stab a green demon, this is the film to watch!  This was one of Tom Hanks’s first roles and he already looks a little bit too old to play a college student but his trademark likability is already evident.  When Tom has a moment of clarity and desperately announces that “THERE’S BLOOD ON MY KNIFE!,” it’s impossible for your heart not to ache for him a little.  Finally, as over-the-top as the moral panic about the possibility of LARPers going crazy in New York may be, the ending actually is surprisingly effective.