With Lisa on vacation this week, it falls to me to select today’s music video of the day.  I picked the video for Avirl Lavigne’s Sk8er Boi because nostalgia is everything and I can still remember when this song was playing everywhere.

The song’s about a girl who has a crush on a skater but she still rejects him because all of her snobby friends don’t know that all skaters grow up to be rich rock stars who make appearances on TRL and get to hang out with Carson Daly.  Meanwhile, the snobby girl becomes a single mother and I just realized that this song is really problematic.

In the video, Avril and her followers perform an impromptu concert in the middle of Los Angeles before Avril escapes in a helicopter.  This was filmed at the intersection of 7th and S. Spring Street in Los Angeles so if you live near either of those streets, what were you doing in 2002?

I remember when The Sims first came out, every teenage Sim girl looked like Avril Lavigne.  Later, with the Superstar expansion pack, your Sims could actually try to hang out with Avril. 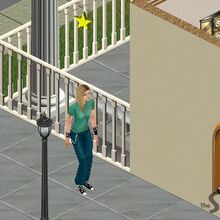 If you threw a really rocking party, she might even show up and see where you had trapped Drew Carey.

You can tell by the credit at the top of the picture that I’m not the one who actually did that to Drew but I wish I had.  That’s a clever way to keep your celebrity friends from ever going home.

But back to Sk8er Boi!  Sk8er Boi was actually optioned for adaptation into a feature film but nothing ever came of it.  I don’t know why because the whole story is right there in the lyrics.  It could still be made because there will always be snobby girls and skater boys.  The only thing that would have to change would be the part about the skater playing guitar on MTV because no one does that anymore.

The video was directed by Francis Lawrence, who directed all of the Hunger Games movies except for the first one.  It was nominated for a MTV Music Video award but who cares about those?

2 responses to “Music Video of the Day: Sk8er Boi by Avril Lavigne (2002, dir. by Francis Lawrence)”