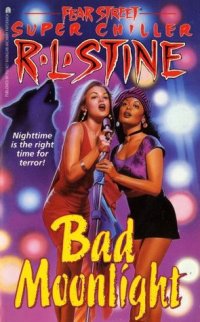 Before I say anything else, I have a confession to make.  I read this book really quickly.  I mean, I basically sat down, and skimmed over every page and didn’t write out a single note about the book.

Why was I reading it so quickly?  Bad Moonlight is a book that I ordered off of Amazon last month with the intention of reviewing it for October but then I changed my mind.  As often happens, I ended up running behind and, with Halloween approaching, I decided to set aside all of the Stine books that I hadn’t yet read and reviewed because I wanted to review a different (and, to be perfectly honest, adult) horror novel for Halloween.

Unfortunately, the book that I was planning on reivewing turned out to be really bad, despite the fact that it was co-written by one of my favorite filmmakers.  I didn’t feel like getting all negative on Halloween, especially when it would involve being negative about a filmmaker who I adore and who is no longer with us and whose legacy pretty much defines modern horror.  So I decided to put off reviewing that book (I’ll write about it in November).  Needing something for today, I grabbed R.L. Stine’s Bad Moonlight and I quickly read it.  Fortunately, R.L. Stine wrote books that are pretty much designed to be a quick read.

Bad Moonlight was first published in 1994.  It tells the story of Danielle.  Danielle is 18 but, in a rather creepy aside, we’re told that she looks like she’s closer to 12 because she’s not as developed as the typical 18 year-old.  She’s the lead singer in a band.  The band’s struggling but at least they have a totally hot roadie named Kit.  Anyway, one night, Danielle is inspired to write a song called Bad Moonlight and then she bites Kit’s lower lip until it bleeds.  The band’s fans love the new song and Danielle goes onto write several other songs that all deal with moonlight.  She also writes a song that may or may not be about the death of Joey, “the sound guy.”  Joey was murdered but who killed him?  Everyone thinks it was Danielle, mostly because Danielle is always having these weird hallucinations.  Since this is a Stine book, Danielle is also an orphan with a mysterious background.  She lives with her Aunt Margaret and she sees a psychiatrist named Dr. Moore.  Dr. Moore likes to hypnotize her.  That’s never a good sign.

Anyway, you can probably guess, just based on the title, that this book has to do with werewolves and a big conspiracy to make Danielle into a werewolf bride.  It’s actually kind of a fun book, because you can tell that Stine actually wanted to focus on all of the band melodrama but, because he’s R. L. Stine, he also had to toss in a bunch of werewolves.  The effort to bring the band drama and the werewolf mythos together is a valiant one and it kind of comes out of nowhere and you have to appreciate just how weird Stine allows things to get.  It’s an entertainingly silly book.

If nothing else, it shows how strange the world can look when it’s illuminated by …. BAD MOONLIGHT!