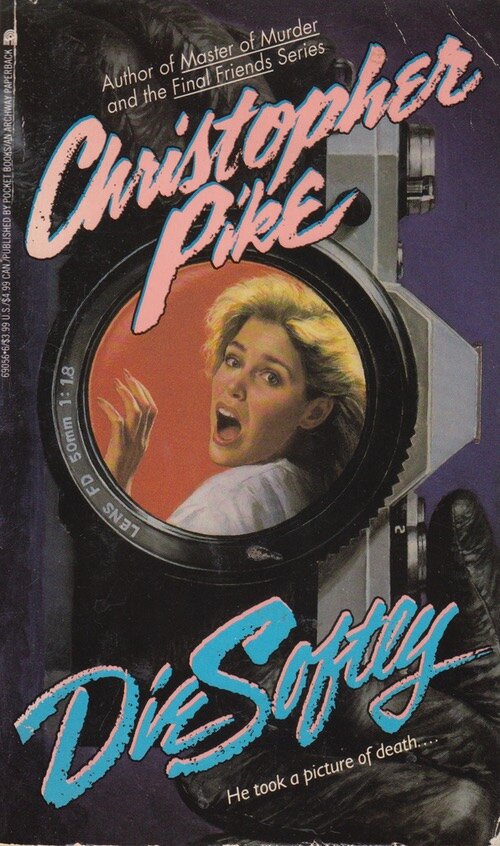 Seriously, that’s kind of my go-to reaction to almost any of Christopher Pike’s YA thrillers.  As an author, Pike has never allowed the fact that he was writing for a young audience get in the way of coming with some truly gruesome death scenes and some macabre scenarios.

Take the 1991 novel, Die Softly.  Now, technically, this is not a horror novel.  There aren’t any ghosts or vampires or anything like that.  Instead, this book centers on a bunch of murderous but nonparanormal high school hijinks.  Herb is an awkward 18 year-old who can take amazing pictures but who has no idea how to talk to people.  His best friend, Theo, is a drunk who spends his time shooting guns in the backyard.  (Admittedly, Theo only went downhill because of the death of his bother Roger in a mysterious car accident.)  Theo wonders if he and Herb will ever find love.  Herb imagines that they’ll both find someone to marry but they probably won’t ever have the courage to actually approach anyone that they actually love.  I mean, this is dark!

Anyway, Herb dreams of becoming a director in Los Angeles so he sets up a secret camera in the high school locker room so he can get a picture of the cheerleaders showering and …. wait a minute.  What?  Uhmmm …. what?  Techically, Herb does feel guily about it but …. agck!  Of course, the idea wasn’t originally Herb’s.  His childhood friend Sammie suggested it because of her own general hatred for cheerleaders.  Still, Herb didn’t necessarily have to go along with the idea.  Even he assumed Sammie was joking when she first suggested it.  But Herb, for all of his attempts to be a nice guy, is driven by crush on Alexa and his fear that he’ll never even get kissed, let alone see anyone naked.  (If this book had been written today, Herb would be an incel hanging out on Reddit.)

Anyway, long story short: when Herb develops his film, he thinks that he may have accidental photographed a murder.

And things get only crazier from there!  Die Softly is an enjoyably over-the-top little book, one that fully embraces the melodrama while taking a journey into the heart of high school darkness.  The plot has to do with cocaine and threesomes and Herb’s own rampaging insecurity, one that ultimately makes him something of a sympathetic character, even if he is someone whom most readers will have mixed feeling about.  It also ends on a far darker note than anything you’d expect to find in a book by R.L. Stine.

Die Softly is a teenage nightmare, a book about dreams that suggests that the best plan of action is abandon all hope, ye who enter here.  It’s also a lot of fun.  For the most part, Pike wisely eschews anything resembling subtlety.  Just because you’re taking a nihilistic journey into the heart of darkness, that doesn’t mean that you can’t be entertained.