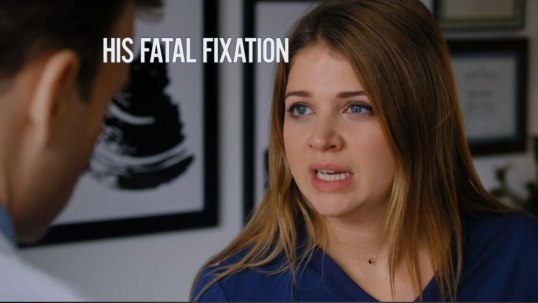 His Fatal Fixation tells the story of Lilly Abrams, a woman who discovers that not even changing her name can ensure her safety.

Lilly (played by Sarah Fisher) is a physician’s assistant.  When we first meet her, she’s getting ready for a date with the handsome and successful Jason.  However, that date is interrupted by the sudden arrival of Spencer (Stephane Garneau-Monten), Lilly’s stalker.  According to Lilly, she and Spencer went on one date and Spencer has been following her around ever since.  He claims that he just wants to protect her but it’s obvious that the only person that Lilly needs to be protected from is him.

Since Spencer’s arrival ruins dinner, Lilly and Jason go back to her place and order a pizza.  Unfortunately, when there’s a knock at the door, it’s not the deliveryman.  Instead, it’s Spencer!  Spencer promptly stabs Jason to death and, after slashing Lilly’s face, he ends up falling out of a window.  It appears that Spencer’s dead but …. is he?

A few months later, Lilly is trying to rebuild her life.  She’s moved to a new city.  She’s changed her name to Stella Gordon.  She takes medication to help deal with her PTSD.  And, after visiting a plastic surgery clinic, she even manages to get rid of the nasty scar that Spencer previously left on her face.  The folks at the clinic like her so much that they give her a job.  Soon, Stella is even having an adulterous affair with her boss.  You know that you’ve made it once you start cheating with a married man.

Still, Stella is haunted by her past.  She has frequent nightmares and sometimes, she swears that she can feel Spencer watching her.  But isn’t Spencer dead?  Stella knows that he certainly looked like he was dead after he fell out of the window but how can she be sure?

Strange things start happening.  Someone sends her a dozen lilies, just like Spencer used to do.  People die mysteriously.  Is Spencer back or is Stella losing her mind?  While Stella wrestles with that question, she also grows close to a heavily bandaged patient named Joshua.  Soon, Joshua will be removing the bandages and he’s specifically requested that Stella be there to see his repaired face….

His Fatal Fixation is an enjoyably over-the-top melodrama from Canada.  It’s the type of film where it’s best not to worry too much about the plot.  Sure, there’s all types of plot holes and the film’s characters don’t always act in the most logical or reasonable of ways.  But if you treat the film as the cinematic equivalent of a trashy, sex-filled novel, it’s a lot of fun.  The director even manages to craft some genuinely creepy dream sequences.

Sarah Fisher has appeared in a lot of these films and she does a pretty good job of capturing both Stella’s fear and her hope that she’s actually found a new life, away from her stalker.  Before she became a Lifetime mainstay, Sarah Fisher played Becky Baker on Degrassi.  One of the things that I love about Lifetime films is that they often provide a chance to check in on how my favorite Degrassi cast members are doing.  (Since many Lifetime films are Canadian productions, it’s not surprising to that they tend to be full of Degrassi alumni.)  Fisher is not the only former Degrassite to appear in His Fatal Fixation.  Cory Lee, who played Ms. Oh on the series, also has a small but important role.

His Fatal Fixation is an enjoyable Canadian thriller.  See it with someone who isn’t stalking you.

One response to “Lifetime Film Review: His Fatal Fixation (dir by Stuart Acher)”