The 1971 satire, Cold Turkey, is the film that boldly explores just how much into the ground one joke can driven.

It’s a film that imagines what would happen if a big tobacco company decided to try to improve its image by giving people an incentive to quit smoking.  In the real world, of course, they ended up funding Truth.org and coming up with anti-smoking commercials that were so lame that they would make viewers want to go out and buy a pack of cigarettes just to spite the self-righteous people lecturing them during the commercial breaks.  In the film, however, Marwen Wren (Bob Newhart) comes up with the idea of offering to pay 25 million dollars to any community that can completely stop smoking for 30 days.

Wren figures that no large group of people will be able to just give up smoking for a month.  Not in 1971!  However, Wren didn’t count on the single-minded determination of the Rev. Clayton Hughes (Dick Van Dyke).  Hughes is the stern and self-righteous minister of Eagle Rock Community Church in Eagle Rock, Iowa.  He knows that Eagle Rock could really use that money so he sets off on a crusade to convince all 4,006 of the citizens of Eagle Rock to take the pledge to quit smoking.

As I said at the start of this review, Cold Turkey is pretty much a one-joke film.  The joke is that everyone in the movie — from the tobacco company execs to the citizens of Eagle Rock to Rev. Hughes — is an asshole.  They start the film as a bunch of assholes and, once they try to quit smoking, they become even bigger assholes.  Soon, everyone in town is irritable and angry.  The only people happy are the people who never smoked in the first place, largely because they’ve been set up as a sort of paramilitary border patrol.  Even though his anti-smoking crusade lands him on the cover of Time, Rev. Hughes is also upset because he started smoking right before it was time to quit smoking.  He deals with his withdraw pains through sex and frequent glowering.

Wren is concerned that the town of Eagle Rock might actually go for a full 30 days without smoking so he attempts to smuggle a bunch of cigarettes into the town and then runs around with a gigantic lighter that looks like a gun.  It’s a storyline that doesn’t really go anywhere but then again, you could say that about almost all of the subplots in Cold Turkey.  There’s a lot of characters and there’s a lot of frantic overacting but it doesn’t really add up too much.  Storylines begin and are then quickly abandoned.  Characters are introduced but then never do anything.  For a while, It seems like the film is at least going to examine the Rev. Hughes’s totalitarian impulses but no.  Those impulses are clearly there but they’re not really explored.

If I seem somewhat annoyed by this film, it’s because it really did have a lot of potential.  This could have been a very sharp and timeless satire but instead, it gets bogged down in its own frantic storytelling and the film’s comedy becomes progressively more and more cartoonish.  By the end of the movie, the President shows up in town and so does the military and it all tries to achieve some Dr. Strangelove-style lunacy but the film doesn’t seem to know what it really wants to say.  It seems to be setting itself up for some sort of grandly cynical conclusion but instead, it just sort of ends.  One gets the feeling that, at the last minute, the filmmakers decided that they couldn’t risk alienating their audience by taking the story to its natural conclusion.

Admittedly, while watching the film, I did find myself comparing Hughes and his bullying mob to the same people who are currently snapping at anyone who suggests that maybe the Coronavirus lockdowns were a bit excessive.  It’s easy to think of some modern politicians and media figures who probably would have had a great time in Eagle Rock, ordering people around and shaming anyone who wants a cigarette.  But otherwise, Cold Turkey was just too cartoonish and one-note to really work. 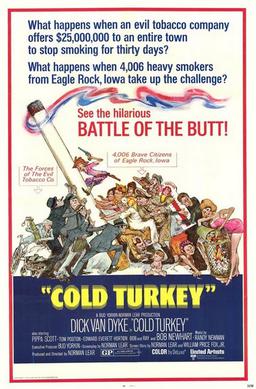