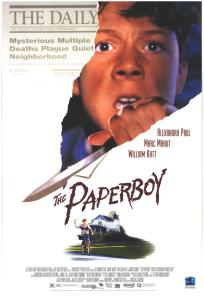 12 year-old Johnny McFarley (Marc Marut) is a paperboy who desperately wants to be a part of a stable family.  He wants Melissa Thorpe (Alexandra Paul) to be his mother but Melisssa has moved to a different town.  Johnny solves that problem by suffocating Melissa’s mother with a plastic bag, which causes Melissa to return home.  That’s one way to do it!

As soon as Melissa and her daughter, Cammie (Brigid Tierney), move into Melissa’s mother’s old house, Johnny starts making himself indispensable by doing things like mowing the lawn for free.  He also does things like break into the house in the middle of the night, plant hidden cameras, and demand that Melissa bake him a pie.  He wants Melissa to be his mother and because Melissa feels sorry for him, she indulges Johnny and his mood swings.  Even after everyone else in the neighborhood tells her that Johnny is a little bit off, Melissa continues to allow him into the house.  Not even the crazy religious lady saying that Johnny has “the mark of Cain” can dissuade Melissa.

Johnny will do anything to make Melissa his new mother.  But then Brian (William Katt), Melissa’s boyfriend, shows up and Johnny really goes off the deep end.

The Paperboy is an adequate killer child film.  Marc Marut gives a good performance as the creepy and disturbed Johnny and the movie does make an attempt to provide him with a believable backstory to explain why he’s become the little killer that he is.  The kills are all imaginatively staged and all the more disturbing because they feature a child as the killer and that really is the whole point of the whole psycho kid genre.  The main problem with the movie is that Melissa keeps overlooking Johnny’s clearly unstable behavior.  At the point when just about anyone else would have told Johnny to stay away and perhaps even called the cops on the little bugger, Melissa keeps letting him back into her life.  By the time that Melissa finally realizes that maybe Johnny actually is as dangerous as everyone has been telling her, you’re too frustrated with her to care.

One good thing about The Paperboy is that it features William Katt in a supporting role.  If there’s ever a Late Night Cinemax Hall of Fame, William Katt will be entitled to an entire wing.  Even though he spent the majority of the 90s appearing in low-budgets movies like this one, Katt always gave a good performance, like he does here.

The fourth episode of Night Gallery originally aired on January 6th, 1971.  It was the first episode of the new year and it continued to open with Rod Serling walking through a most curious museum, inviting us to take a look at the macabre paintings on display and consider the stories behind them.

Jackie Slater (Godfrey Cambridge) is a comedian who can’t make anyone laugh.  He’s just been fired from his latest job and even his loyal agent (Tom Bosley) is suggesting that it might be time to throw in the proverbial towel.  While Jackie drowns his sorrows at a bar, he’s approached by a man named Catterje (Jackie Vernon).  Chatterje explains that he can cast miracles but, because he’s not very good at his job, the miracles often have unintended consequences.  “I don’t care!”  Jackie says, “I’ll take the risk!”  Jackie wants people to laugh at him.  Jackie gets his wish but it turns out that he should have listened to Chatterje’s warning.

This segment was directed by Steven Spielberg, back when he was just starting his career and he was largely working in television.  Spielberg also directed Eyes, which was a highlight of the Night Gallery pilot.  Unfortunately, his direction of Make Me Laugh is a bit less successful than his work on Eyes.  Spielberg’s direction features none of the inspired touches that made Eyes so successful.  Part of the problem may be that this story takes place in the word of comedy and comedy has never been a topic for which Spielberg has shown much affinity.

Make Me Laugh does feature a good lead performance from Godfrey Cambridge.  Otherwise, this segment is largely forgettable. 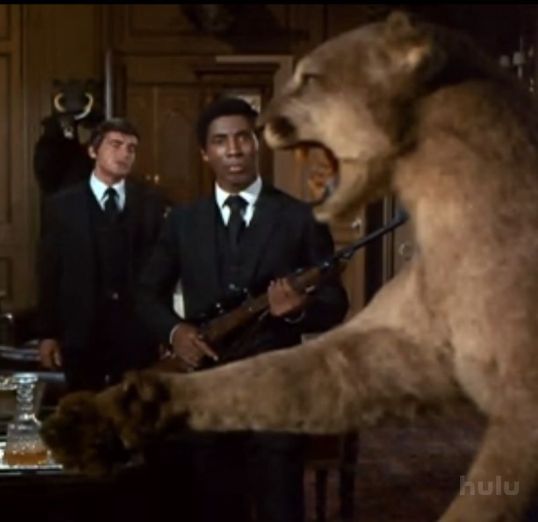 Cleans Kills And Other Trophies (dir by Walter Doniger, written by Rod Serling)

Raymond Massey plays Col. Archie Dittman, a wealthy racist who is obsessed with hunting and killing.  He even has a study full of the mounted heads of all of the animals that he’s killed.  Archie’s son, Archie, Jr. (Barry Brown), has just graduated from college and has no interest in hunting.  Col. Dittman demands that his son go on a hunt or risk being disinherited.  What the colonel fails to take into consideration is that both his bloodlust and his racism has offended his butler (Herbert Jefferson, Jr.) and that his butler has a magic-related revenge in mind.

Clean Kills and Other Trophies is hardly subtle but it does create and maintain a properly ominous atmopshere.  Raymond Massey gives a wonderfully villainous performance and it’s hard not to be amused by the fact that his son is wearing a peace signal prominently on his lapel, as if the segment’s director took one look at it and said, “What’s one thing that we can do to make the themes of this segment even more heavy-handed?”  The segment ends on a note that is so entertainingly over-the-top that it’s hard not to love it.

This episode was uneven.  Make Me Laugh does’t quite work but Cleans Kills and other Trophies is good enough to make up for the disappointing segment that precedes it.

Today we celebrate the 126 anniversary of the birth of cinematic pioneer, Josef von Sternberg!  That means that it’s time for…. 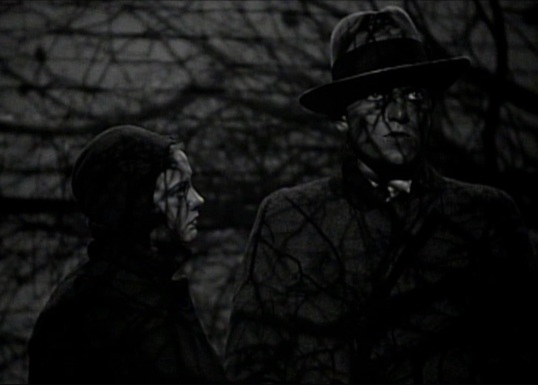 
Does everyone remember O-Town?  They were the band that was created on a reality show and we all thought that their name meant Orgasm Town but it was actually because they were from Orlando?  O-Town was the boy band that existed to make other boy bands look tough and dangerous by comparison.

All or Nothing is a typical boy band song and this is a typical boy band video.  The song is about the lead singer of O-Town realizing that his girlfriend is still hung up on Justin Timberlake.  He sings that he can tell by the distant look in her eyes and he just doesn’t think they can be together as long as she’s dreaming about Justin.  He wants it all or he’ll settle for nothing.  There’s no such thing as a compromise when you’re from the O.