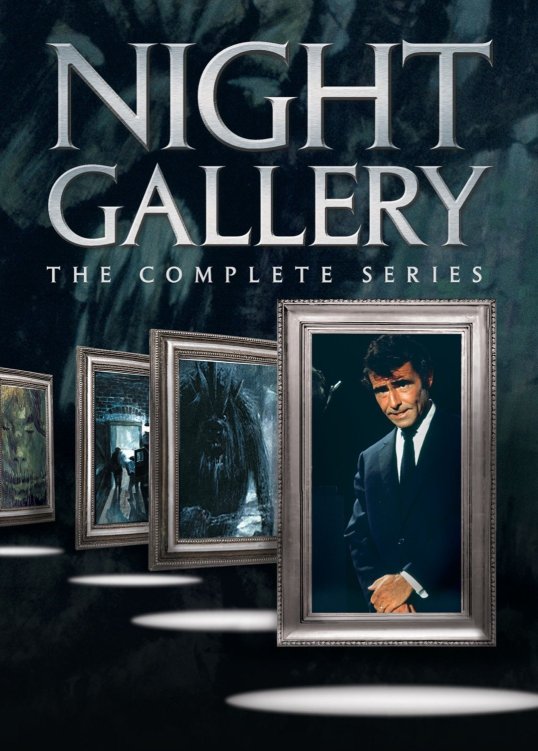 Though the pilot originally aired in 1969, Night Gallery did not start to air as a regular series until December of 1970.  The first episode of season one was broadcast on December 16th, 1970.  As all of the episodes did, it stated with Rod Serling walking through a dimly lit museum and inviting the audience to look at a macabre painting.  Each painting was inspired by a different story.  Or were the stories inspired by the paintings?  To be honest, I don’t think the show ever made that clear.

The first episode featured two stories, both of which dealt with mad scientists.

The Dead Man (written and directed by Douglas Heyes)

The first segment was The Dead Man, an enjoyably atmospheric if somewhat difficult-to-follow story about a scientist, a young man with an amazing ability, and the woman who is torn between the two of them.

Carl Betz plays Max Redford, a doctor who has discovered that, under hypnotic suggestion, John Michael Fearing (Michael Blodgett) can simulate any medical condition, no matter how severe.  When Max reveals his discovery to his associate, Dr. Talmadge (Jeff Corey), Talmadge is concerned that Fearing will suffer permanent damage as a result of Max’s experiments.  Nonsense! Max explains.  All he has to do is give Fearing the proper signal and he’ll pop right out of his condition, as good as new.

Max decides to put Fearing to the ultimate test by having him simulate death.  However, when Fearing goes under, he dies for real.  Was it just an accident or did Max — who suspects that Fearing was having an affair with his wife (Louise Sorel) — secretly mean for Fearing to die?

The Dead Man raises some intriguing questions about life, death, and medical ethics.  It also has a quartet of good performances with Carl Betz doing an especially good job as Max.  Michael Blodgett showed up in a lot of early 70s films and TV shows and he was always convincing as a decadent hedonist.  The entire segment is full of creepy atmosphere but the ending is a bit of a let down.  After a great set-up, the segment just kind of fizzles out.

The Housekeeper (written by Heyes, directed by John Meredyth Lucas)

In the second segment, our mad scientist is named Cedric Acton (Larry Hagman).  Whereas Max Redford, in the previous segment, was misguided, Cedric Acton is just crazy.  Through the use of black magic (it involves a frog), Cedric has been experimenting with soul and brain transference.  (There’s an oinking chicken and a clucking pig in his laboratory, just in case anyone’s wondering how the experiments are going.)

Because Cedric loves his wife’s body but hates her personality, he wants to put the soul of his kindly housekeeper (Jeanette Nolan) into the body of his wife, Carlotta (Suzy Parker).  At first, the experiment is a success but things get complicated and …. well, I’m not really sure what it all leads to because this is one of those stories that just kind of ends without really offering up any type of resolution.

The Housekeeper is meant to be a comedy but it’s a bit too mean-spirited to really work.  This segment really calls out for karma to intervene and for Cedric’s soul to end up in something else’s body but instead it just ends with Cedric continuing his experiments.  It’s more than a little dissatisfying.  Larry Hagman does a good job playing Cedric, though.  He’s convincingly crazy.

Especially after the pilot, it’s hard not to be disappointed by the first episode of Night Gallery.  Both stories had potential but they were let down by weak endings.  Oh well.  Hopefully, tomorrow’s episode will be an improvement!