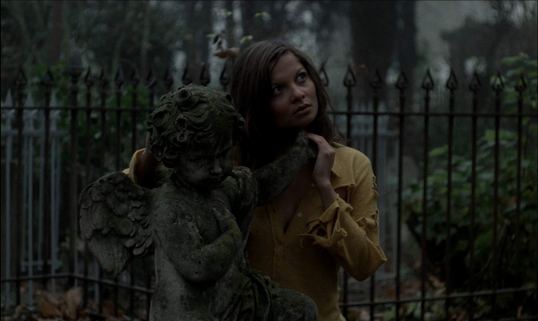 “Let’s go to the cemetery.”

That line is actually from another Jean Rollin film, Requiem for Vampire, but it also perfectly sums up the plot of his 1973 masterpiece, The Iron Rose.

A man (Hugues Quester) meets a woman (Francoise Pascal) at a wedding party.  They agree to go on a date, one which includes a railway station, a picnic, bicycling, and finally a walk that leads to a seemingly deserted cemetery.  On what seems to be a whim, the two of them enter the cemetery.  The woman seems to be fascinated with the place.  The man is dismissive, saying that funerals are an expensive, waste of time.  The woman believes that there is something after death.  The man is cynical, saying that once you’re dead, you’re dead.  As any couple would do after having a theological conversation, the two of them enter a crypt and make love.

While they’re busy making love, we discover that there actually are others in the cemetery.  There’s a clown that places flowers on a grave.  There’s a mysterious man who has been watching the couple as they walk among the graves.  (In the credits the man is called “Le vampire,” though he never actually does anything in the film that would indicate that he’s a bloodsucker.)  And then there’s the old woman who, as night falls, promptly closes the cemetery gates.

When the man and the woman emerge from the crypt, they discover that they are trapped.  There’s no way to open the gate and there’s no way to get out of the cemetery.  The two of them start to walk around, searching for either an exit or, at the very least, some sort of shelter for the night.  As they walk, strange things start to happen and we’re forced to reconsider our previous assumptions about not only the man and the woman but also the cemetery itself.  Did they enter the cemetery on a whim or did one of them specifically lead in the other?  As the night progresses, the feeling of impending doom only grows.  It all leads to a rather macabre fate for one of our lovers and a dance among the tombstones for another.

The Iron Rose is one of Jean Rollin’s best films and, sadly, it’s also one of his most unjustly obscure.  Even by the standards of Rollin’s early vampire films, The Iron Rose is a surreal film, one that is far more interested in creating a haunting atmosphere than in telling a traditional story.  What is the real reason that leads to the man and the woman entering the cemetery?  The Iron Rose is full of hints but, for most part, it’s left to the audience to answer that question for themselves.  The film’s haunting final scenes force us to reconsider everything that we previously assumed by the characters and their actions.  Are they obsessed with love or are they just in love with death?  There are no easy answers.

Obviously, a 90-minute film about two people walking around a cemetery is going to have some slow spots but, in this case, those occasional moments just add to the film’s ennui-drenched atmosphere.  As filmed by Rollin, the cemetery becomes as important a character as both the man and the woman and a reminder that the present is always going to be tied to the past.  The Iron Rose is Rollin at his dream-like best.