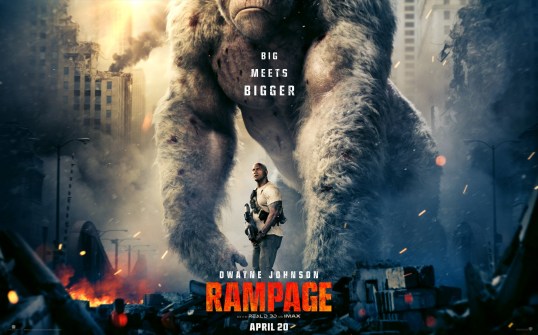 I thoroughly enjoyed this film!! Why? Because it’s a Dwayne Johnson movie.  He’s an actor, a brand, and you know what you’re going to get.  EVERY. SINGLE. TIME.  Did it have a couple of slow moments?  Yep.  Were the characters, especially the villains, one dimensional or 8-Bit?  Sure.  But, so what? Rampage is fun and sometimes it’s great to take a bath in nostalgia and see some shit blow up.

A Dwayne Johnson movie is really a sub-genre all its very own.  I won’t compare it to other movies.  His movies are also fun because we just like Dwayne Johnson so much as a Man that we feel like he’s a friend.  It becomes reflexive that we hear Dwayne Johnson has a movie out, it’s as if one of our friends just made one.  I told a guy at work that I was going to see a Dwayne Johnson movie, he knew exactly what I meant, and he referred to Dwayne Johnson as a National Treasure.  Yes, we’re now getting married in the fall and are registered at Pottery Barn.

I played Rampage when I was a wee bairn.  In fact, with the help of my friend Robbie, we stayed up all night and destroyed the whole country. Congratulations! I, like every boy in the Y-Generation, was excited for this film.  Sidenote: sorry everyone, Millenials are no more, you’ve been folded into Y, but take heart – “Even children get older, I’m gettin older …too.”

An Evil Corporation, run ostensibly by Ivanka Trump and her Generic Trump brother, create a virus that mutate ordinary animals into genetically spliced super-creatures that run amok.  That’s it- that’s the plot- and like the video game upon which it was based, Rampage the Film is beautifully Wabi Sabi.

The film begins with The Rock who is closed off from people because after seeing their terrible acts in war and poaching, he just can’t let them in. *sniff*  The Rock’s best friend is George- an albino gorilla- who can sign.  Soon, the Trump family look alikes’ experiment accidentally infects George, a wolf, a crocodile, and a partridge in a pear tree. The Partridge Monster doesn’t actually destroy anything, but he blatantly re-gifts Christmas presents; therefore, he’s the worst monster of all because he destroys your self-esteem.

George, the wolf, and crocodile get BIGGER, the government – embodied by Jeffrey Dean Morgan- try to stop the monsters, but can’t.  Jeffrey becomes an ally of The Rock, helping him along the way with helicopter keys, air strikes, and lending him his edger so The Rock can really make his lawn POP for barbecue season.  The Trumps put out a signal to draw the monsters to Chicago, hoping they’ll kill each other off.  The Trumps hope that they’ll be able to take a sample of the monster flesh, replicate it, and sell it to whomever.  It doesn’t go well.  The monsters go nuts.  I’m not going to spoil anything.  Needless to say, the last 40 minutes of the film are amazingly satisfying. 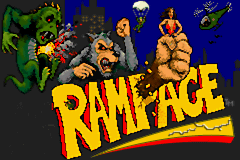