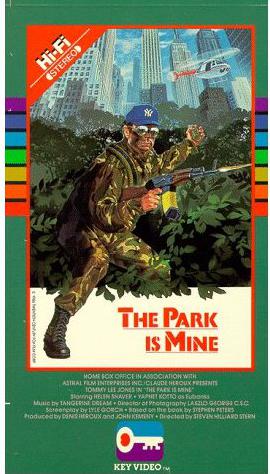 Tommy Lee Jones is Mitch, a troubled Vietnam veteran who has just lost his job and who can not convince his ex-wife to let him spend any time with his kids.  One day, Mitch receives a letter from Mike, a friend who has recently committed suicide.  In the letter, Mike explains that he has been stashing weapons and explosives in Central Park.  Before he discovered that he had cancer, Mike had been planning to take over the park as a symbolic protest against government bureaucracy.  Now that Mike is dead, it is now Mitch’s job to declare, “The park is mine!”

When Mitch takes over the park, he announces that he does not want to hurt anyone.  Instead, he wants everyone in New York to spend some time to thinking about their lives.  “There’s a lot of people like me, who don’t feel like they have any control over their lives,” he says, “Think about how you treat people and how you want to be treated.”  Meanwhile, he will be camping out in the park for 72 hours and anyone who tries to come after him runs the risk of getting shot or blown up.   Then he orders everyone to vote for Bernie Sanders and make America great again.  Or at least he would if this film had been made today, instead of in 1985.

Deputy Mayor Dix (Peter Dvorsky) is so evil that he makes Ghostbusters‘s Walter Peck look reasonable.  Dix is personally offended that Mitch has taken over Central Park.  He is so offended that he is even willing to first call out the National Guard and then hire foreign mercenaries to sneak into the park and track Mitch down.

Reporter Valerie Weaver (Helen Shaver) also sneaks into the park so that she can interview Mitch.  When Mitch captures her, he shouts at her, “GET NEKKID!”  No, it’s not that type of movie.  Mitch just wants to make sure that she’s not carrying any weapons on her.  (The Park Is Mine was made for HBO.  Even in the 80s, HBO understood the importance of getting nekkid.)

One of my favorite things about The Park Is Mine is that, after he goes to all the trouble to paint his face and dress up in camouflage, Mitch still spends the entire movie wearing a blue Yankees cap that would make him an easy target for anyone with a scope.

My other favorite thing is that, after Mitch asks everyone to think about how they treat people, a crowd of people gathers outside the park.  When a reporter interviews them, a burly man with a hockey mullet and dressed in denim steps up and says, in a perfect Canadian accent, “My name is Elton Costanza.  I’m from Queens!” 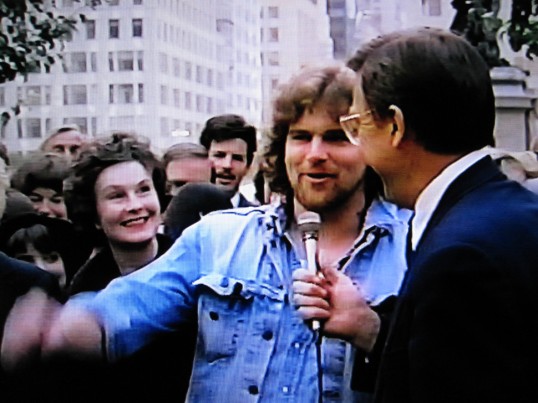 I’m not sure if Elton Costanza is meant to be related to George Costanza.  He does look like he could be a distant cousin.

The rest of the film’s depiction of New York City is about as plausible as Elton’s accent.  For a film taking place in New York in the 80s, the streets are too clean and the people are too friendly.  Even when that crowd shows up to support Mitch, they are the most polite crowd that anyone could hope for.  That may be because. though The Park Is Mine takes place in New York, it was filmed in Toronto.

The Park is Mine is both thoroughly implausible, totally heavy handed, and stupidly entertaining. Tommy Lee Jones is one of the few actors who can actually sell a line like, “The park is mine!” and Yaphet Kotto provides good support as a policeman who is sympathetic to Mitch.  Peter Dvorsky is all too believable as the ultimate example of heartless bureaucracy.  The most interesting thing about The Park Is Mine is that it comes down, without a hint of ambiguity, on the side of a domestic terrorist.  That probably would not be allowed to happen today.  In fact, the entire film feels like a relic of a past age, a celebration of an individualistic philosophy that America once embraced but, ever since the trauma of 911, has been in the process of abandoning.  If Mitch was unhappy with America in the 80s, imagine how he would feel about the Patriot Act, NSA spying, too big to fail bailouts, and campus safe spaces.

Like Let’s Get Harry, The Park Is Mine is pure 80s hokum that deserves a nostalgic DVD release.