Before I get to far into reviewing the unjustly obscure British horror film, Death Line, I want you to take a look at the film poster below. 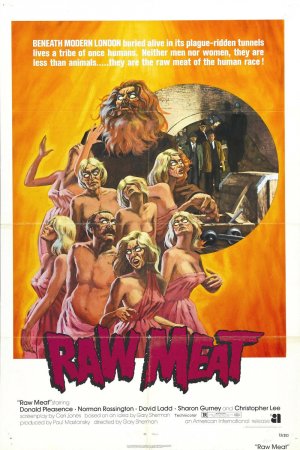 This is the poster that was used when Death Line was released in the United States.  Now, I have to admit that I like this poster but that’s largely because I’m a lover of old grindhouse and exploitation films.  And this poster is a perfect example of the grindhouse aesthetic.  Of course, it’s not surprising that this poster is largely misleading.

First off, the title has been changed to Raw Meat.  That makes sense when you consider that the film is about a cannibal but it also creates the mistaken impression that this film is primarily about cannibalism.  It’s not.  Actually, Death Line is a film about class differences and government secrecy.  (Though it’s probably best to leave this as a topic for another post, I think it can be argued that almost every film made in the UK is, in some way, about class and secrecy.)

The bearded man is obviously meant to be a stand-in for Death Line‘s cannibal.  Known as the Man and played by Hugh Armstrong, he is the last descendant of a group of Victorian railway workers who were buried alive during the construction of the London underground.  The Man is the product of generations of cross-breeding.  And while the Man is definitely frightening at first, he ultimately emerges as the film’s only truly sympathetic figure.  He’s hardly the intimidating figure pictured above.  Instead, he’s a heart-breakingly pathetic figure who, having grown up in the shadows of the underground, is only capable of uttering three words: “Mind the doors.”  There’s a lengthy scene in which the Man howls in anguish after the death of his wife.  I don’t care if he was a cannibal, it still brought tears to my eyes.

The poster does offer up a glimpse of two men who appear to be searching an underground tunnel.  This image, at the very least, is accurate.  The two men are Inspector Calhoun (Donald Pleasence) and his partner, Detective Sergeant Rogers (Norman Rossington).  When the Man makes the mistake of attacking, murdering, and eating a member of a Parliament, Calhoun and Rogers are the ones who end up investigating the case.  What’s interesting is that neither Calhoun nor Rogers are presented as being sympathetic characters.  In fact, Calhoun is something as a fascist.  When Christopher Lee tells them to stop investigating the case, Calhoun is less upset over the government cover-up and more angered by the fact that he doesn’t like being told what to do.

There are two other people investigating the case, though neither one of them are present on the poster.  Alex Campbell (David Ladd) is an American college student and, though Alex starts out as sympathetic to the Man, that changes when the Man kidnaps his girlfriend (Sharon Gurney) and tries to make her into his new wife.  Alex serves as a stand-in for the self-righteous activists who, in most films, would be responsible for saving the day.  It’s telling of just how cynical a film Death Line is that Alex ultimately turns out to be even more ineffectual than Calhoun and Rogers.

Finally, the poster offers up a group of half-naked people.  I have no idea who these people are supposed to represent but I’m sure they helped to sell tickets!

As for Death Line, it’s an unjustly obscure film.  Whether you track it down under the original title or the Americanized title of Raw Meat, be sure to watch it.