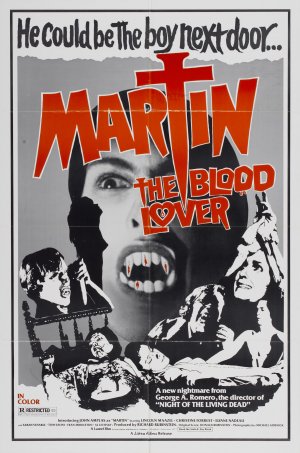 When I say “George Romero,” you probably immediately think of zombies.  And why not?  Night of the Living Dead is perhaps the best known zombie film ever made and Dawn of the Dead is perhaps the second best known.  Day of the Dead and Land of the Dead both have their fervent admirers.  Without the work of George Romero, there would be no Walking Dead.  Without the zombie films of George Romero, countless children would have never grown up to become horror filmmakers.  Without George Romero, there would have been no Italian zombie films, which means that I would never have fallen in love with Italian horror and I wouldn’t have been tweeting about it that day in 2010 when Arleigh asked me if I wanted to be a contributor to this website.

Seriously, we all owe a lot to the zombie films of George Romero.

Martin (John Amplas) is young, nervous, socially awkward, and enjoys drinking blood.  The sun makes him slightly uncomfortable, though it does not make him burst into flames.  He has frequent black-and-white flashbacks, in which he sees himself pursued by villagers carrying torches and pitchforks.  Occasionally, Martin calls up a radio talk show and has actually gained an audience of listeners, who only know him as “the Count.”  Martin believes himself to be a vampire.  Of course, he’s not.  Instead, he’s just a creepy and mentally unbalanced necrophiliac.

Unfortunately, for Martin, his extremely religious uncle Tateh Cuda (Lincoln Maazel) is also convinced that Martin is a vampire.  Martin’s parents have died and Cuda has agreed to allow Martin to live with him in the dying industrial town of Braddock, Pennsylvania.  As soon as Martin arrives, Cuda greets him as “Nosferatu” and tells him that if he kills anyone in Braddock, Cuda will pound a stake into his heart.

(Of course, what Cuda doesn’t know, is that Martin already murdered a woman during the train ride from Indiana to Pennsylvania.)

Upon arriving at his new home, Martin works at Cuda’s butcher shop and, defying his uncle’s orders, gets to know his cousin Christine (Christina Forrest).  Martin finds himself torn between his fantasy life as a vampire and the chance to lead a normal existence in Braddock.  He meets a bored housewife, Mrs. Santini (Elyane Nadeau), and soon is having an affair with her but he still finds himself driven to search for blood.

Meanwhile, Cuda watches and continues to sharpen his stake…

Martin is a dark and grim (and yet, at times, darkly humorous) portrait of two people living under a shared delusion.  Just as Martin gains satisfaction by imagining himself as being a supernatural vampire known as the Count, Cuda feels that his purpose in life is to protect the community from bloodsuckers like his nephew.  Both of them need the other to function but they’re equally destined to destroy each other.  Amplas and Maazel both give excellent performances and Romero captures a tragic sort of beauty to Braddock’s decay.

Martin may be one of Romero’s less known films but it’s also one of his best.