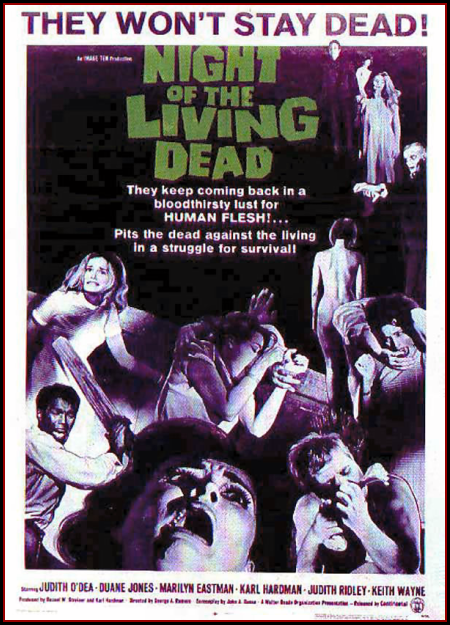 I wasn’t born yet when George A. Romero’s Night of the Living Dead was first released in the theaters. I’ve wished many-a-night that I was much older and gotten to have seen this classic of all classic horror film up on the big-screen. Night of the Living Dead simply changed the film industry forever and showed that horror has taken an uncharted road towards realism, brutality, and true horror. Horror films prior to Romero’s film either took on the classic 1940’s Universal look or that of the technicolor Hammer Films. Night of the Living Dead became the torchbearer of what would soon morph into the splatter and exploitation films of the following decades. The influence this film has had on horror filmmakers has yet to see an end.

Zombie films were not an unknown thing during the decades preceding Night of the Living Dead. There has always been zombie films, though they were more of the traditional Haitian voodoo variety where the zombies themselves were heavily-drugged victims forced to become slave labor for their unfeeling and sadistic masters. George Romero changed all that in 1968. Filmed at a measly budget even at that time, Romero and a company of his friends and colleagues decided to make themselves a horror movie. The premise of the film was simple. Radiation from a returning Venus probe (though later films in the series have discounted this reason for something more vague and amorphous) have, for some unexplained reason, brought the recently deceased back to a semblance of life with only the most basic of motor skills. This in itself was a terrifying enough plot, but Romero ratcheted things a bit by giving these zombies a new motivation: they have an unending hunger for the flesh of the living. Night of the Living Dead marked the beginning of horror at its most extreme.

The story was heavily influenced by Richard Matheson’s seminal apocalyptic vampire novel, I Am Legend, and Herschel Gordon Lewis’ Blood Freaks and Two Thousand Maniacs. The former lending the theme of an impending and encroaching horror with a siege by a legion of undead being the heaviest influence. The latter influences from Lewis’ work being the overt and unflinching look at exploitative violence and gore. Lewis’ Blood Freaks and Two Thousand Maniacs didn’t skimp in showing gore, but Romero’s Night of the Living Dead was the first to actually put a decent story behind all the carnage and violence.

The film begins pleasant enough with a brother and sister on their way to a countryside cemetary to visit their dead mother. Right from the beginning the film already takes on a disturbing note. As both siblings soon come under attack from what seems like a transient. Barbara (played by Judith O’Dea), the sister, soon is fleeing for her life as their attacker continues to chase her and with her brother, Johnny, already down. The breakneck and tension-filled sequence of the first ten minutes of the film still makes my pulse pound everytime I watch it. The story soon introduces the strongest character in the film. But as strong-willed and level-headed Ben (Duane Jones in a career signature performance) seem to be he still shares the flaw which would lead to fatal mistakes later on in the film. The rest of the cast soon follow Ben’s appearance. There’s Harry Cooper (Karl Hardman), his wife Helen (Marilyn Eastman) and their injured daughter Karen (Kyra Schon). The rest of the cast in the farmhouse is rounded out by local couple Tom (Keith Wayne) and Judy (Judith Ridley). With the farmhouse gradually being surrounded by a growing horde of undead attracted by the noise of their work to secure the building, one would think the group would work together and hand in hand to try and survive the encroaching night until help arrives. But group dynamics within the group begins in misunderstanding and bitterness between the parties. This gradually and slowly escalates into open conflict and self-preservation without any regard for their fellows.

That infighting and the inability for the group to work together in concert and harmony became Night of  the Living Dead‘s strongest message and observation about the human condition in times of great stress and upheaval. The characters were all fully realized and full of complexity that’s rare in horror films of its generation. It’s that attention to realism in how the characters were written which gives the conflict between the survivors such impact on the viewer. As much as one would say, after seeing the group disintigrate, that they’re stupid and idiotic it’s difficult to admit that given the same situation others wouldn’t fall to the same infighting, backstabbing and counter-productive behavior as the people did in the farmhouse. Romero’s damning commentary on humanity’s inability to work together has led to strife and conflict throughout the ages, and Night of the Living Dead points this out as brutal, blunt and matter-factly as possible.

The horrific nature of Romero’s film became even more horrific because of a decision based primarily on the economics of making a film. Color film stocks were already available in the 1960’s but were still considered quite expensive to use. Only the major studios and those independent filmmakers with a large financial backing could afford to use color film stock. So, Romero decided to fall back on the abundant supply of black and white film which was still in heavy use in the film industry. It helped that Romero’s work as a documentary filmmaker in the past made it easier for him to procure film for his project. This decision also gave Night of the Living Dead its signature cinema verite look at horror of the mundane. The grainy look of the film footage gave the film an immediacy only seen and realized with the 8mm home movies of that generation. Add to that the economical and flawless editing by Romero with the minimalist, bass and reverb heavy soundtrack and the film took on a life of its own. Night of the Living Dead‘s creeping dread and horror became so heavy that I’m surprised there weren’t more complaints of people walking out of this film when it was first released. The horror in this film was palpable to the point one could feel it days after one has finished watching the film.

There really wasn’t much to complain about this film. Horror aficionados now had a film that went beyond the exploitive nature of the genre. The film also helped usher in the next generation of filmmakers who saw that film didn’t just have to be all about entertainment, but could also be used as a platform to express one’s beliefs about the social, political and economical nature of the world at that moment. Night of the Living Dead had it all. It spoke to filmgoers young and old that the age of fun and silly, fantastical horror was over and that a new wave of horror in all its realistic glory was about to descend on the populace. Night of the Living Dead didn’t look away once the violence began. Flesh was shown being ripped off the limbs of their victims. Long ropes of intestines and quivering mass of organs were seen being handled and devoured. It was this Vietnamization of film violence which ushered in a new era in what filmmakers could get away with in years to come. But in 1968 it was violence that were usually reserved for late-night drive-in exploitation cinemas. It was a film whose violence it’s initial viewers were unprepared to see. I say this not of adults watching it for the first time but the 11-12 year old kids who actually saw it on Saturday morning double-bill matinees at the theater. One moment these kids were watching the latest adventures of Flash Gordon or Buck Rogers on the silver screen then the next they got flesh-eating ghouls, damning political, racial and social themes bombarding their young, impressionable minds.

1968 has gone down as the flashpoint for the beginning of a new era in filmmaking. Night of the Living Dead didn’t just influence horror filmmakers, but filmmakers in general. Its not a surprise that Romero’s film has even found its way into the Smithsonian National Film Registry as a film which heavily influenced the art of filmmaking. It’s been almost years since the film first shocked audience worldwide and four decades removed it still shocks audiences seeing it for the first time and still delights devotees of the film. Night of the Living Dead marks the arrival of not just a new era in filmmaking and horror, but the arrival of a genuine, guerilla film auteur seen by fans and critics alike as a master of his craft.