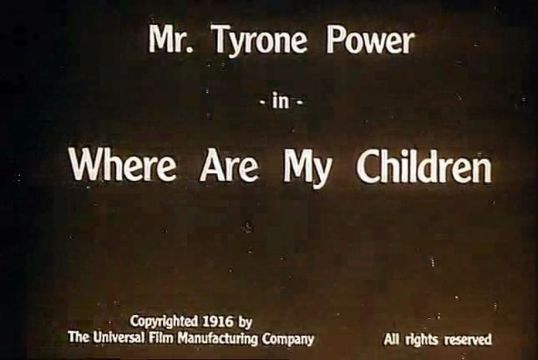 I love melodrama, don’t you?

Well, I hope you do because, for the next 10 days, I’m going to be taking a chronological look at fifty of the best (and worst) film melodramas of all time!  I’m going to start with a silent film that’s nearly 100 years old.  Written and directed by Lois Weber, one of the first female filmmakers, Where Are My Children? is a melodramatic look at an issue that is just as controversial today as it was when this film was first released in 1916.

Where Are My Children? tells the story of John Walton (played by Tyrone Power, Sr.), a upright district attorney who feels that all crime could be prevented if only there was a way to stop irresponsible and morally lax people from reproducing.  Walton’s only regret in life is that he and his wife have never had any children of their own.  While Walton is busy dealing with the prosecution of a medical practitioner who has been arrested for distributing pro-birth control literature, his wife is hiding a secret from him.  Because they would rather have social lives than families, she and her friends have been secretly getting abortions…

One of the great secrets of American film history is just how weird much of silent cinema truly was.  I think we tend to assume that because silent movies are old, they also have to be primitive, corny, silly, slow, and out-of-touch.  And, often times, they are!  But, if you’re a serious student of film, you owe it to yourself to watch as many silent movies as you can.  It’s important to know the history of what you love and a film like Where Are My Children? is quite definitely a part of that history.  Add to that, for every five silent films that have been rendered almost unwatchable by the passage of time, there’s going to be one — like Where Are My Children? — that has held up fairly well.  There’s an undeniable pleasure to discovering a silent film that still — despite all the odds — remains interesting.  And, finally, there’s the fact that silent films are often odd in ways that you’d never expect.

Let’s take Where Are My Children? for instance.  This is one of those films that literally opens in Heaven, with a lengthy explanation of how there are three different levels of babies — the “chance” children, the “unwanted” (who, we are told, are constantly sent back to Heaven and have been marked with the “sign of the serpent,”), and then finally there’s the select few children who have been blessed ahead of time “by the almighty.”  Creepy, no?  As the film progresses, it becomes obvious that Where Are My Children? is a pro-eugenics film.  Eugenics, of course, is the horrific idea that only certain, elite people should be allowed to have children, because of course undesirable adults will just have undesirable children who will eventually grow up to undesirable things.

Needless to say, a lot of very evil people have used eugenics to justify doing a lot of very evil things but what is often forgotten (or not even acknowledged) is that during the early 20th century, eugenics was considered to be a very progressive concept.  For all the good work that Margaret Sanger did towards promoting birth control and sex education, she was also a supporter of eugenics.  It was her 1916 arrest and trial for distributing contraception that inspired Phillips Smalley and Louis Weber to make Where Are My Children?

Ironically enough, this film — which, with its pro-sex education message, would probably be considered quite liberal by the cultural standards of 1916 — is probably now best known for being strongly anti-abortion, with Weber and Smalley going as far as to use double exposure (which was quite an advanced technique back in 1916) to show us the children that will never be born to the film’s characters.  It’s the sort of thing that would never happen in a mainstream movie today.  It’s also the sort of thing that a lot of modern progressive audiences will undoubtedly find to be incredibly offensive.  But, speaking as someone who strongly believes in my right to make my own decisions about what I do with my body, I find films like Where Are My Children? to be fascinating.  It has nothing to do with politics and everything to do history.  Where Are My Children? is a valuable time capsule.

7 responses to “Embracing the Melodrama #1: Where Are My Children? (dir by Phillips Smalley and Lois Weber)”