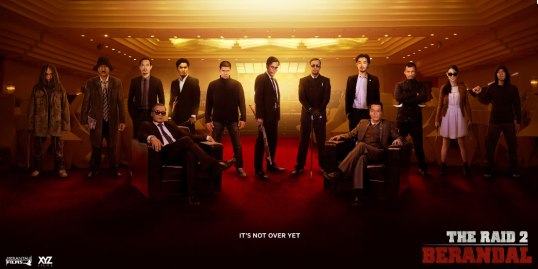 The Raid 2: Berandal premiered today at this year’s Sundance Film Festival. We’ve already gotten two previous trailers and teasers. We now have a third one that just adds to the awesomeness of what I will now dub as the best film of 2014.

It’s been a while since I shared any of those wonderfully dramatic Sid Davis educational films that were designed to encourage our parents to stay in school, stay healthy, and stay American.

With that in mind, here’s Keep Off The Grass.  Initially filmed in 1969, Keep Off The Grass tells the story of what happens when Tom’s parents find out that Tom thinks that marijuana is no big deal.  At both the insistence of his father and the local cops, Tom takes a serious look at his stoner friends and discovers that they’re all a bunch of losers.  As is typical of a Sid Davis educational film, there’s a disapproving narrator who is quick to make sure we all know that all of Tom’s friends kinda sorta suck.

Enjoy Keep Off The Grass!

This weekend, I watched the Lifetime original movie Flowers in the Attic.

How could I not watch it?  From the minute Lifetime first started to air commercials for it back in November, I knew I was going to watch Flowers in the Attic.  What especially captured my attention was the way Flowers in The Attic was referred to as being “the book you weren’t allowed to read.”  Even though I hadn’t even heard of the book before I saw the commercials, that tag line hooked me.  The forbidden is always so inviting.

Add to that, every time I mentioned Flowers in the Attic on Twitter, Mason Dye (who played Christopher in the film) always favorited my tweet.  That was so sweet that there was no way I couldn’t watch the movie.

The time is the 1950s.  The recently widowed Corrine (Heather Graham) returns to her childhood home in Virginia.  As Corrine explains to her children, she comes from a rich family but was disowned when she left home.  Now, her plan is to make up with her disapproving father and inherit his fortune once he dies.  Corrine also claims that the only way for her to win back her father’s love is for her to keep the existence of her children a secret.

Hence, Corrine’s children — teenagers Cathy (Kierna Shipka) and Christopher (Mason Dye) and twins Carrie and Cory — are forced to hide in the attic while Corrine charms her father.  The children are watched over by their ultra-religious, abusive grandmother (Ellen Burstyn).

Once in the attic, the children soon realize that Corrine doesn’t seem to be in any hurry to win their freedom.  While Cathy and Christopher struggle to come of age without any adult supervision, Grandma occasionally brings up mysterious powdered donuts.  Soon, Cathy and Christopher are exploring their desires and the twins are falling ill…

It all worked.  This was Lifetime at its absolute best: entertaining, fun, and wonderfully melodramatic.  Along with being full of wonderfully gothic Southern atmosphere, Flowers in the Attic featured great performances from Heather Graham, Mason Dye, and Kiernan Shipka.  Best of all was veteran actress Ellen Burstyn, who made Grandma into a wonderfully over-the-top monster.

If I have any complaints, it’s that the film’s conclusion felt a bit abrupt.  However, a sequel to Flowers is already in production so that ending was actually a perfect set-up for part two of the story.

Cathy was into ballet, just like me!  If I ever found myself locked in an attic for a year and a half, I’d probably use the time to do some pointe work as well.