I’ll admit that I’m not very experienced in writing about The Hottie of the Day. The things that move me about women may not be what moves everyone else. Along with that, you have to find something really cool and interesting to say about the subject, when in fact, you’re taking the phrase “Wow, she’s hot.” and expanding on that. Maybe if I get better, I’ll do more.

This may be a tough one, though.

My last entry in this part of the Shattered Lens was Olive Oyl. On seeing John Carter this past Friday, though, I couldn’t take my eyes off of Lynn Collins on the scenes she was in. Playing a princess with a warriors spirit (and an awesome tan), Collins quit smoking and went through a bit of training for the fight sequences. For this, and a number of other example, she becomes the Shattered Lens’ Hottie of the Day for March 11, 2012.

If she looks at all familiar, it’s probably because she’s had a number of films under her belt. Although she had a small part in Joel Schumacher’s “The Number 23” some years ago, Collins may be remembered best as Wolverine’s former love in X-Men Origins: Wolverine. In that film, she played Kayla Silverfox, a mutant with the ability to sway people’s minds via touch. She was later featured in Alan Ball’s Towelhead, as the girlfriend of the protagonist’s father. Ball would later go on to feature Collins in the first few episodes of HBO’s True Blood as Dawn, one of the barmaids at Merlotte’s who had a tryst with Jason Stackhouse. Though her character didn’t last through too many episodes, she made her short stay a memorable one. 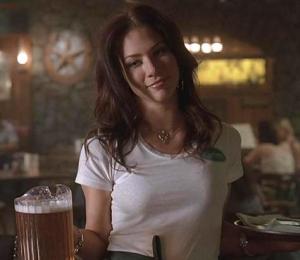 Lynn has been in a number of independent films, such as Numb with Matthew Perry, where she had to deal with Perry’s penchant for Kleptomania. She also starred in Uncertainty with Joseph Gordon-Levitt. Collins, a mix of Irish and Native American backgrounds, is married to fellow actor Steven Strait, who was in The Covenant (also with John Carter’s Taylor Kitsch) and Roland Emmerich’s 10,000 B.C.

Here’s hoping that we see a lot more of Collins in the years to come.

On a side note, I wouldn’t mind if it’s her face behind Tali’Zorah’s Quarian mask in Mass Effect 3. That’s just me. 🙂

22 responses to “Hottie of the Day: Lynn Collins”